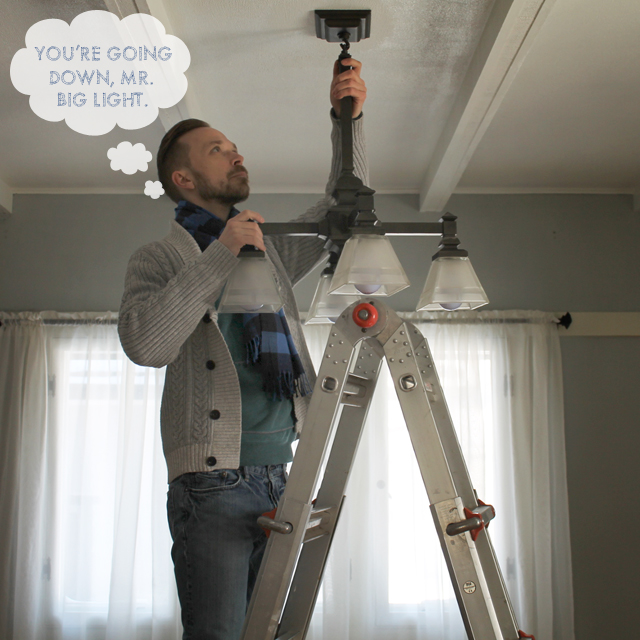 As I’ve been switching out lighting in the Dream House I’ve loved seeing what a difference a small change can make. As I posted previously, I’ve been replacing the existing light fixtures with porcelain lampholders and Edison bulbs. I started upstairs in the bedrooms and hallway and now I’m moving downstairs. Despite the fact that the rest of the dining room looks terrible (ugh, those sheers curtains!), I still want to post about saying goodbye to Mr. Big Light. 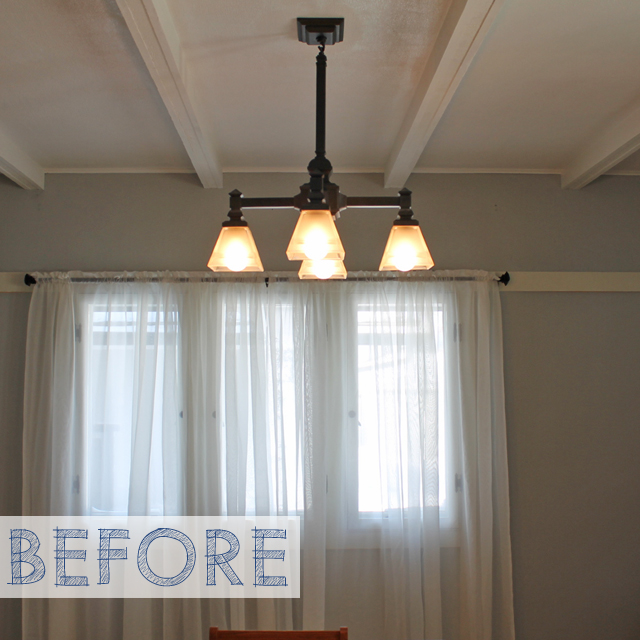 Now, I like the existing light fixture just fine. The style fits with the design of the house and it puts off pretty good light. What I don’t like about the fixture is that it feels too big for the space. And by too big I mean that it hangs down too far from the ceiling. The ceilings in the Dream House aren’t exactly high as it is, which is just how Frank Lloyd Wright designed them. As he pointed out in his book The Natural House

“Taking  a human being for my scale, I brought the whole house down in height to fit a normal one – ergo, 5’8 1/2″ tall, say. Thi is my own height. Believing in no other scale than the human being I broadened the mass out all I possibly could to bring it down into spaciousness. It has been said that we I three inches taller than 5′ 8 1/2″ all my houses would have been quite different in proportion. Probably.”

Wright was writing about his Usonian homes in a chapter titled “Building the New House,” but he must have had this design sensibility in mind even as he drew the plans for the American System Built homes in the nineteen-teens. Although the Prairie style Dream House is certainly different in appearance from Wright’s later Usonian homes, that nod to the vertically challenged is evident in the height of the rooms. It’s not that the ceilings feel particularly low but they’re definitely not soaring either. Having a large light fixture that extends two feet down into the room does, however, make the ceiling feel very low. 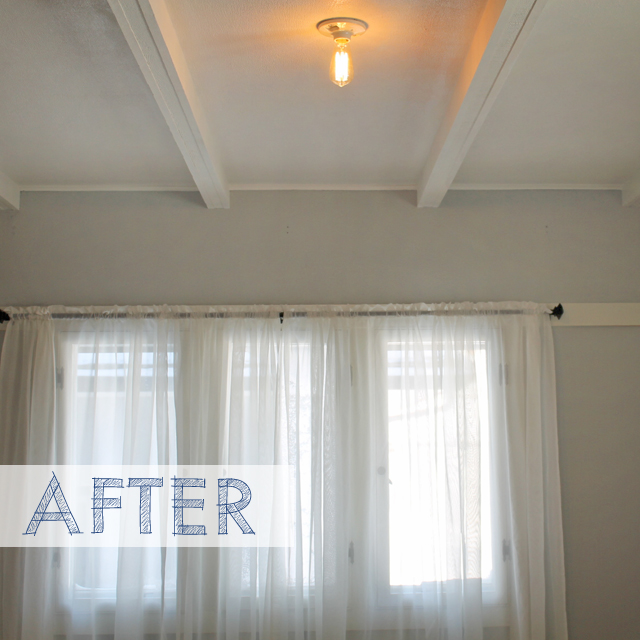 With the new bare bulb fixture in place, the room feels bigger and the ceiling higher. Of course, the 60 watt Edison bulb doesn’t provide as much light as the old fixture with four bulbs, but that’s what lamps are for. And just as soon as we get some furniture in this room, we’ll have a place to put lamps! Also, this bare bulb lighting solution is a just temporary measure. When we’ve gotten a dining table and some other furniture for the room, I’ll invest in a nicer permanent light fixture. 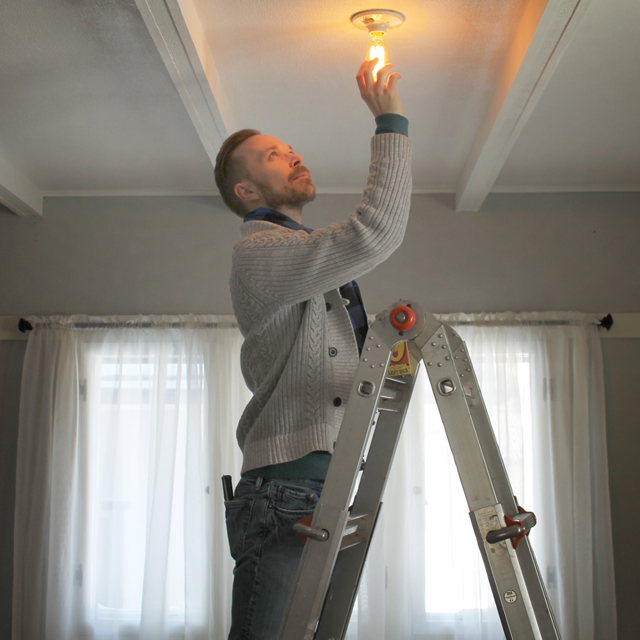 See how happy I look in the photo above? I am happy. I’m happy because the new light looks better in the room, of course. But I’m also happy because I didn’t injure myself while attempting to remove the heavy old light fixture on my own. For some illogical reason, I tend to start these big two-person projects when I’m home alone. Removing the big, heavy light meant balancing it on the top of the ladder, careful not to send it (or me!) crashing to the ground as I disconnected the wires. There were a few tense moments during the removal of the old light. If my life were a television show, there would have been suspenseful music playing and it would have cut to commercial just as I balanced on one foot, precariously attempting to hold my tools in one hand and the light fixture in another. I’m planning to either re-use the old light fixture or sell it so I really wanted to keep it (and me) in working order. Thankfully, no lights (or Misters) were harmed for this story.