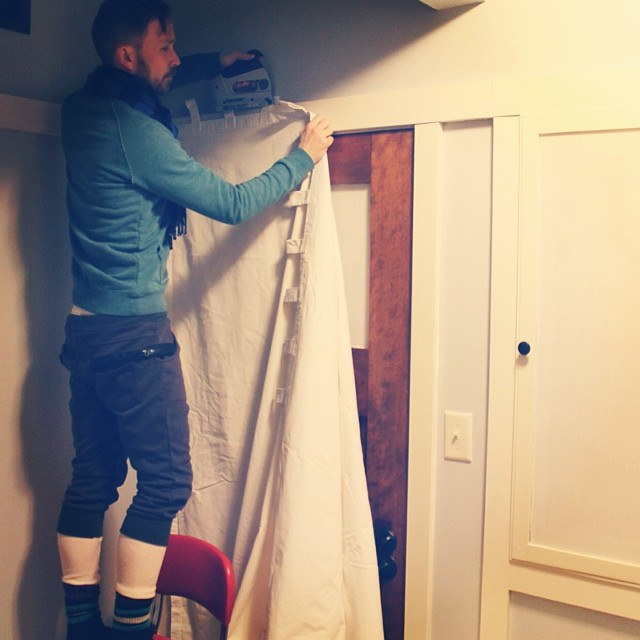 As a blizzard roared by the Dream House last night, I was hunkered down on the sofa, trying to stay warm. The winds last night were brutal. Sitting inside this big, old, quiet house, it sounded like a hurricane was raging outside. It was so windy, in fact, that if it were summer I would have been preparing my tornado evacuation plan.

Despite my multiple layers of clothes and two pairs of socks, I was still feeling the effects of the cold. It was almost as if I could feel the cold air drifting across the hardwood floors and right across  my feet. And in some ways, I could! As I walked past the front door a little while later, I noticed that some snow was blowing through the crack under the door and collecting in a little puddle inside the house. No wonder it’s so damned cold in the living room!

In a moment of “it may be ugly but at least it’ll help me stay warm,” I grabbed an old insulated curtain that had been left behind when we bought the house and stapled it over the door. I also placed a couple of rolled towels at the base of the door. Now, I’m not saying it suddenly felt like Tahiti in the Dream House, but providing this little extra layer of insulation did indeed help. Or maybe it was the second glass of scotch that helped!

When I woke this morning, the winds had died down and the sun had sprang up in the sky. It’s still cold as hell today, but I removed the curtain from the front door anyway. While the curtain was great in an emergency, we’ll need to find a more permanent (and less unsightly) way of adding some insulation to the front door. For now, I’ll keep the curtain and staple gun handy for future blizzards. And I’ll pray that spring makes an early appearance this year.