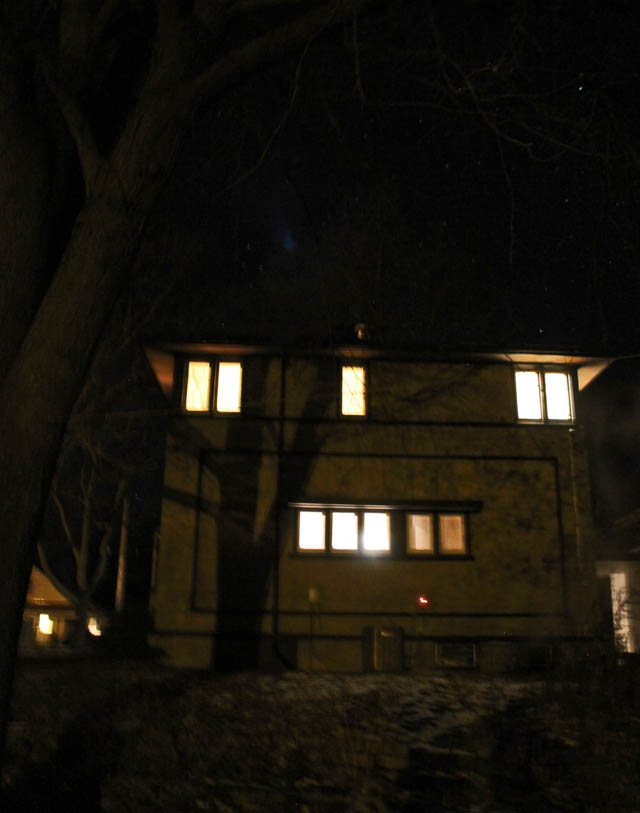 What ghosts walk the halls of the Dream House? With a hundred year old house, it’s a natural question to ask. I grew up in a house older than the Dream House, one that creaked and moaned its secrets throughout the night as I lay wide-eyed in my bed wondering who (or what) might be lurking behind the closet door, or in the attic, or even under the bed itself. It was a happy home, made so by my family and the richness of my childhood imagination and play in its every room, but there was always something forlorn about its dark corners; always a sense of being somehow observed. On one of my sleepless childhood nights, I’d actually (or think I may have actually) seen someone, some thing, in the hall outside my open bedroom door, pausing to look in at me: a woman, and yet not a physical being. It may have been a dream, of course, but it was still a well-remembered image in my mind when some years later my dad, in the course of insulating the attic, found a cache of old letters hidden under the floorboards. They’d evidently been secreted away up there by a woman named Anna, likely a boarder in the house during its previous incarnation as a rooming house during the First World War. The letters told the tale of an ill-starred love affair; he was not only married, but fearful of being drafted in the war, and together he and she were plotting their escape from the war and his wife to Canada. In spite of some sleuthing into old residential records in my town’s library, I was never able to find out their identities, or what became of their plan. Perhaps he’d been sent to war after all and had never returned, or perhaps he was a victim of the great influenza epidemic of that time. And perhaps she had then passed on in the house, though hadn’t really left. Was she my watcher in the corner, my visitor in the night? Or perhaps my ghost wasn’t she at all, but instead was the woman who had owned the rooming house, whose young son, I discovered in looking through old newspapers, had died of illness and had been laid out in the parlor. Under other floorboards in the attic, my father had also discovered a small crystal bowl filled with a boy’s treasures: marbles; a stick of gum; a dog tag from 1912; a lighter; gumballs. “Adventure” magazines of the era were also found hidden behind a false wall in the closet of my bedroom; likely his room also. Was I being watched over by another mother? Perhaps so. But also, oddly, mysteriously, once the house revealed these secrets, the house quieted. The sense of something apart from me and my family there departed once these artifacts were uncovered, and I chose to cherish them. Who knows – perhaps it gave whoever was lingering there their release at long last.

And now, I live in an another old house, one with an equally rich history, but one in which I detect nothing but great peace. It’s palpable as one moves from room to room in the Dream House; I even challenged myself once to stand in the middle of its basement in the middle of the night with the lights out and…nothing. There’s nothing there: no feeling of anything watching or lingering or moving through. From what we’ve able to learn about the house’s history, it has always been a well-loved space; built by its original owners as a retreat, and that sense about it remains. I sleep well when I’m there, even alone. There are no bumps in the night; no monsters under the bed or in the closets to contend with; only space for dreams. A Dream House, indeed.

Now, I wonder what might be up there in that attic?