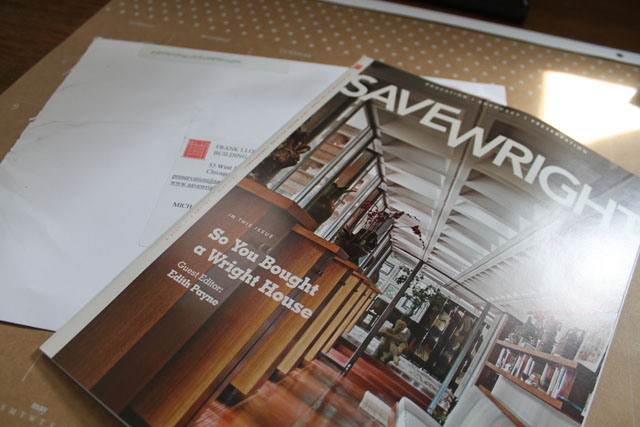 Maybe it’s because neither of us were particularly popular back in our high school days that The Mister and I are always flattered to be considered part of a club. When we returned to the Dream House after an extended absence last week, we were delighted to find a big envelope from The Frank Lloyd Wright Building Conservancy in the mail. Opening it, we were even more pleased to see a copy of Save Wright Magazine with a cover story titled “So You Bought a Wright House.” Welcome to the club, boys!

The issue of Save Wright that we received is from Fall 2010 and includes a number of helpful articles, including one titled Valuing and Pricing Wright Houses: General Principles. We won’t be selling the Dream House anytime in the near future, but we still enjoy reading pieces like this in the meantime.

I imagine this issue of the magazine is sent to all new Wright house owners. (Of course, it also includes a pitch to join the Conservancy with a donation.) This issue is a perfect introduction to the world of Wright house ownership. We’re sure to rely on the Frank Lloyd Wright Conservancy, as well as other American System-Built home owners, as we make changes and updates to the house. Our goal is to honor the house’s heritage in all of our updates. At the same time, we want to bring the house into the 21st century. After all, this is a house that’s meant to be inhabited, not a museum.

Although our house is not a pure Wright house, like Falling Water or one of his other custom designs, it is still an important part of the famed architect’s heritage. While Wright didn’t design the ASB homes for individual clients as he did with his more famous houses, the designs did come out of his office.  According to Wikipedia, Wright’s firm “produced over 960 drawings for the project, the largest number of drawings for any project in the Wright archives.” Considering the fact that of the roughly 30 American System-Built Homes that were built between 1914 and 1917, only about a dozen remain standing underscores the importance of maintaining these houses. As Wright’s first foray into pre-fab housing, ASB homes were an early precursor to the Usonian homes that would come later in his career.

We’re excited to be a part of the Wright club and hope we can do the architect and his designs justice.

One thought on “Welcome to the Club: So You Bought a Wright House”