House Research: What We Learned About Our American System Built-Home on A Trip to Avery Library 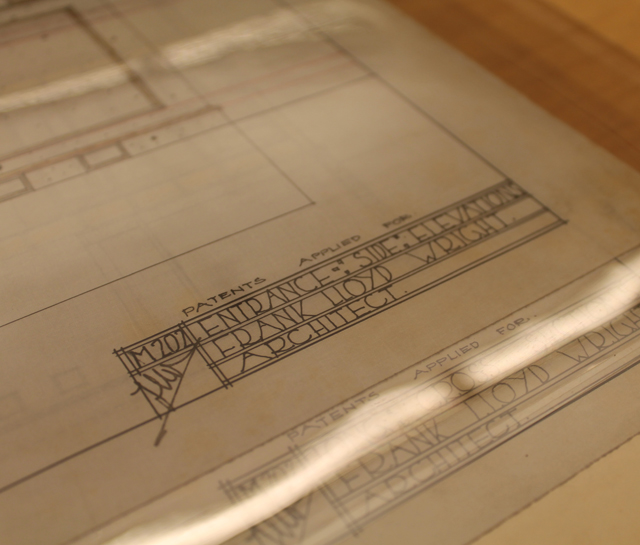 On our trip out East last month, The Mister and I made a pit stop at The Avery Architectural and Fine Arts Library at Columbia University. We had learned that the Frank Lloyd Wright archives were moved from Taliesen West, where they had been gathered and preserved by Mrs. Wright upon her husband’s death in 1959, to the Avery Library. More importantly, we learned that there was a big file on Wright’s American System-Built homes. We made an appointment to peruse the stacks and crossed our fingers that we would unearth some new details about our house.

We know from the blueprint that’s hanging in the house that ours is a model number M202 American System-Built home. While this gave us some idea of what to look for, we were informed that the ASB files were in no particular order. In fact, when we first arrived at The Avery, we were met by a very discouraging librarian.

“You know you’re not going to find anything on your house, don’t you?” she said.

“Maybe not,” The Mister replied, “but we’d like to look through the files and see what we can find.” 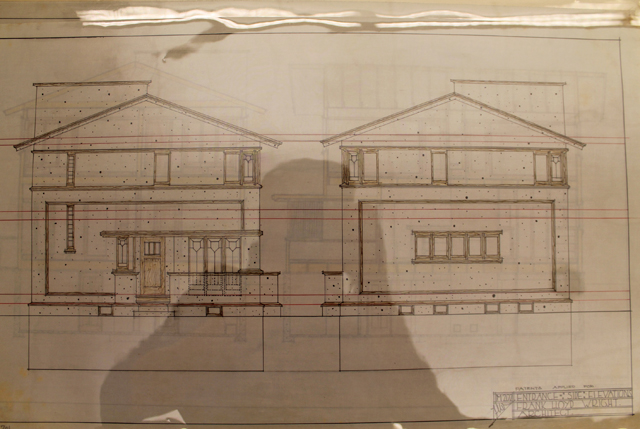 A nicer, younger librarian wheeled a cart out to us and placed an oversize manila folder stuffed with documents on the table. There were seven folders, she informed us, all filled with American System-Built home files. As we finished with one batch of documents she would bring us the next.

As we flipped through the floor plans and blueprints in that first folder, we started to wonder if the older, grumpier librarian had been correct. We saw blueprints for many of the larger, more expensive ASB models but didn’t see anything related to our house in that first folder. We did, however, get reprimanded by the curt librarian for the way we were handling the documents.

You see, every blueprint had been covered in shiny Mylar that made it impossible to photograph. When we would lay the prints flat on the table and try to photograph them, we would mostly capture the glare of the fluorescent lights or our shadows on the prints. Our solution to this was for The Mister to hold the documents vertically in front of him while I photographed them. It still wasn’t perfect, but we were at least able to capture better photos despite the Mylar.

We had photographed a dozen or so documents, none of which were directly related to our house, when the older librarian marched over to our table.

“You can’t do that!” she huffed. “You can’t pick them up that way. You have to keep them flat on the table. I’m sorry, but that’s just how it is.”

We both rolled our eyes but obliged. 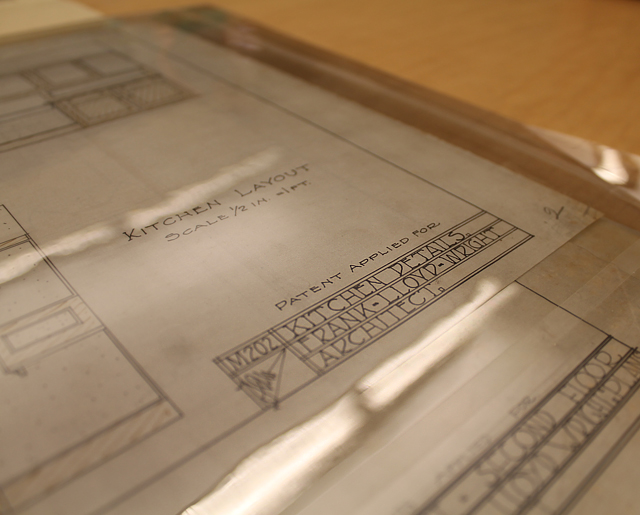 By the fifth folder of documents we were really becoming quite crestfallen. While we had uncovered a lot of interesting details about ASB homes, there wasn’t one single document devoted to our Model M202 house. Then, in the final few documents in that fifth folder, we started seeing plans that looked like our house. And there in the bottom right corner was our model number, along with Frank Lloyd Wright’s initials. Bingo!

Of the documents we uncovered in those stacks, there were a few that were particularly important. First, there are the kitchen details. This floor plan shows how the kitchen would have originally been structured back in 1917. As I’ve mentioned in a previous post, we’d like to reclaim the original kitchen cabinetry that’s languishing in the garage. Having the kitchen details will be extremely helpful in that task. 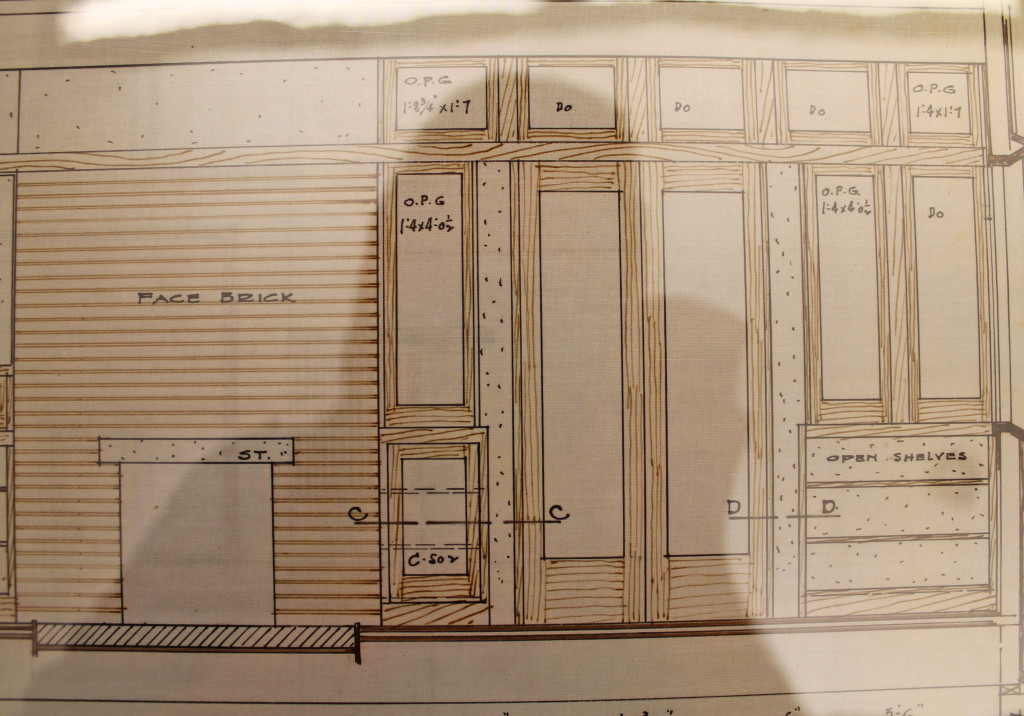 Another exciting discovery was the plans that show the built-ins that might have been in the living room. I say might have because we don’t know whether Delbert Meier actually chose to have the built-ins constructed when he had his model M202 built in 1917. What it does prove, however, is that the doors that we found in the rafters and re-installed in the doorway between the living room and dining room are indeed original to the house. When I first wrote about the doors back in May we heard from a Wright scholar that there is no way these doors would have been original. Surprise! They’re right there in the original plans for the house – along with some amazing looking built-ins surrounding the fireplace. 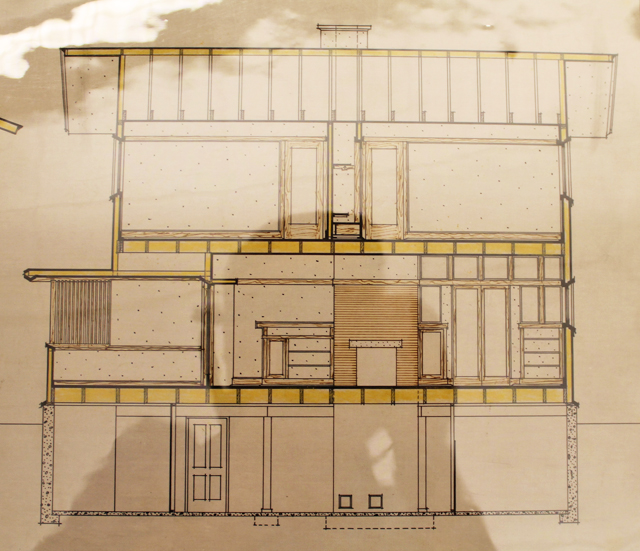 Of all the documents, the kitchen and built-in plans have the most potential for being useful to us in our renovations. That’s not to say that all the other plans we uncovered weren’t exciting. Looking at original documents for a house built almost 100 years ago is exciting in and of itself. And thinking that Frank Lloyd Wright and his team would have toiled over the plans for our house is quite thrilling. In addition to the reclaimed doors, it’s also nice to see that some other features, like the windows and the glass doors that lead to the sun room, are also original to the house.

After we snapped photos of all the documents related to our house, we triumphantly faced the grumpy librarian. We had indeed found many items related to our house, we informed her. But oh how the Mylar had proven difficult when trying to photograph them! The librarian seemed to warm to us a bit when she heard that we found our house in the stacks. She then went on to inform us that while the imaging library is being remodeled, we could check back in early 2015 to see if we could have all of the documents photographed.

“Our photographer will be able to deal with the Mylar,” she said.

Like I said, she warmed to us a bit.