bathroom, before & after, renovation

Making Progress in the Bathroom 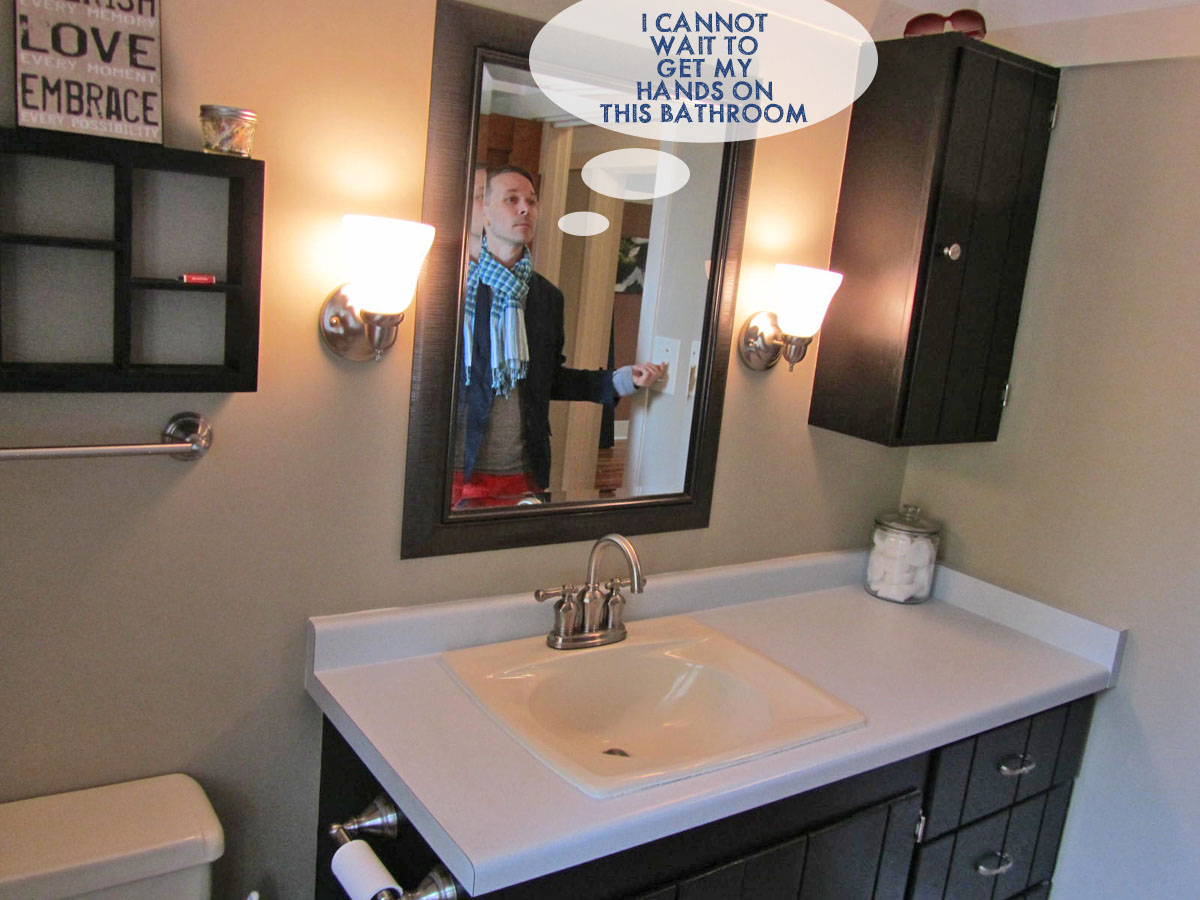 A man who is very familiar with DIY house projects and renovations gave us some great advice when we first bought the Delbert Meier House. “Guys,” he said, “its going to be hard to resist, but don’t start a bunch of projects all at once. Go from room to room, finishing one project before moving on to the next.”

Great advice indeed. Did we heed this friend’s recommendation on how to approach our house projects? Of course not! We dived right in and started projects in every room. Along the way we re-adjusted some of our big plans to be a little more cost conscious. The bathroom is one of those projects. 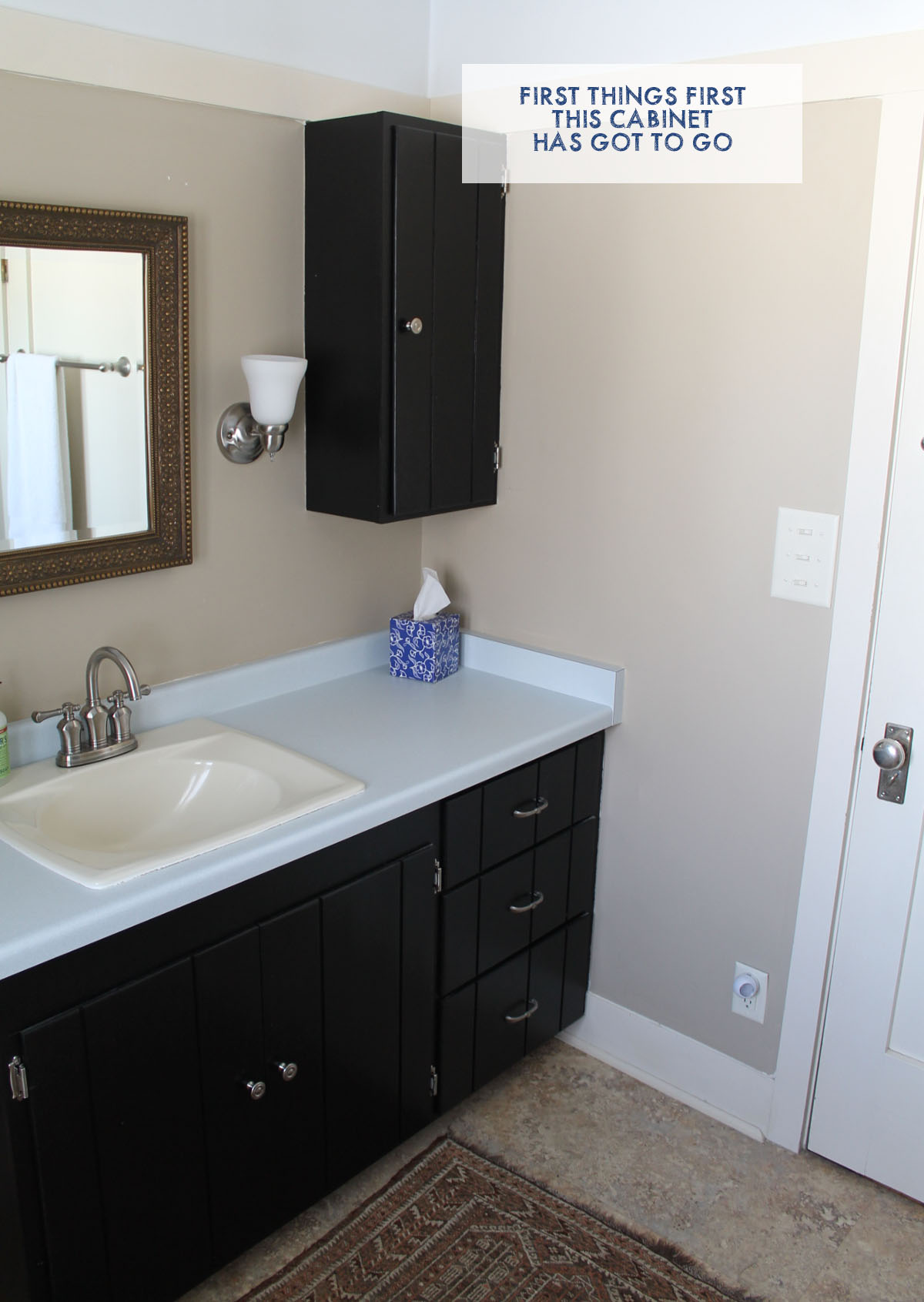 From the very first time we walked through the house I had a vision for the bathroom. I thought I’d rip out the vanity and upper cabinet and replace the flooring and fixtures. Basically, I wanted to gut the bathroom and create something with a more vintage look. You know, white hex tile floor and pedestal sink. But that could wait, we told ourselves, while we took on some other more pressing projects. 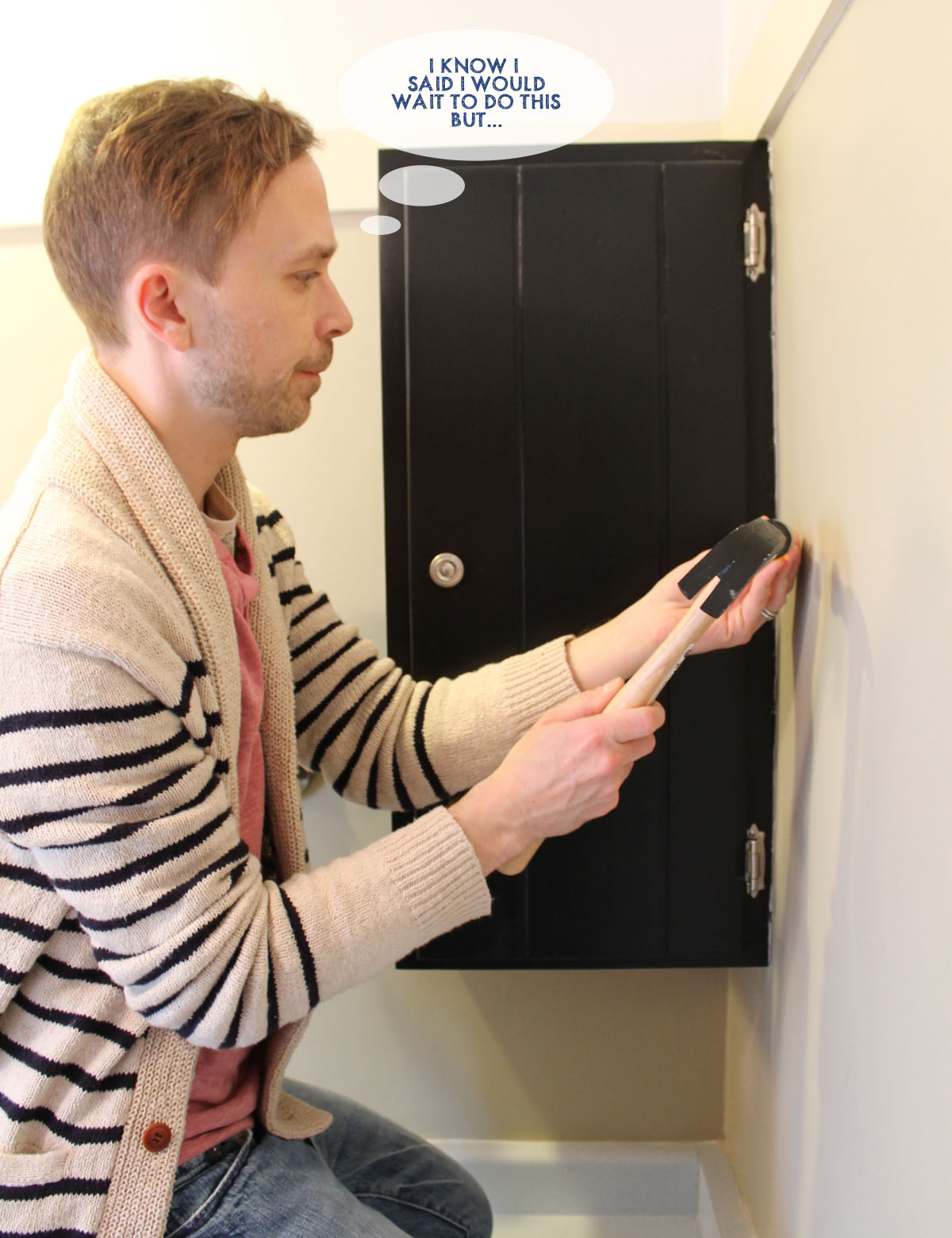 And then one day I decided that the corner cabinet just had to go. I may not have been ready to delve into a full rehab but I could at least pull out that cabinet and thus open up the space a bit. Well, the funny thing about old houses is that even the little jobs aren’t quite as easy as they might seem. Removing the cabinet took a lot of tools, a fair amount of swearing and brute force. 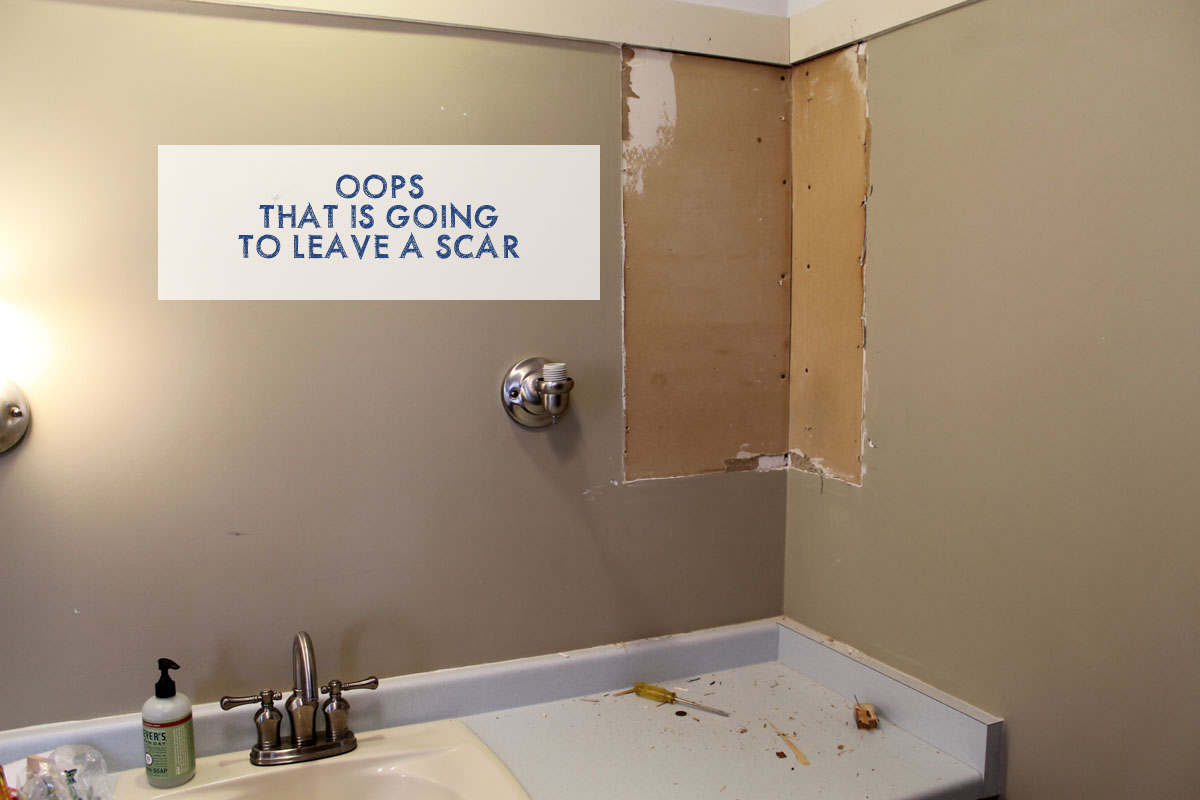 Once the cabinet was removed we were faced with an unsightly scar on the wall. It seems that the cabinet had been installed directly over the new drywall that had probably gone up when the bathroom was first rehabbed years ago. OK, no worries, we’ll just patch the wall and reassess what we want to do with the bathroom. 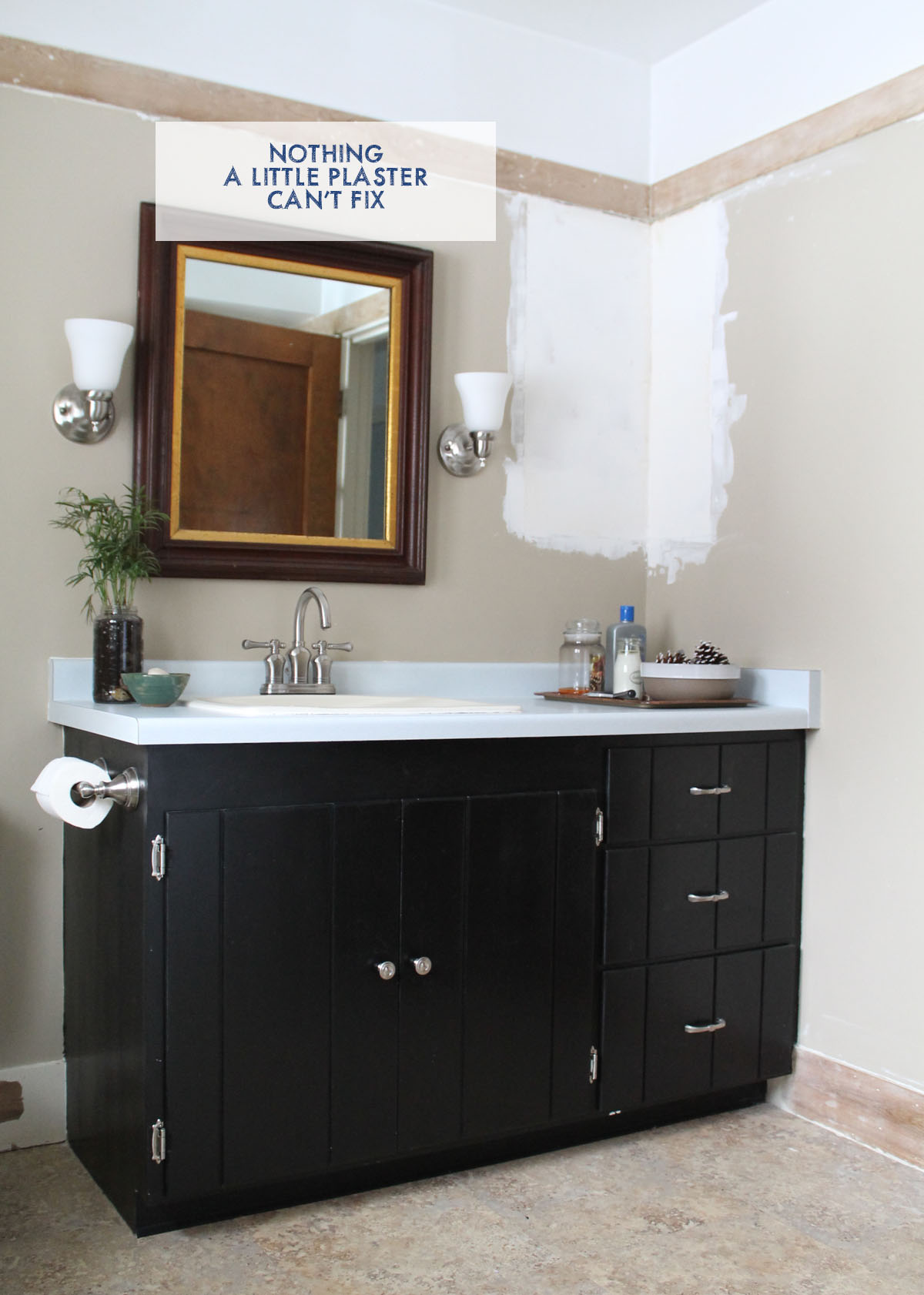 So we patched the wall and stripped the wood trim and took some time to consider whether we wanted to gut the bathroom and start fresh or just give it a quick update. And then the toilet needed to be replaced, which brought up the question of whether we wanted to replace the flooring right then or wait until later. (It seemed silly to have a new toilet installed and then come back and replace the flooring.) That was when we officially decided to gussy up the bathroom with what’s in place and come back for a full renovation sometime down the road. 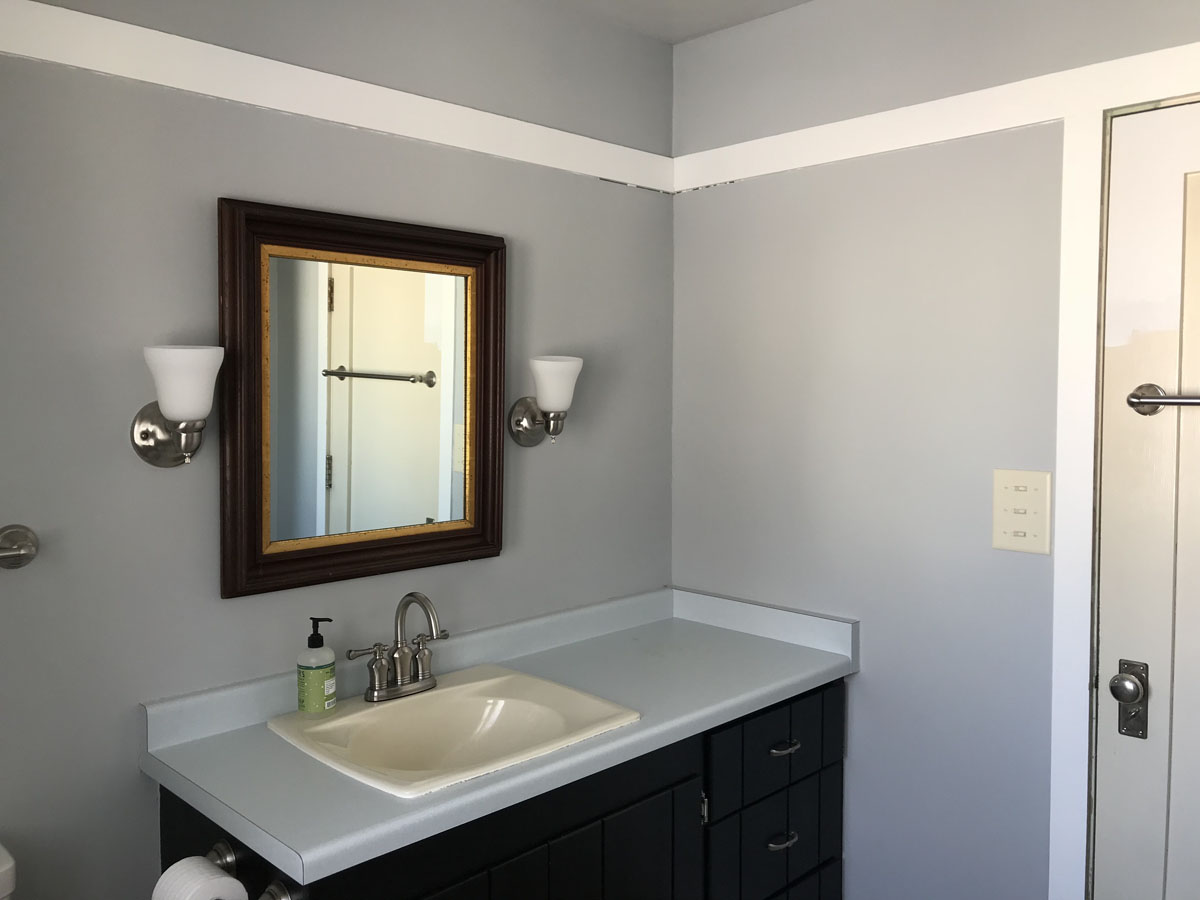 So we painted the walls in the same gray that we used in all the other rooms and also re-painted the wood trim in a bright and glossy white. I may not have gotten the vintage-y bathroom that I had originally planned, but I have gotten one that’s brighter. 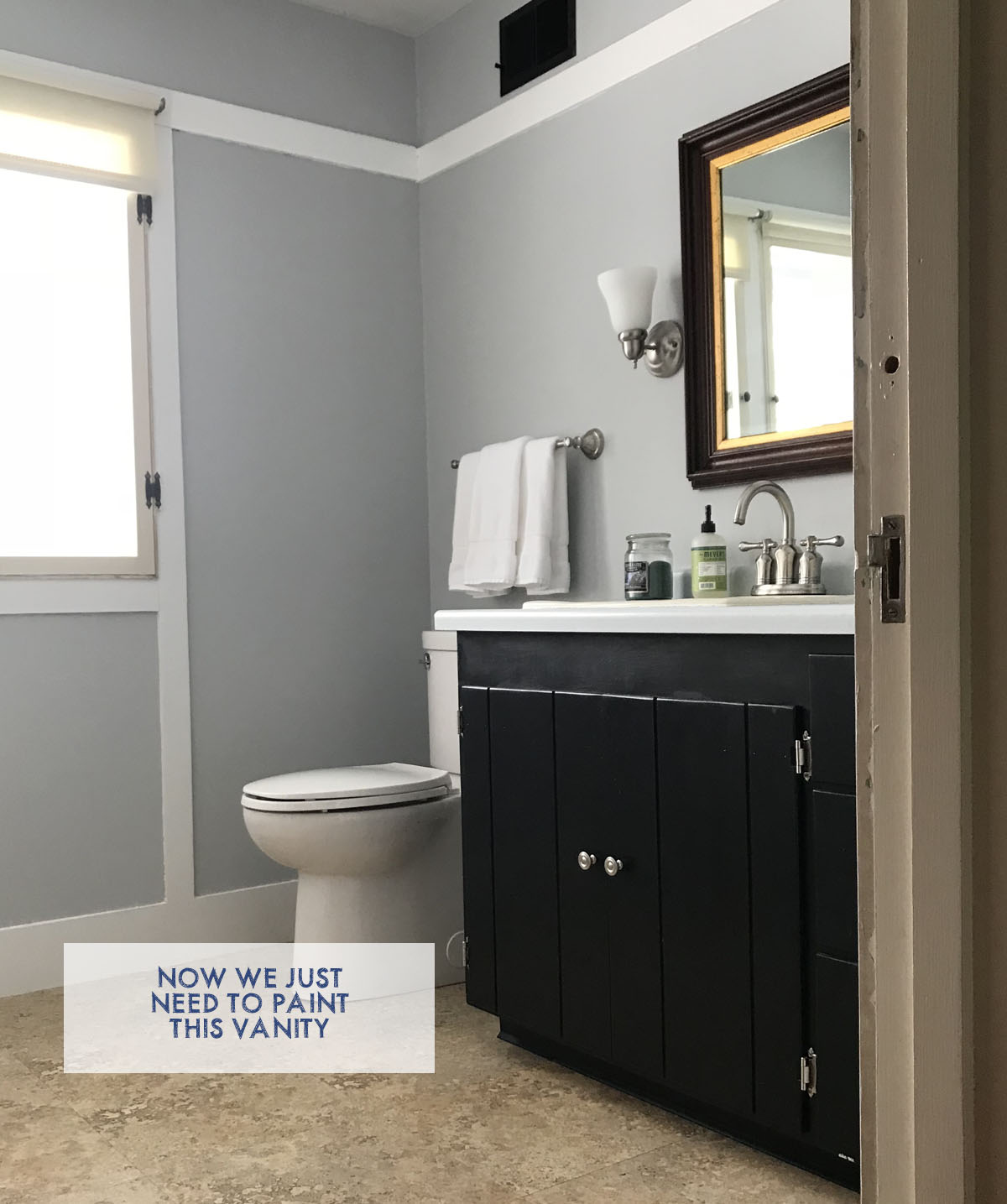 Now that we have a new toilet and freshly painted walls and trim, the only task remaining is to makeover the vanity and sink. The plan at this point is to paint the vanity and replace the formica top, sink and faucet. I’m thinking I’ll paint the vanity with the same bright white that we used on the trim to bring even more lightness to the space. We’ll then replace the counter top with a dark wood top and then drop in a white sink.

If there’s one thing I’ve learned about owning and rehabbing an old house, it’s that sometimes you have to compromise. This gussied up bathroom is an improvement over what was there when we moved in. And maybe someday in the future I’ll get the new and improved version that I have in mind.

Down to the Details: Pergo Laminate Flooring in the Basement Bathroom

Leave a Reply to A WORK IN PROGRESS Cancel Reply