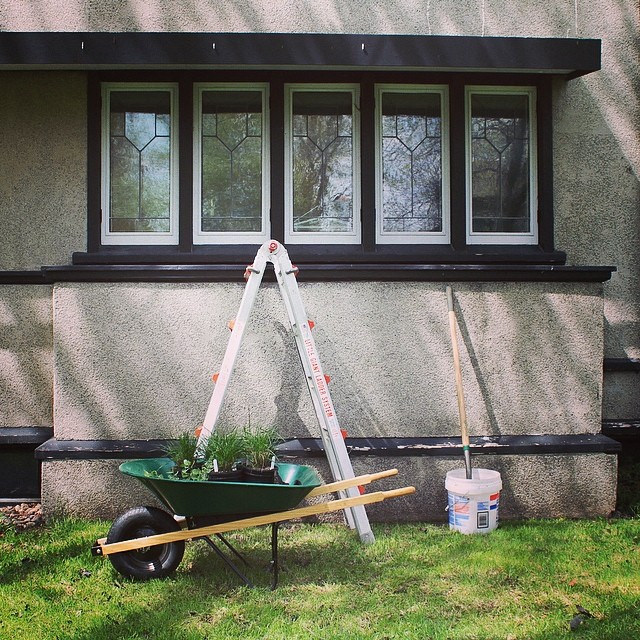 I’ve been waiting all winter for this. Seriously, I sounded like a broken record all winter long. I can’t wait to get my hands on that window box, I would say over and over again. I’m going to plant some decorative grasses in there as soon as I’m able, I promised. Last weekend, I did just that. My next test in patience will be seeing if it grows!

This window box is one of the features that attracted us to the house. A built-in flower box would be neat on any house, of course, but on a Frank Lloyd Wright designed house it’s practically mandatory. Throughout the winter months the window box would fill with water and leaves and then freeze and thaw and basically become a mucky mess. This spring, the window box became a little lake that would create dancing reflections on the living room ceiling. As cute as that reflecting light might have been, I’ve been envisioning prairie grass in that box all winter long. 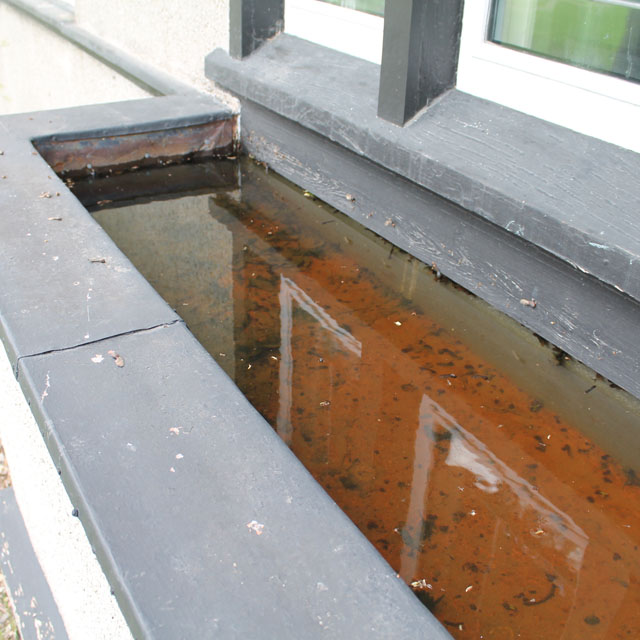 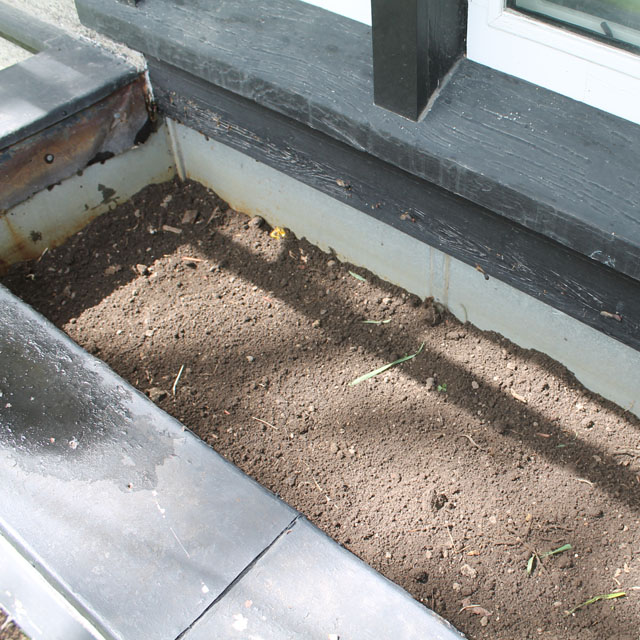 With the water gone, I was ready to fill the box with soil. I used an empty vegetable bed in the garden – one that had previously been covered with leaves and compost – to start filling the window box. I filled the wheelbarrow four times, schlepped the loads to the house and got the dirt into the window box by bucket loads. Those four loads of dirt gave me a nice base layer in the window box – about six inches I’d say. It also gave me a back ache. 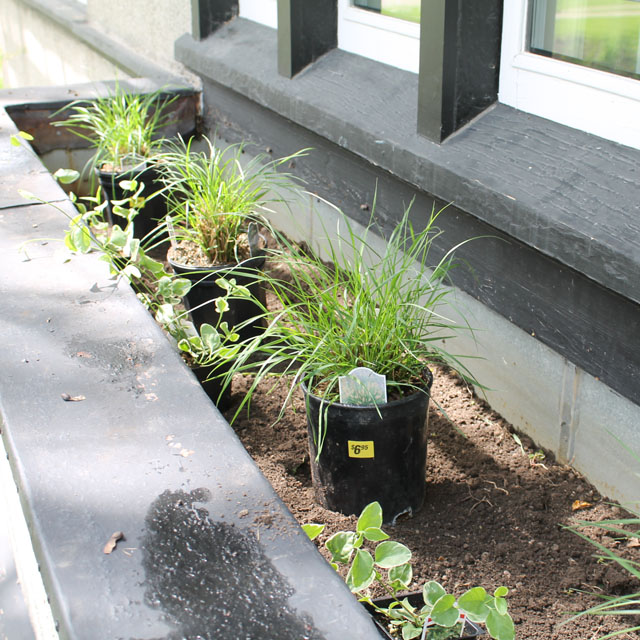 Next, I placed the plants (still in their containers) in the bed to position them. I had five prairie grass plants and a few vines to work with. There are five windows above the flower box so I centered the grasses with each window. I put the vines toward the front of the bed with the hope that they’ll hang over the side once they start growing. 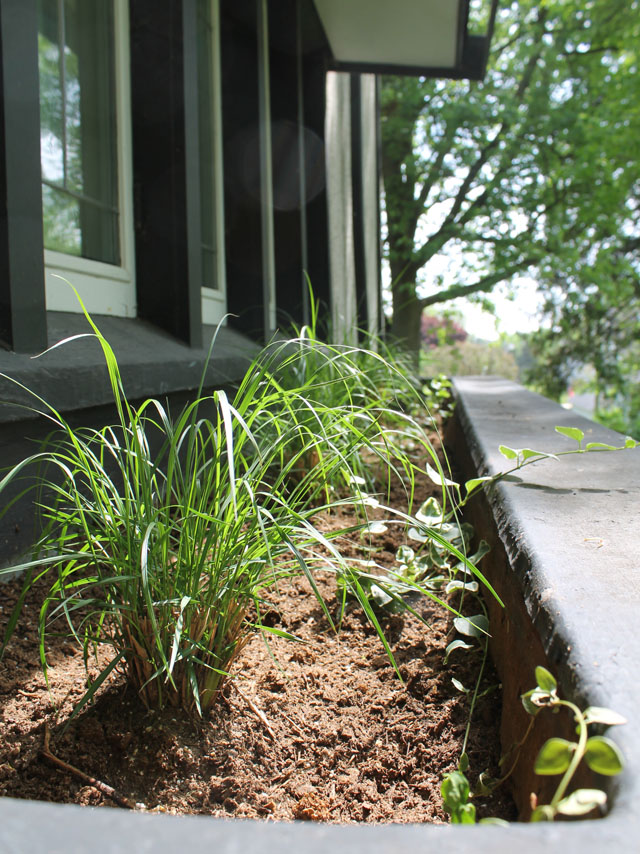 With the plants placed I removed them from their containers and filled the window box with bagged soil. Fortunately, I had the foresight to think that I might tire of schlepping wheelbarrow loads of dirt across the yard so I bought three big bags of soil while I was buying the grasses. Am I ever glad I did! The bagged soil was much, much easier to get into the window box.

My hope here is that the grasses will get nice and tall and create a swaying field of prairie grass outside the living room window. For now, it looks like this: 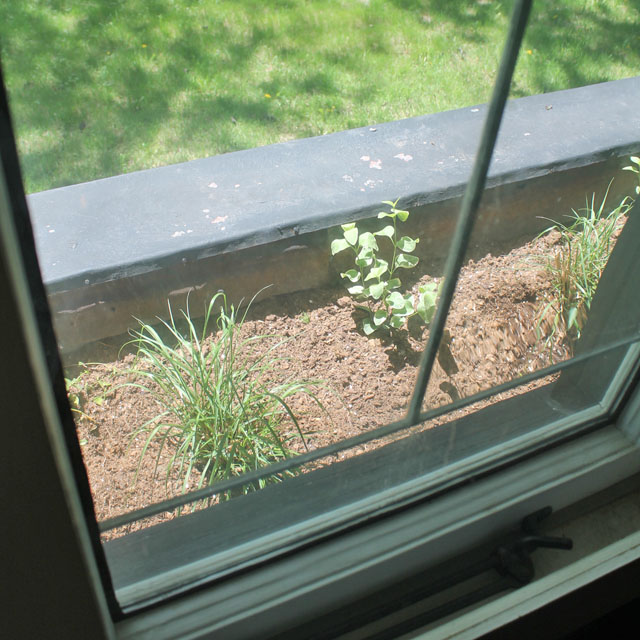 Pray for rain, kids. We went the grass to grow!

Welcome to the Carriage House: An Artful Mess