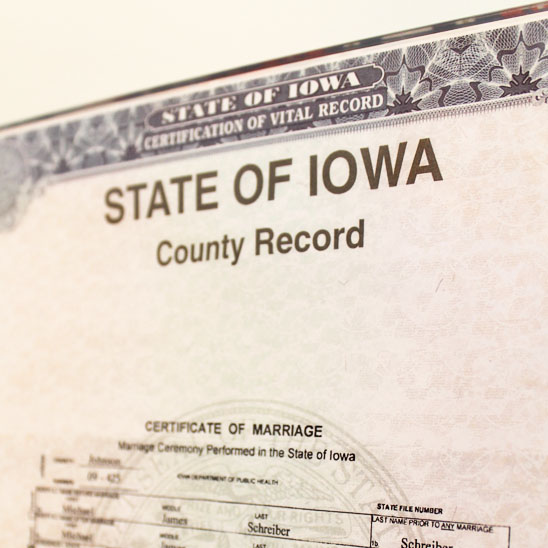 Whenever we start talking about our house, especially to our city friends, one of the first questions we get is, “Why Iowa?” We usually pause a moment and maybe mutter something about how we fell in love with the house and that’s what brought us to the Hawkeye State. But, actually, our connection to Iowa goes a little deeper than that.

When I first meet people in our new hometown they inevitably ask, “So what brought you to Iowa? Are you from here? Do you have family around here?” The short answer is no. Neither of us were born in Iowa nor do we have any family in the state. (Well, actually, The Mister has a cousin and great-aunt in Iowa but that was something we learned only after we bought the house.) Although we lack a familial history in Iowa, we do have a very special connection to the state.

Our first experiences in Iowa came about when we started taking summer trips to escape city life. We found a state park in Iowa that rented cabins and each time we stayed there we would comment that it seemed like the perfect place. The landscape was beautiful, the people were friendly and we were within driving distance of the city. On each of these trips we would joke about moving to Iowa someday.

And then, on April 3, 2009, Iowa became the third U.S. state, and the first in the Midwest, to allow same sex marriage. Shortly thereafter The Mister proposed getting hitched in Iowa. I had long maintained that I didn’t see the point of getting married unless it was in our home state. But, then, Iowa is right next door to Illinois and, well, I’m a sucker for love. And so it was on this day, June 9th, back in 2009, that The Mister and I made the trek from Chicago to Iowa City, where, after ten years as a committed couple, we legally wed.

It was a wonderful experience. We were delighted to finally be afforded the same marriage rights as opposite sex couples, even if it wasn’t in our home state. And we were relieved to find that the people of Iowa seemed genuinely happy for us. As we made our way to the courthouse to file our paperwork, we were congratulated by strangers. At the bed and breakfast where we stayed, a straight couple who had just been married gave use some of their leftover flowers and congratulated us on finally being able to wed. On that summer day five years ago, we became instant fans of the state of Iowa. Unlike Wisconsin and Indiana, where we had experienced some rather blatant homophobia, Iowa fully embraced us.

We had no idea that we would one day actually own a home in Iowa. It seemed like a silly pipe dream when we would talk about ditching city life for a simpler way of living in Iowa. And, yet, here we are, the proud owners of a historic home in a small town. And here we are, a married couple who is treated like any other couple, embraced by the community and welcomed with open arms.

To you, Iowa, we say thank you. Thank you for being a forerunner in the fight for gay marriage. (Have you noticed how all the other states are starting to follow suit? You’re such a trendsetter, Iowa!)

And thank you for being populated by friendly folks, Iowa. We’re proud to say we’re one of you now.