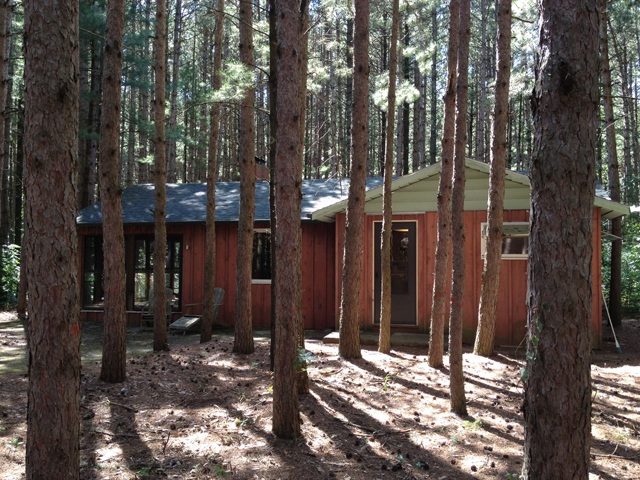 Like I said in the introduction post, we’ve been looking for our dream house for a number of months. We’ve relied heavily on Google Maps and other satellite imagery to try to suss out whether a property was in a desirable area before we did a drive by. Let me tell you, when you’re looking for a house long distance, Google Streetview is your best friend. If we got interested in a listing, we look at satellite and Streetview images for the address to make sure it wasn’t sitting next to a big industrial sight or a trailer park or some such. Still, Over the course of the summer we spent countless hours driving around to small towns and rural areas hours outside the city. Even with satellite images, location can be deceiving. And even if location was perfect, sometimes the house itself looked nothing like the ad had suggested.

We had a few false starts by the time we came across this cabin nestled in a small pine forest. After driving by a few clunker houses and feeling discouraged, finding this little cabin seemed very promising. We requested more information from the real estate agent and then studied the location on Google Maps. The Streetview option wasn’t available for this location so we had to rely solely on satellite imagery. The location looked pretty desirable – secluded but near a thriving small town and within 3 1/2 hours of the city. There were a few houses nearby but we didn’t see any trailer parks or highways. So we finally made the trek out to see it.

The location was indeed close to perfect. When I say it was nestled in pine trees, I mean it. From the road, the house was practically invisible. As we pulled into the driveway, all we could see were trees and wild greenery. Because there’s a turn in the driveway that leads to the house and garage, the driveway seems to dead end in the forest. I think we both let out a little squeal when we first pulled into the driveway. Yeah, we’ve never been very good at hiding our excitement. After seeing a few terribly ugly houses and properties, we sorely needed the delight of a good one. 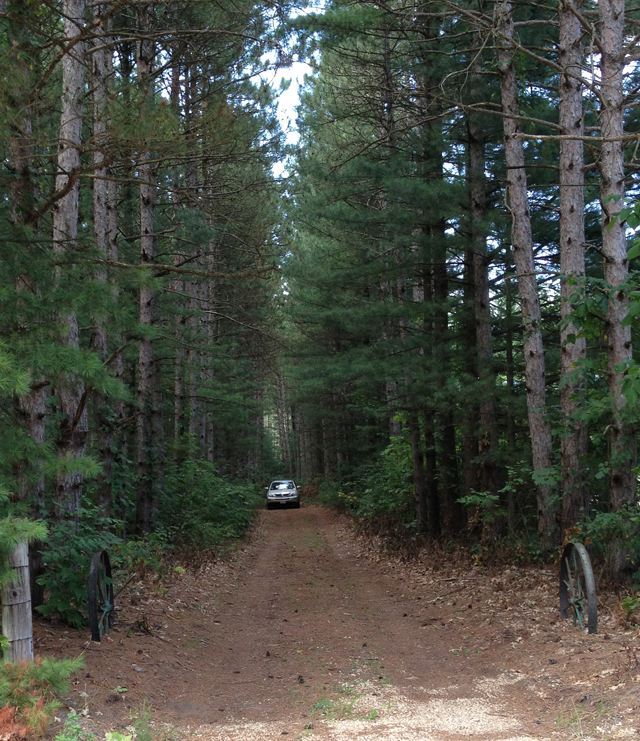 The house itself was tiny. Like, smaller than our apartment tiny. Built in 1977, the house has always been used as a rustic cabin. Many of the houses around it were built as cabins and second homes around the same time and, In recent years, most of those have been rebuilt as year round homes.

Despite its modest size, we saw potential in this house. With a two car garage and another small woodshed, the sat on enough acreage that we could imagine potential for future growth. Whether we converted the garage into a separate studio or built a new small structure on the property, we knew we’d have room to grow.

We even saw potential in the house itself. With two small bedrooms, a tiny bathroom, galley kitchen and living room, there’s roughly 700 square feet of living space inside. There’s also a large screened three season porch that bumps the square footage up by almost 200. We had visions of painting all the pine paneling white and knocking down the wall that divides the two bedrooms to create one big room. We made plans for simplifying the kitchen and modernizing the bathroom. But more than anything, we imagined using the big fireplace in the living room.

The second we walked into the cabin the first time, we both breathed in deeply and announced, “Mmm, I smell the fireplace.” We probably even said it in unison. In this tiny little house, the fireplace was the main feature, both visually and aromatically. We decided that we could overlook the limited square footage and vintage cabin kitchen in exchange for the fireplace and the seclusion of the pines. 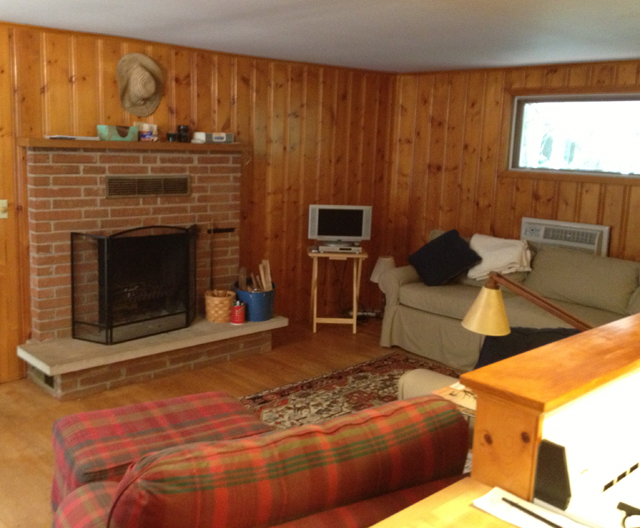 We didn’t make an offer that day but we had made one within the week. It was a pretty quick little process, actually. We made the offer one day, the seller countered the next and we accepted the counter immediately. It was on my birthday, as we were standing in front of the Frank Lloyd Wright Preservation Trust office in The Rookery building that we saw the email with the seller’s counter offer. Since the house is near a town with a lot of notable Frank Lloyd Wright tourism, the setting for receiving the news seemed perfect. It also seemed like the best birthday present ever!

Oh, but not so fast. Things can’t be that easy! A week later after signing the contract, we returned to the house for the inspection. We found the real estate agent sitting in the house and she directed us to the inspector around back. After we introduced ourselves to the inspector, he started telling us about having trouble finding the septic system. Mr. Blandings and I glanced at each other with a look of “oh shit.” As it turns out, oh shit indeed.

When the inspector did find the septic system, we couldn’t believe our eyes. It seems that the man who hand built this cabin in 1977 also built his own septic system. Buried in a shallow little hole was a small propane tank that had been retrofit to be used as the septic system.

“Oh, this isn’t good,” the inspector said. “I can’t believe no one has fallen into this thing. Look at how the top is all rusted out.”

Can you imagine falling into a tank full of sewage? Oh shit!

The inspector turned up a few other small problems but nothing could top the septic issue. Mr. Blandings and I talked about trying to work with the seller to fix the problem and try to split the cost but eventually we walked away. The seller wanted to remove the listing completely and have the septic system completely replaced before trying to sell it again.

Of course, we were heartbroken. We had started looking at paint swatches and brainstorming little measures we could take to make the house more comfortable. We were already planning our first Christmas in the house. I knew exactly where I was going to put the Christmas tree.

But what are you going to do? There was no way we would buy the house with the septic system as-is – even though the real estate agent tried to talk us into it. And now in hindsight we can see that perhaps the house would have been too small anyway. I mean, the whole reason we want to find our dream home is so we can stretch out. Exactly how much do we think we could stretch in a house that’s smaller than the apartment?

And so the search for the dream house continues…