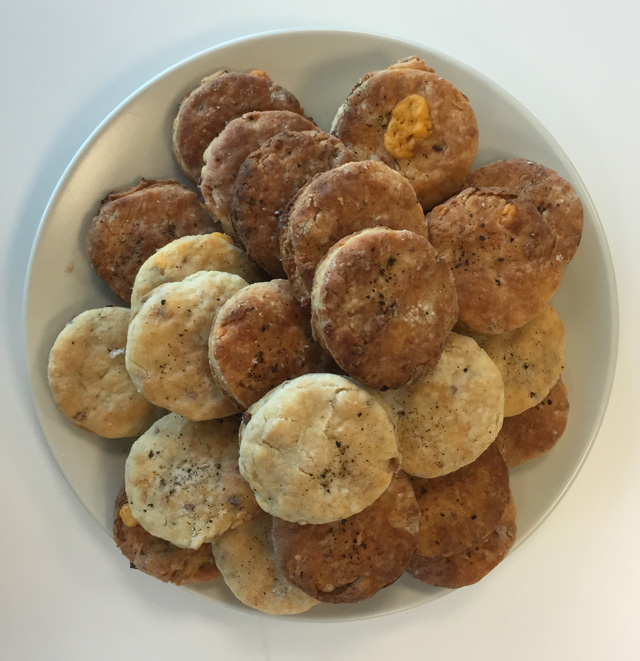 At my day job last Friday we had a Super Bowl potluck party. My contribution was this plate of bacon cheddar biscuits.

“Gee, Jason,” I can hear you asking. “Why are your biscuits two different colors?”

Oh, you noticed that, did you? Well there’s a simple reason some of the biscuits are darker than the others: I burned them. In an attempt to multi-task Thursday night, I was ironing clothes, listening to music and telling The Mister some sort of riveting story. My first batch of perfectly golden biscuits was cooling on a wire rack on the counter and the next batch was baking in the oven. I guess I was so distracted that I didn’t hear the over timer beep. Five minutes later, I caught a whiff of my biscuits starting to burn.

As I pulled the dark brown biscuits out of the oven, I spat out a few curse words and considered dumping them in the garbage. Before I did, I picked one off the baking sheet and bit into it. While the biscuit was a little crunchier than I would have liked, it still tasted fine.

“Here,” I said as I thrust a biscuit in The Mister’s direction. “Do you think I can still take these to work tomorrow?”

“Sure,” said The Mister between bites. “They taste fine to me. And isn’t that what really matters – how they taste and not how they look?”

“That’s true. But I hate showing up with a burned biscuits. I have a reputation as a good cook to uphold!”

It wasn’t until I was placing the biscuits in a container for their journey to the office that I finally decided that the burned biscuits were just fine. In fact, I finally reasoned, that the biscuits are burned is proof that they’re homemade versus store bought. When things are homemade, sometimes they’re imperfect.

And that’s the nature of doing it yourself. Sometimes things go wrong and you just have to deal with it. Whether it’s burning the biscuits or discovering that the faucet you just installed is a little too heavy for your stainless steel sink, life as a DIYer is full of surprises. It’s how you deal with those surprises that defines you as a maker. You can either say, “I suck at this! I’m never doing this again!” Or, and this is the path I recommend, you can say, “Oops, that didn’t work out so well this time. I’ll remember this lesson and really kick some ass next time!”

For the record, the biscuits were a hit.