Getting High with Mr. Belvedere: Repairing the Leaking Roof 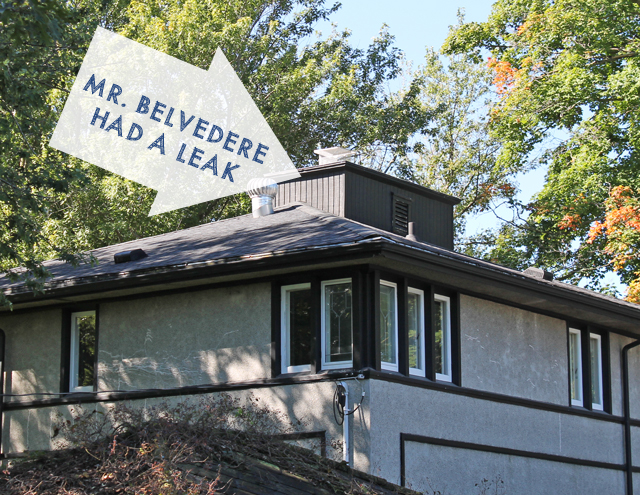 Back in the 1980s, when I was impressionable young lad with a lot of time on my hands, I spent a lot of time watching television. I was easily entertained back then and was particularly drawn to family sitcoms. Mr. Belvedere, one such sitcom, was one of those shows that entertained me. This is the one line synopsis from IMDB: “The humorous adventures of an English housekeeper working for an American family.”  That really does say it all. Christopher Hewett plays an English gentleman who uses his proper English traditions and manners to keep a typical American family, led by Bob Uecker, in line. Hilarity ensues. Well, I’m sure the term ‘hilarity’ is relative. What was funny to me when I was 10 to 15 years old would probably not hold up today.

This is all to say that when we learned that the little box that sits on the top of the roof is called a belvedere, the first thing I thought of was Mr. Belvedere. And since that discovery I’ve been referring to the the rooftop box as Mr. Belvedere. As in, Mr. Belvedere sprang a leak!

Now, technically, this is not really a belvedere. By definition, belvedere is “an architectural term for a structure in the form of a turret or other vantage point designed to incorporate a view.” As there are no windows on our belvedere, it shouldn’t really be referred to as one. As we don’t have any other name for it, however, I’m going to stick with calling it a belvedere. 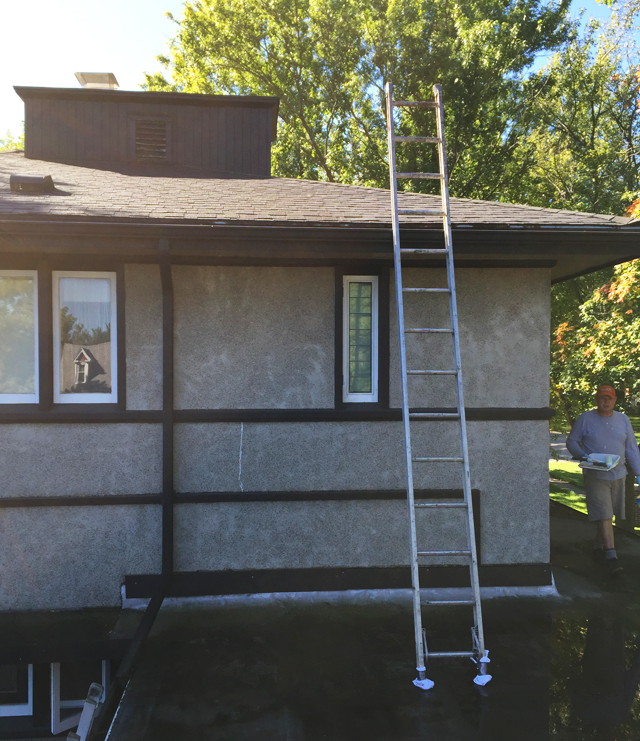 One night while a friend and I were watching a movie, I kept thinking I heard dripping. It was raining that night and I just assumed that the drip was coming from outside. It wasn’t until I was on my way to the restroom that I noticed the little puddle of water that had collected in the upstairs hallway directly under the attic door. It was dark that night and I had a couple glasses of scotch in me so my first solution was to place a bucket under the drip. Given my tipsy state, it seemed safer to wait until daylight (and sobriety) to climb into the attic to investigate the drip.

In the light of day I was able to locate the general area of the drip. I was pleased to discover that the leak didn’t seem to be coming from the main roof. Instead, the water was leaking from the belvedere. Of course, there’s nothing we could do about the leak from inside the attic. This would require some Spiderman style investigation up on the roof. 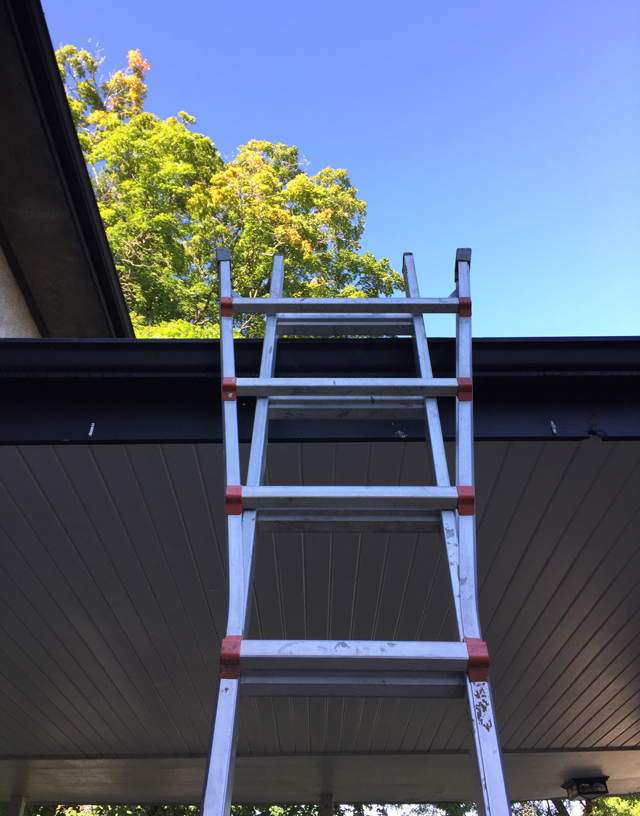 The first time I climbed up on the roof, The Mister held the ladder and loudly worried about my safety. I was worried about my safety too. The Mister’s knees knocked so much from worry that he was shaking the ladder! It also happened to be one of the hottest days of the summer which made the roof feel like the surface of the sun. I climbed up, surveyed the rooftop and then climbed back down again. When I relayed this story to our friend Steve later that night he volunteered to lend a hand in repairing the roof.

Climbing up and getting on the roof is actually pretty easy. That is, it was easy once we figured out the best way to get up there. Last year when I cleaned the windows, I discovered exactly how TALL the house is. While our extension ladder reaches up to the roof, climbing up there from ground level is absolutely frightening. Climbing up to the addition that connects the house to the garage and then up another ladder to the roof of the house, on the other hand, is quite easy. And once on the roof I was happy to discover that it isn’t steeply pitched. I was also happy to see that the shingles on the roof appear to be in great shape. It’s just the belvedere that needs a little attention. 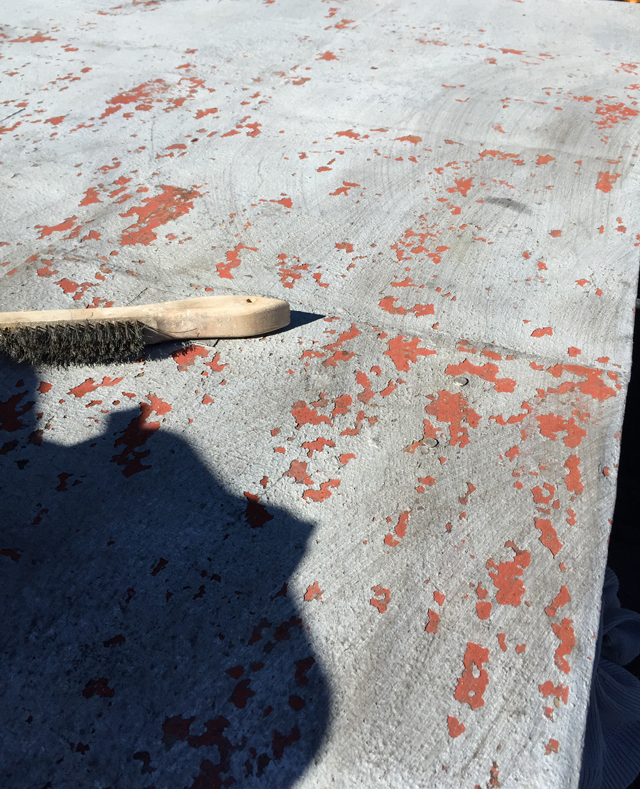 The roof of the belvedere is flat and covered in a sheet of metal. The top layer of sealant is the silver, heat reflecting type. Under that is some red paint that I assume was also a sealer. I used a steel brush to try to scrape off the loose flakes of old sealant before applying a thick coat of Sta-Kool Elastomeric Roof Coat

to the entire surface. I took a paint tray up to the roof with us but Steve had the wonderful idea of simply pouring the roof coat onto the roof and then using the foam roller to spread it around. That was much easier than trying to hold a paint tray while also trying not to fall off the roof. 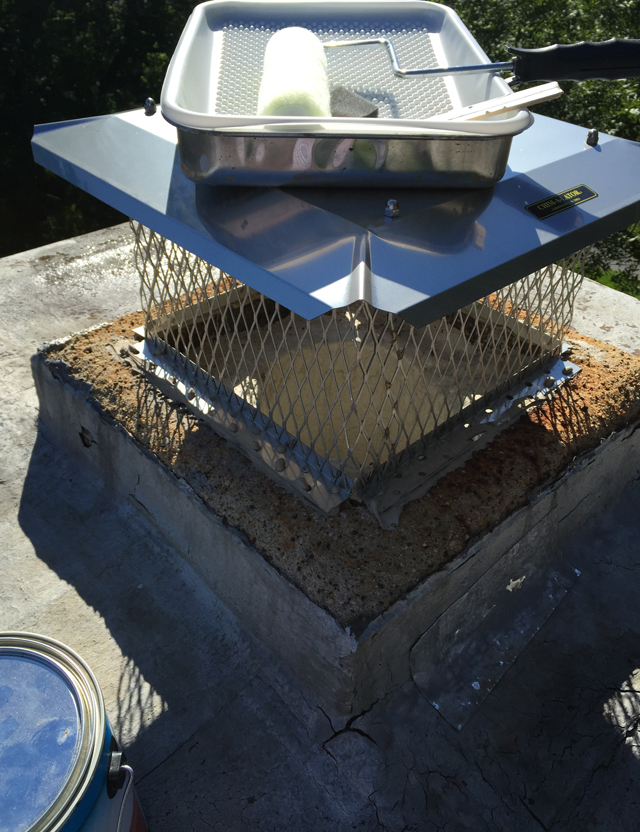 around the base of the chimney. The sealant is the consistency of model glue (it smelled like it too!) so I used a big foam brush to glob the entire can of it where the chimney meets the roof. I’m hoping that this will cover our bases should the leak be coming from the seam around the chimney. 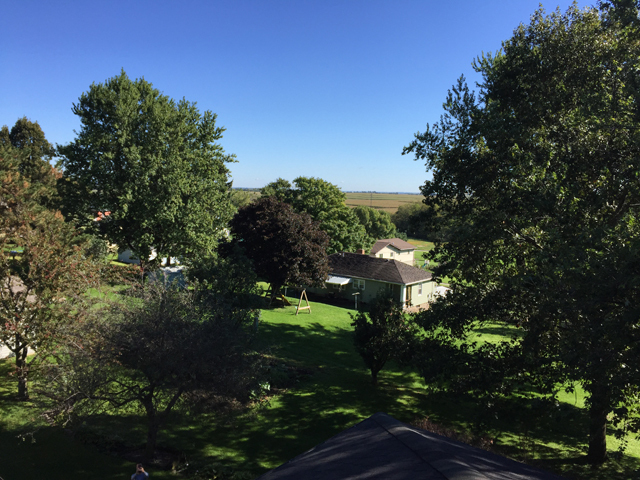 And, of course, while I was on the roof I had to snap a photo of the view. The trees are still quite full of leaves and that hampered the visibility a bit. But if it weren’t for the fact that the roof is so dangerously high, I’d want to get up on top of it more often! It’s from up here that you can really appreciate the rolling landscape and the fact that our little town is surrounded by farm fields on all sides.

Here’s hoping this fixed the leak. I’d like to not have to climb back up on the roof any time soon.

Preserving Packaging: How I Made These Vintage Hooks Functional While Restoring Their Charm