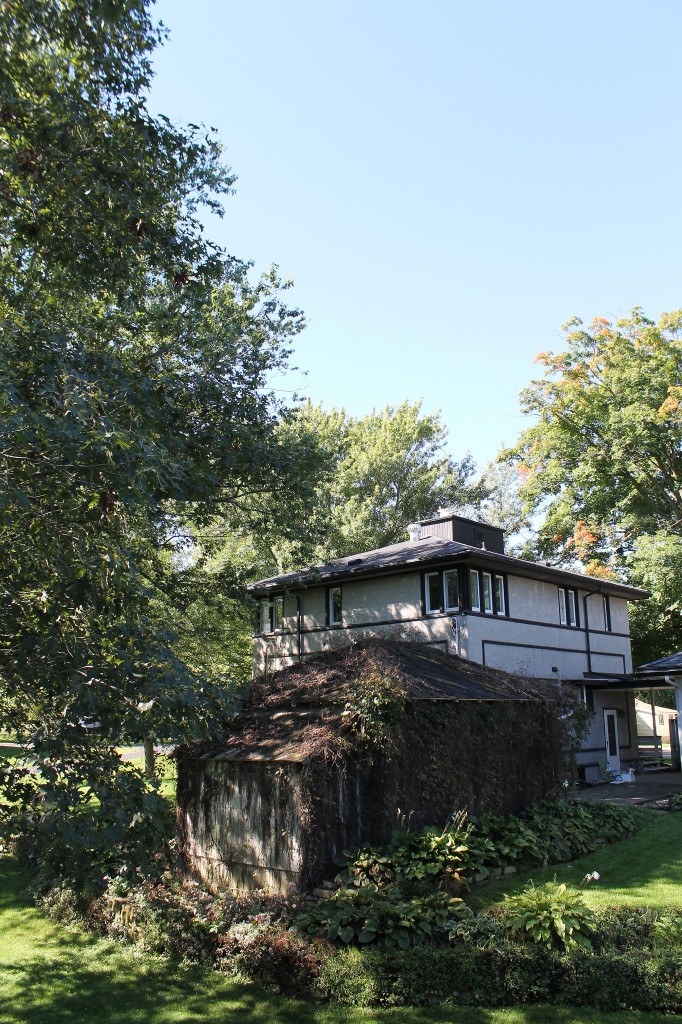 Today is a very special anniversary for the house. On this day ninety-eight years ago, Delbert Meier, along with his wife Grace, and daughters Esther and Martha, finally took residence in their American System Built Home. They had sold their house on Main Street earlier that year and were living temporarily in the apartment above Delbert’s office in the Monona Bank Building while this house was being built.

I imagine that day ninety-eight years ago was kind of like the one we’re having today. It was sunny but brisk and the trees were stripped of their leaves which were fluttering around in cyclones. Del and Grace might have walked up the sidewalk and paused on the porch before they opened the front door. They had ordered this house from a catalog, seen the supplies arrive (likely by train) and then waited as workmen had pieced it together. Today, standing on the front porch, they were finally about to walk into their very own Frank Lloyd Wright-designed house.

I wonder if Del was more excited than Grace. I know that when it comes to The Mister and me, we don’t always have the same level of enthusiasm about things. Do you think it was that way for Delbert and Grace Meier? Maybe she kind of rolled her eyes as he gave a little speech about how they were going to put Monona on the map with their Frank Lloyd Wright designed house. Delbert was mayor just a few years after moving into the house so he was certainly a civic booster. Maybe he had seen Wright’s designs in Mason City and came back convinced that they needed once of Mr. Wright’s modern homes.

But then again perhaps Delbert and Grace were equally enthusiastic about their new home. Grace could have been just as intrigued by Wright’s pre-fab homes as Delbert. Maybe it was Grace who came back from a trip to Mason City all fired up about the architect’s designs. Looking at the plans maybe she recognized that the corner windows would create bright and airy rooms and the sunporch would be perfect for summer nights and afternoon teas.

Either way, the Meiers went on to occupy this house for 40+ years, the longest they occupied any home in their lives. They finished raising their daughters here. Delbert was a fixture in town, first at the bank and then in his own law practice. Grace, an educated woman, devoted her time to gardening and, I imagine, other home projects.

In fairy tale parlance, they lived happily ever after.

Happy anniversary, Delbert and Grace. Thank you for bringing this house into our lives.