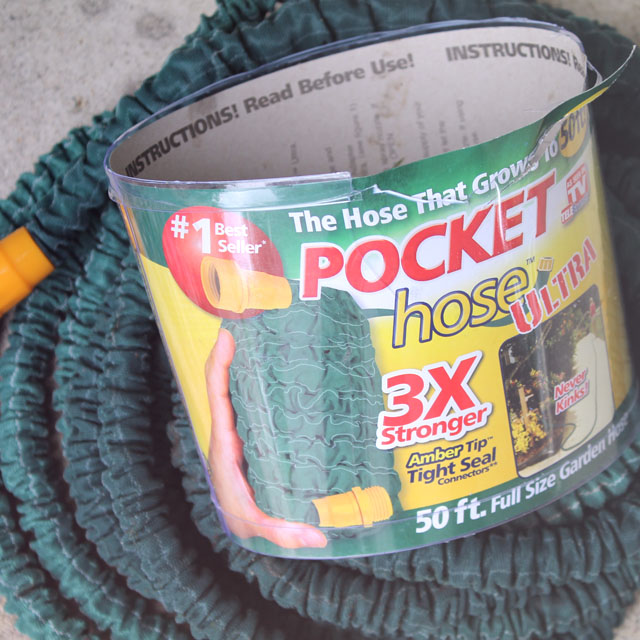 I tittered at the name splashed across the package. “Pocket Hose. The House That Grows.

” My inner thirteen-year-old boy found the sexual innuendo absolutely hilarious. I snapped a photo and put it, along with a witty caption, on Instagram months ago. Beyond the seemingly obscene name, does the expanding Pocket Hose actually work? Now that we have a house with a lawn and garden, I decided to find out!

When I needed a water hose for the Dream House, I bought one of the cheapest I could find. It was last minute and I couldn’t see paying an extra $20 for the house that said it wouldn’t kink. Let me tell you, folks. You CANNOT skimp on a water hose. The cheap ones kink at the bat of an eye. You’ll spend more time trying to keep the hose from kinking and cutting off the water supply than you will actually using the hose. I know this from experience now. Learn from my mistakes.

Finally fed up with my cheap, kinky hose (wait, that sounds vulgar) I broke down and bought the Pocket Hose at a big box store. It’s easy to store, they promise. It expands and contracts and will be the hose of your dreams, they claim.

You know what? They’re right!

Out of the plastic packaging, the hose is a limp, fabric covered noodle. It connects easily to the faucet via a plastic connector. (I am a little worried that the plastic piece won’t wear well.) Turn the water on and the hose quickly expands. The first time I tried the hose, I called over to The Mister. “It’s like one of those fireworks snakes!” I exclaimed. “You’ve gotta see this!” We turned the water on and off about half a dozen times, marveling at the hose’s expansion and contraction abilities.

We’ve had the hose for about two weeks now. My favorite thing about it is that it honestly does not kink … ever. I can disconnect it from the faucet, half ass dump it into a pile in the garage and when I need to use it again, it magically uncoils, kink-free.

One major advantage of this hose’s anti-kink design is that it’s terrifically portable. While a standard hose requires a reel or some other housing to keep it conveniently located next to the water faucet, the Pocket Hose can be disconnected and stored in the garage. When I need it again, no matter how sloppily I put it away, the hose is never a kinked mess.

I bought a reel for the cheap plastic hose I bought and even then it still kinks … on the reel!

I’m interested to see how well this hose ages. I am worried about the plastic connector stripping or cracking. The reviews for the hose on Amazon are pretty bad. Lots of folks have complained that the hose bursts after a number of uses. Then again, some of these reviewers also admit to storing the house outside. The instructions with the house advise to store the hose indoors for a longer life.

Given the hose’s ease of use and relatively low price (I think I paid $20 for it), I’m willing to take the risk that it might only last through the season. It’s better than cursing at the old hose as I struggle to keep it from kinking!

A Sneak Peek at the Dream House’s Garden