The Great Compact Car Search of 2014 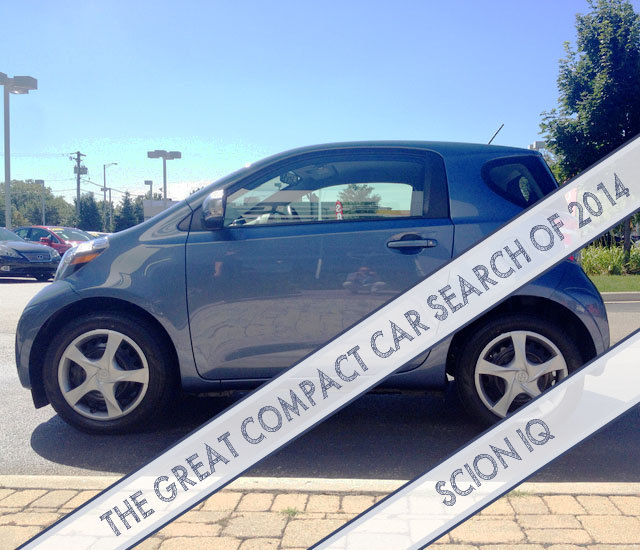 We’re in the market for a new car and we’re taking you along with us! It’s time to retire our 2005 Honda Element after 170,000 dependable miles. We’re going to keep the Element for hauling but it’s time to take it out of daily use. Since we’ll still have the Element for cargo, we want to replace it with a compact car. Follow along as we go on the great compact car search of 2014. First up…

We’re the kind of guys who were thrilled when the Smart Car arrived in the US. Those cute little two-seaters had us swooning on a trip to Europe back in 2001 and we contemplated getting one when they landed stateside. The Smart Car’s terrible service record and bad handling were enough to keep us from pulling the trigger. (Although it didn’t stop us from buying a Mini Cooper, a car that came with its own set of problems.)

The Scion IQ is in the same league as the Smart Car. At just 10 feet long, the IQ looks more like a toy than a car. (The Prius C, by comparison, is 13 feet long.) While there is passenger room in the back seat, it’s very limited. The passenger would need to slide the seat forward to allow enough leg room for a passenger in the back. And just forget about having a passenger behind the driver.

The car lacks a spare tire but it does include a tire patch. There’s also no glove box on the passenger side, which is why there’s room for the passenger to slide the seat forward to allow room for a back seat rider. There are cup holders between the driver and passenger seat as well as pockets in each of the two doors. The gas tank will hold 8.5 gallons, with mileage estimated at 37 MPG combined.

Temperature control dials are located on the center console. The auxiliary/USB port is on the console next to the gear shift. This seems like a more convenient location for the USB port than on the dashboard. Speedometer, fuel gauge, temperature and fuel economy are all located on the dash, directly in front of the driver. There’s also an “eco” indicator to help the driver eek out the best fuel economy. 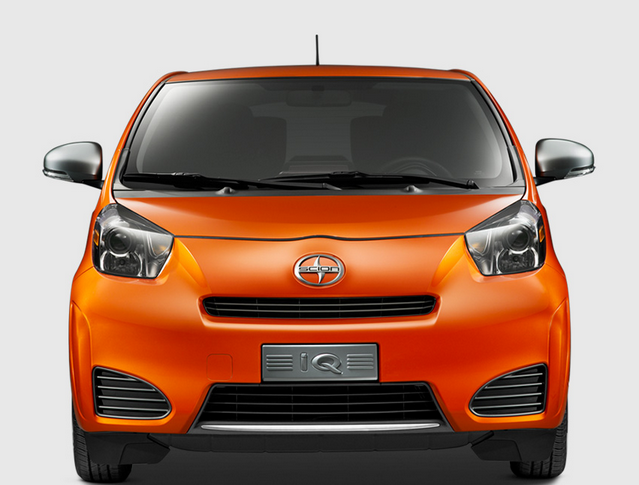 For a little car with a little engine, the IQ is pretty zippy. However, cabin noise from acceleration is a little loud. That’s probably no surprise since you’re basically sitting on top of the engine. The IQ accelerated respectably to merge onto the expressway. I have read, however, that the car can be sluggish on steep hills. Handling was pretty smooth and, surprisingly, the car absorbs bumps and pots holes pretty effectively. You can feel every movement of the steering wheel, however. Even the slightest jerk of the wheel will send the car into the next lane. Again, that’s not a surprise given the car’s compact length between front and rear tires.

While we’re in love with the car’s utterly adorable appearance, there are a few things that are keeping us from seriously considering buying it. First of all, there’s that lack of spare tire. The Mini Cooper we owned back in the early 2000’s didn’t have a spare and that became a headache really quickly. There’s nothing like getting a flat and then not being able to do anything about it until a tow truck arrives.

We also spend a lot of time in the car and, at the risk of sounding like a suburban mom, there’s just not enough stowage space in the car. Without a glove box, and with only door pockets and a center console, I suspect we would constantly need to jostle around our belongings to make them fit.

Reviews I’ve read have indicated that the car gets thrown around in windy conditions on the highway and that passing semi truck can practically send the IQ off the road. Considering the fact that we’re commuting between the city and the small town house fairly frequently, this is another stopper for us.

Verdict: Cute car but not for us. If we were looking for a city car only and didn’t plan to take trips on the highway, I think the IQ would be perfect for us. It must parallel park like a dream! Unfortunately for our purposes, the IQ isn’t very sensible.

MORE INFORMATION ON THE SCION IQ FROM AROUND THE WEB: