The Mystery of the Smokey Stove is Solved!
How a Blocked Chimney Almost Killed Us 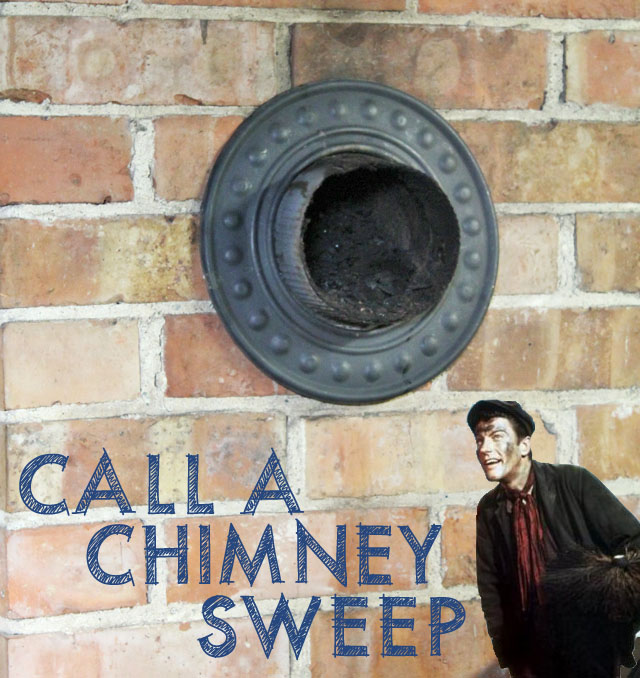 If the NSA had been documenting the goings on at the Dream House over Thanksgiving weekend, they would have witnessed Mr. and Mr. Blandings wildly flailing their arms and gasping for air as the house filled with smoke. Our first attempts at using the wood burning stove in the basement quickly devolved into a comedy of errors. We’d light the fire, the basement would start to fill with smoke and then we’d panic. We’d run upstairs and find that the first floor was also filling with smoke. So we would throw open the windows and let the arctic winter air fill the house and force out the smoke. We repeated this scene three times over the weekend before we finally decided that we’d better call in the professionals.

As it turns out, we could have saved ourselves a couple of near death experiences had we called in a chimney sweep to begin with. When we had a chimney sweep come to the Dream House earlier this week, I explained our situation with the stove and also indicated that we’d like to see if the fireplace in the living room is in working order. Although he wasn’t able to give us an update on the fireplace – it was too snowy for him to get up on the roof to properly inspect the chimney – he was able to solve the mystery of the smokey stove. And he did it within five minutes of assessing the situation.

And we’re in business! We’ve built multiple fires in the stove and it works like a charm. The fires start easily, there’s no smoke in the house and the stove warms up the basement within an hour or so. In other words, that was the best $200 we’ve ever spent on a chimney sweep!

The chimney sweep promised that he would come back out as soon as it’s safe to climb onto the roof to inspect the fireplace. Until then, we’ll have to be content with fires in the wood burning stove in the basement. Release the inner pyromaniac!

PS – I’m sad to report that the chimney sweep neither looked nor sounded like Bert from Mary Poppins! Not a single “Chim Chim Cheree” was uttered!

5 Reasons to Dry Your Laundry on a Clothesline