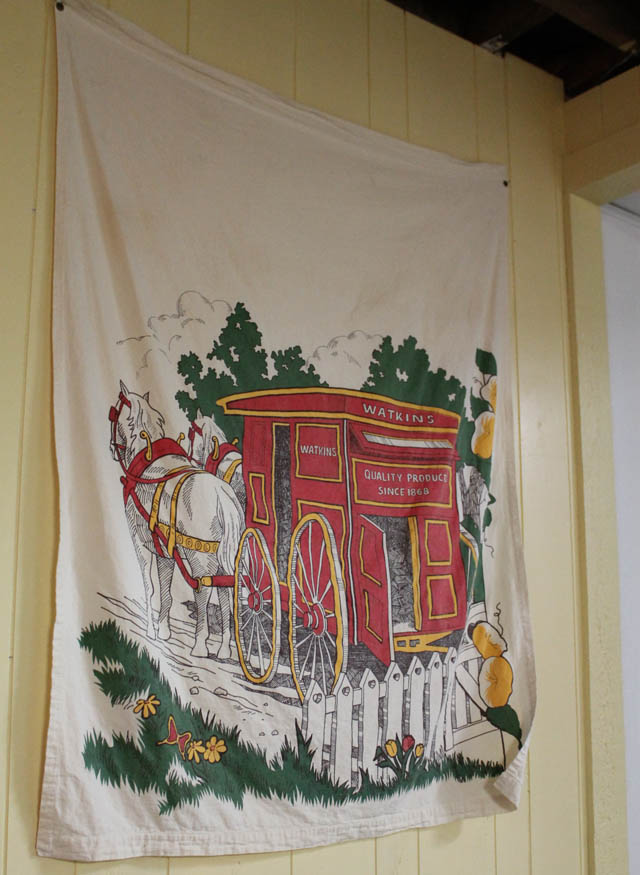 Food has played an important role in my adult life. My first jobs were in the food service industry, as a short order cook and later in a tiny sandwich shop near the university I attended. When I met my Mr. Blandings I wooed him with home cooked meals (proving that the way to a man’s heart is indeed through his gizzard). After we got married, my love of food and cooking increased as we began entertaining as a couple. I like nothing better than preparing a hot and hearty meal for friends and loved ones. So it really seems fitting that the town’s grocer used to live in the Dream House.

I was standing in the checkout line at the small town grocery store when it occurred to me that the name on the front of the store is the same as one of the former owners of our house.

“There were Wilke’s who used to own the house that we bought,” I said to the lady scanning my groceries. “I wonder if it’s the same Wilkes.”

“Becky would know,” she said. And then she picked up a phone and beckoned Becky over the loudspeaker.

“That was my husband’s uncle,” Becky informed me. “He used to own the grocery store that’s in town and he also lived in that house.”

As the story goes, Mr. Wilke owned and operated the old grocery store in the center of town for a number of years. He was a meatc utter by trade and his family was entrenched in the grocery and food industry. He left the grocery business for awhile to follow a religious calling but he later came back to town and built the brand new grocery store that’s still in operation, although under new ownership.

Thinking back to the original documents we received with the house, this all makes sense. The house was built by Mr. and Mrs. Meier in 1917. They lived in the house until their deaths in the late 1950’s (Mr. Meier) and the early 1960’s (Mrs. Meier). From what know, the Wilkes bought the house from the Meiers and lived in it for some time, probably into the mid-1970’s.  It was probably during this time that the Wilkes built the new grocery store that serves the town to this day.

Since moving into the Dream House, I’ve tried to do the bulk of my food shopping at the small town grocery stores in the area. It might mean paying a little more at the till, but I’m a big proponent of independent businesses. Now, knowing that the grocery business played a part in the Dream House’s history, I’m even more likely eschew the big chain stores and support the small mom and pop shops.

Later in the day yesterday, I was browsing a thrift store and came across a fabric banner advertising “Watkins – Quality Products Since 1868.” Despite the fact that I had no idea what I would do with it, the banner was only one dollar so I purchased it on an impulse and brought it back to the house. As I was hanging the banner up to dry after washing it, it occurred to me that it’s probably an advertisement for a food company. The horses pulling the red and yellow wagon is the big tip off that Watkins might have been a grocer or somehow related to the food industry. 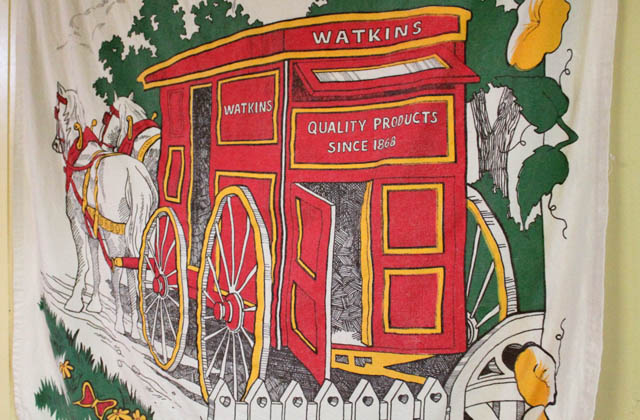 A quick internet search concluded that I’m half right. The banner is probably an ad for J.R. Watkins. Since the company is based in Winona, Minnesota, not all that far from the Dream House, I think it’s likely that the banner is indeed an advertisement for the company. And while they’re not exactly a food company, Watkins is related to home and groceries. You may know J.R. Watkins for their dish soap or laundry detergent but the company also offers pure vanilla extract and other baking goods.

Thinking back to my conversation in the grocery store earlier in the day, the banner seems like another wonderful food-related coincidence. We’ve been talking lately about trying to coordinate dinner party events at the Dream House as a way to give tours of the space while also providing an outlet for my creative cooking skills. It seems that the universe might very well be nudging us in that direction!