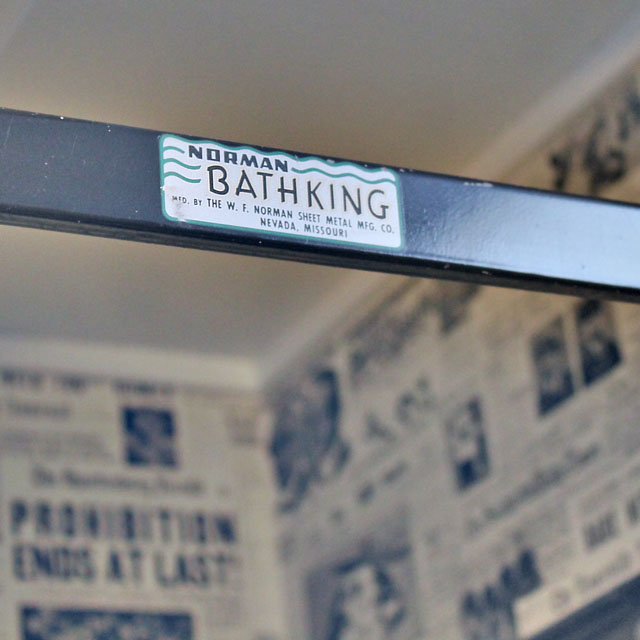 Rounding the corner in the tiny little bathroom in the basement, I literally squealed in glee the first first time I saw the shower. As I explained to anyone who would listen in the lead-up to closing on the house, I imagine Rita Hayworth behind the swinging doors in the all-metal shower insert, her red hair lathered up and a look of shock on her face. I don’t know why the shower conjures images of Ms. Hayworth other than the fact that it has a certain post-WWII charm to it. And, actually, I’m not far off in dating the shower as a late-1940’s design.

I haven’t been able to find much information on our vintage shower, but here’s what I’ve learned so far: 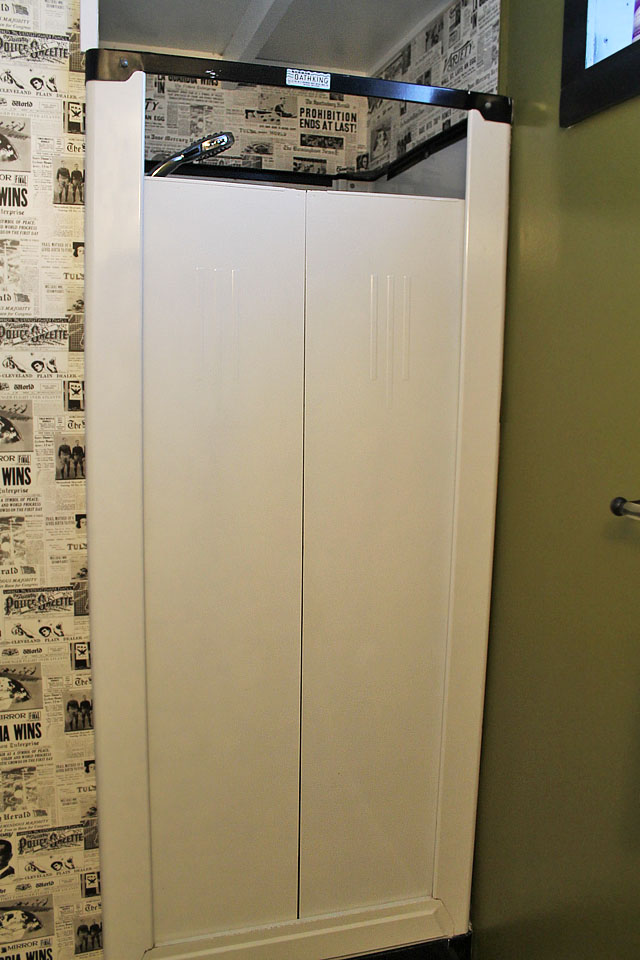 The metal tag on the frame of the shower reads, “NORMAN BATHKING – MFD BY THE W.F. NORMAN SHEET METAL MFG COMPANY, NEVADA, MISSOURI.” Started in 1898, W.F. Norman was the leading manufacturer of the decorative tin ceiling tiles at the turn of the 20th century. By the late 1930’s, however, tin ceilings had gone out of fashion and, struggling to survive, W.F. Norman started branching out into sheet metal for other uses. In addition to making temporary grave markers and metal skylight frames, the company started making shower stalls. 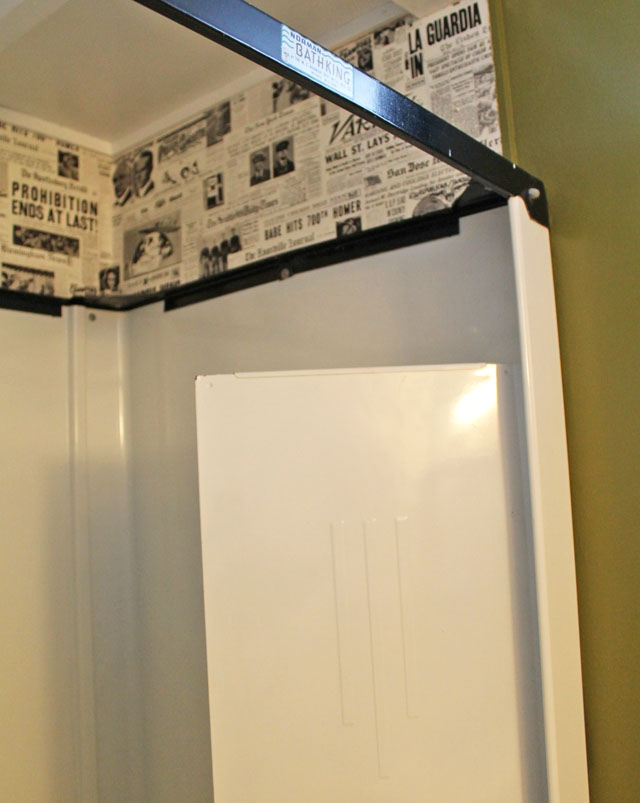 I imagine sheet metal showers were quite common in the time before fiberglass became the norm, but it looks like W.F. Norman found a way to improve on the design. In my search for information on the shower stalls, I came across a patent filed in 1946. The patent focuses largely on the doors to the shower insert, which, as patents states, are an improvement on existing designs. The patent filing, which is held by W F Norman Sheet Metal Mfg Co, and credits Joe P. Harner as the inventor, says:

“My invention relates to novel and useful improvements in a shower bath cabinet, and more specifically consists in an improved door and hinge arrangement therefor. The principal object of my invention is to provide a shower bath cabinet having a door hinge which will not freeze or bind under the conditions to which it is exposed.” 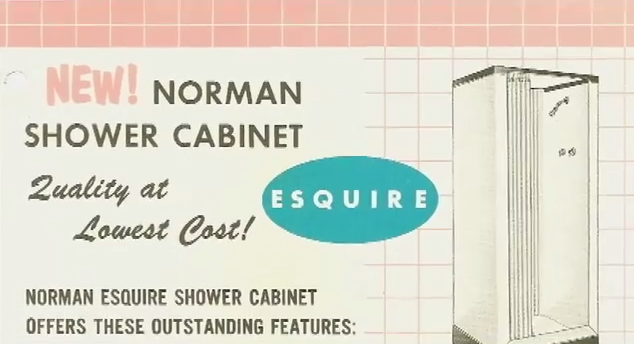 W.F. Norman was owned by the Norman family until the 1970’s, when the company was purchased by Robert Quitno. Still located in their original factory in Nevada, Missouri, the company is run the Quitno family to this day. By the time the Quitnos took over the business in 1978, tin ceilings were back in vogue, especially for vintage rehabbers. According to this YouTube video, it was around that time that W.F. Norman stopped making shower stalls and returned to making their original product, tin ceilings.

It’s hard to know how long this shower stall has been living in the basement of the Dream House. I doubt that it dates as far back as the 1950’s but it’s totally within reality that it was installed sometime in the 1960’s or ’70’s. The fact that the stall is still in great condition and that the doors still work is a testament to the shower’s quality.

When we commented on our love of the metal shower to one of the sellers she said, “Oh, I’ve never used it. My husband and father would use it sometimes but I never came down here.”

There must be something in the XY chromosome that attracts us to such things because I had my first shower in the house in the Norman Bathking. I love the way the water pings off the sheet metal. I love the way the shower doors open and close like saloon doors. We love the shower so much that when we get around to rehabbing the basement bathroom, the shower stall will stay exactly where it is.

**UPDATE**
I emailed a link to this post to the folks at W.F. Norman and they kindly responded. In the email, Mark says:

“Those were great shower cabinets. Unfortunately, plastic and fiberglass put our metal ones out of business because ours were so much more expensive to make. We haven’t made any for more than 30 years now. I did find one old piece of literature on these in one of our nearly 100-year old catalog. I scanned it and attached it to this email for you.” 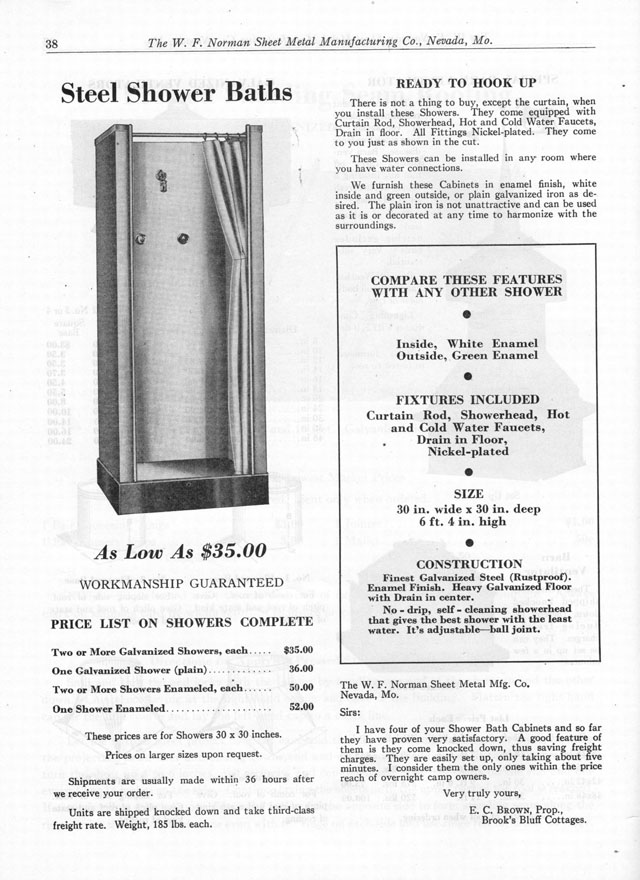 It’s a shame that plastic and fiberglass meant the end of these charming shower stalls. I’ve seen many old plastic showers in basements and they’re almost always too disgusting to use. Our Bathking, on the other hand, has aged remarkably well. Even if the shower was installed toward the end of its production, say the mid-1970’s, that would still make it almost 40 years old. As a person who also made his introduction to the world in the mid-70’s, all I can say is that I wish I was holding up as well as this shower!

Some information in this post was gathered from the artictle Tin Ceilings Have Old-time Appeal in the Orlando Sentinel.

Before & After: The Dining Room Gets Subdued Restyling