We’re In! A Quick Update from the Dream House 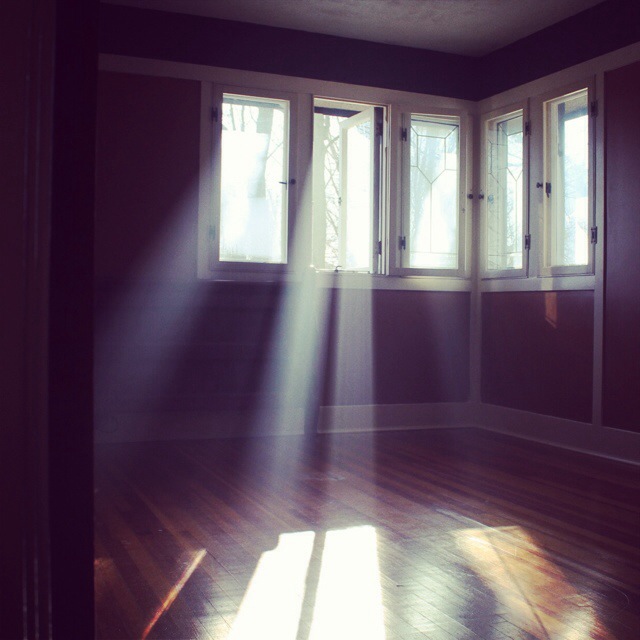 In the weeks leading up to taking possession of the dream house, we wiled away the hours planning all the things we would do once we were in. We talked about everything from paint colors to lighting as we waited to close on the house. But at the very top of the list was something neither of us could stop talking about — building a fire in the wood burning stove in the basement.

When the temperatures in the Midwest drop, we’ve often complained about not having a fireplace in our city apartment. There may be nothing more comforting on a cold day than a roaring fire. So on our first night in the house, with icy fingers from unloading the moving truck, we went straight down to the basement to build a fire in the stove.

Now, I have some experience with fireplaces and wood stoves. We’ve rented a number of houses and cabins over the years specifically for their indoor fire offerings. Whenever we do have access to a fireplace, I’m always the fire starter. I was never a Boy Scout or anything, but building a fire is something I just get. Open the damper, build a little wood pyramid, light the fire and watch it go. It’s usually a pretty straight forward endeavor. So as we started to build the fire in the house’s stove, I was confident I knew what I was doing.

As smoke started to fill the basement, we knew something wasn’t right. There’s no damper on the wood stove so we knew that wasn’t the reason smoke wasn’t being sucked up through the chimney. We flapped our arms and opened windows and hoped that once the fire got going the smoke would travel up the chimney and out of the house. As the smoke got really thick in the basement we fled upstairs to escape, only to discover that the rest of the house was filled with smoke. We hurriedly opened windows, had a good laugh about the fire folly and vowed to have the chimney swept and stove inspected before we tried again.

Fast forward to the day before Thanksgiving and we were back at it again. I made an appointment with a chimney sweep but they can’t make it out until the second week of December. Impatient, and armed with some information on wood stoves that I picked up online, we decided to give the stove another try. Once again, the house filled with smoke, the alarm went off and I’m pretty sure the cat thought that we had brought her to the house with the intention of smoking her to death. She kept circling around our legs and walking toward the back door as if to say, “You silly humans! Get the hell outside before we all die!”

We let the house air out and, once again, have vowed not to attempt a fire in the stove until the chimney sweep looks at it in two weeks. Until then we’ll have to be content with tackling all the other things on our first-week-in-the-house to-do list.

The one good thing to come of the fire follies was that I got the amazing shot at the top of this post. With the sun streaming in through the old windows, the smoke filled house looked especially photogenic. I grabbed my camera and snapped a few photos before I started waving my arms around to try to disperse the smoke.

The lesson here: always look on the bright side. Oh, and call in the professionals where fire is concerned.