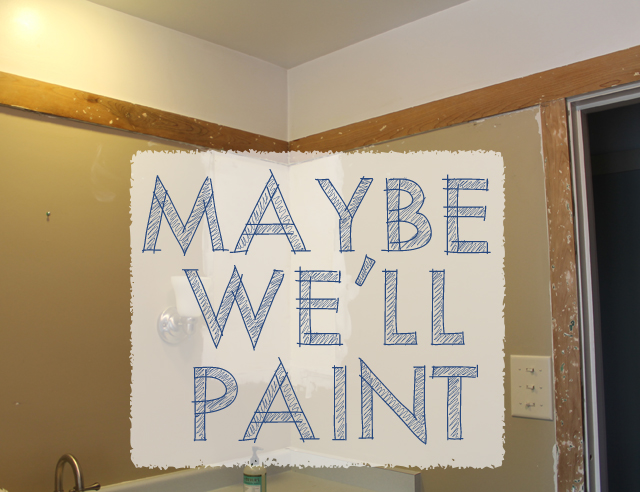 The topic of the house’s woodwork and whether it should be stripped or painted has been hotly debated for months now. The Mister and I have gone back and forth on the issue at least a dozen times. He has a been a proponent of stripping the woodwork from the very beginning. I initially wanted to keep everything painted, but after some cajoling I, too, thought the trim and window frames should be stripped.

Now, I have some experience stripping woodwork. When I was in junior high school my parents bought an old house that needed extensive remodeling. I helped my dad apply toxic chemicals to the woodwork and laboriously scraped and sanded the layers of paint away. It was stinky, messy and a royal pain in the ass. So when The Mister and I first started debating whether to strip or paint, I had that memorable adolescent experience in mind.

Another reason I was on team paint is that I like the modern look of painted woodwork. Wood trim can feel dark and dated while painted trim can make even a vintage space feel a little brighter and more modern.

The Mister cited the house’s history as the main reason to strip the woodwork. Being an American System-Built home, he reasoned, we should try to preserve as many of its original qualities as we can. Since the built-ins were pulled out of the house years ago, the only remaining original features are the windows, the woodwork and, on the outside of the house, the stucco. As we delved deeper into researching the house, and as we learned more about ASB homes and their famous architect, Frank Lloyd Wright, I started agreeing with The Mister’s reasoning. Finally, I conceded to strip the trim in the bathroom and, based on our findings, we could then decide whether to do the same elsewhere in the house.

We’ve now gotten almost all of the trim in the bathroom stripped down to the natural wood finish. Using Dumond Peel Away Paint Remover (see the post on my product tester here) on the wood did make short work of cutting through the multiple layers of paint. It also left behind lots of small blotches of paint that have not been quite as easy to remove. So, of course, the Peel Away is not the magic bullet we had hoped it would be. Removing the blotches requires another layer of Peel Away and some scraping with the plastic tool that was included in the container. While the Peel Away is far less toxic than the chemicals I used with my dad all those years ago, it’s still a messy endeavor.

Halfway through the bathroom woodwork project, I was convinced that we were doing the right thing. Yes, it would be a lot of work, but the wood itself is so beautiful that it would be a shame to keep it hidden under paint. But then my attitude started to shift again when I realized how many pieces of the trim had been replaced over the years. In the bathroom, for instance, one entire wall of baseboard has been replaced with cheap wood trim. There’s no reason to strip that replacement wood, but that means we’ll have to replace it entirely and then try to stain it to match the rest of the original woodwork. Sounds fun, right?

The thing that may have finally pushed us toward painting vs. stripping was our dinner with Peter and Becky. As we were showing the former owners around the house, they mentioned that the window trim in the living room had rotted out and been replaced. In fact, Peter had also wanted to strip the trim in the house until he discovered how much of the wood didn’t match.

We already knew that the wood around the closets in the bedrooms was not going to match but we had no idea how pervasive the trim replacement had been over the years. Hearing from Peter that we would find a lot of mismatched woodwork under the paint made us consider our plans a little more thoroughly. While it would probably be possible to stain any trim that has been replaced to match the original, it also seems like an awful lot of work. And, besides, the whole intention of stripping the woodwork was to retain some of the house’s original features. But if the woodwork isn’t original, then is it really worth the effort?

I spent some time yesterday Googling around and pinning photos of painted woodwork in an effort to find some inspiration. This mission style home with painted woodwork is a good representation of what our house might look like with crisp white trim:

Nice, right? Modern but vintage at the same time. And I like the yellowish/tan paint color that’s paired with the white woodwork.

We still haven’t completely given up on stripping the woodwork. The current plan is to go balls to the wall with the bathroom trim. I mean, we’ve come this far with it, why not finish the job? Maybe the bathroom will be the only room with stripped woodwork or maybe we’ll feel so inspired that we’ll keep going. That’s part of the fun of old house rehabs … if that’s your idea of fun.