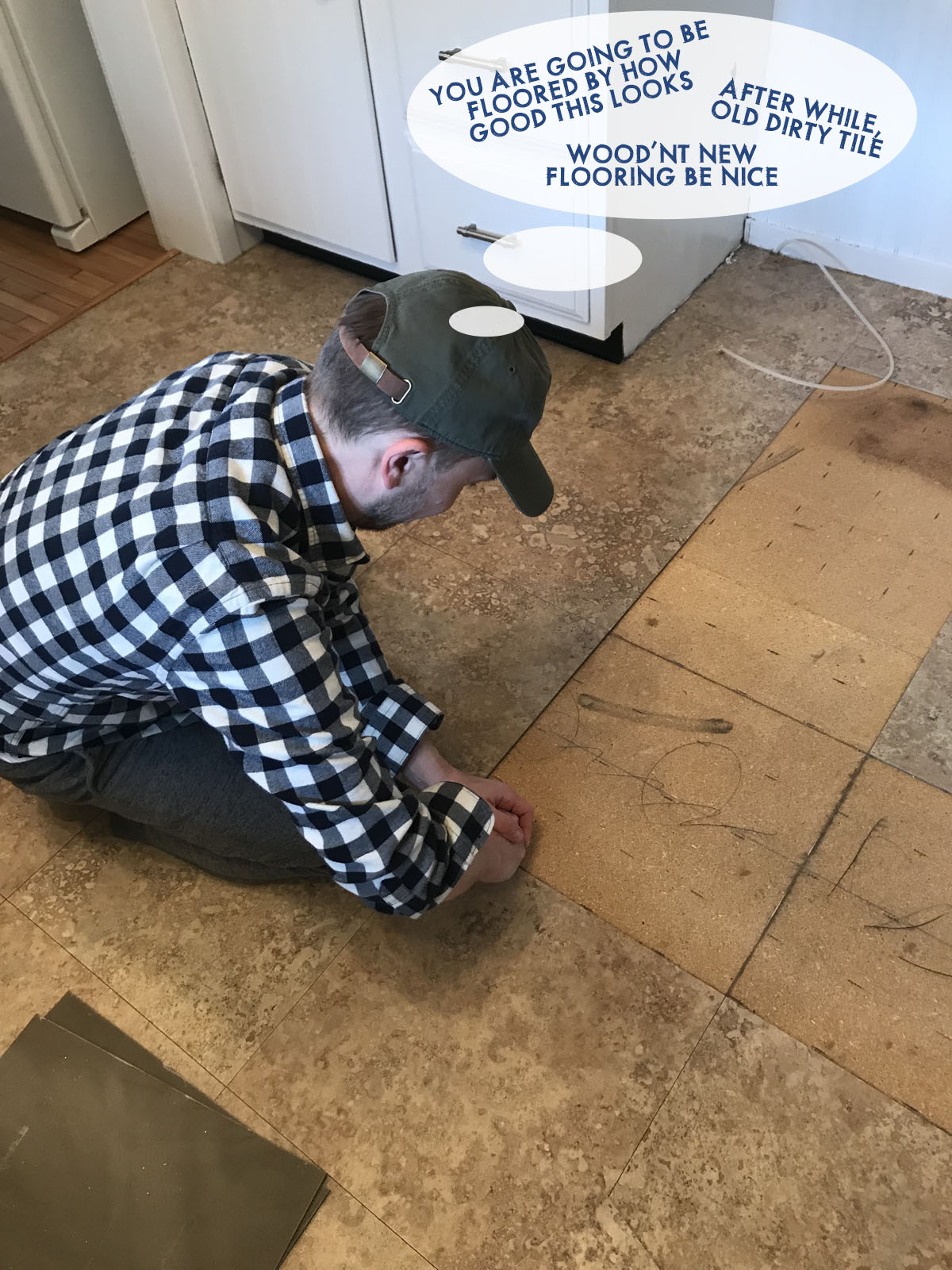 But enough about my mental quirks. You’re here for house updates, not to learn about my inner workings, right? 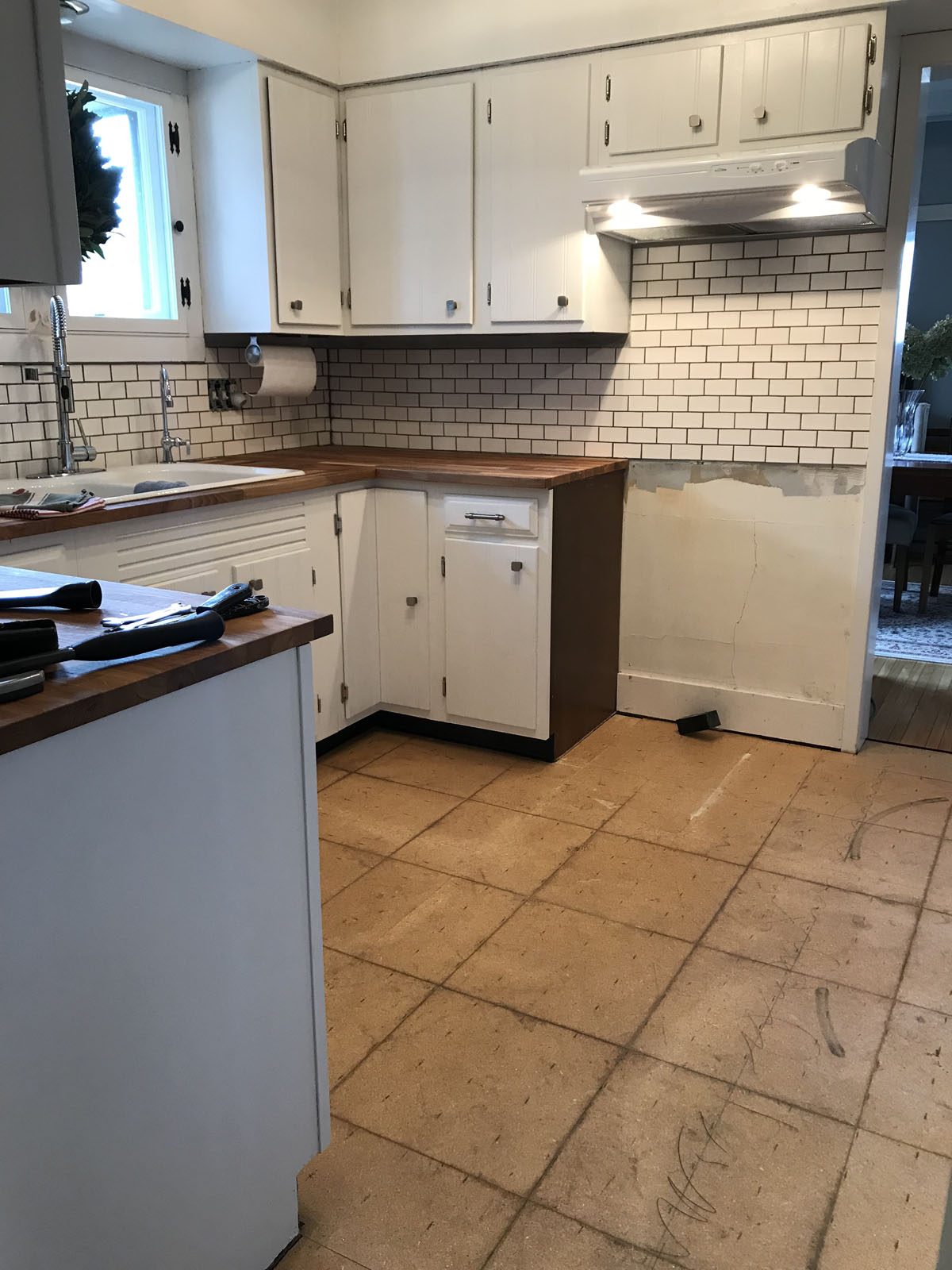 We’re slowly checking things off that kitchen to-do list that I gathered in a previous post, putting us a little closer to having one room in the house completed. Over the past week we installed new flooring, stripped the window and took care of some of the smaller details and trim work. I’ll write about the detail work later, but first let’s take a look at the flooring. 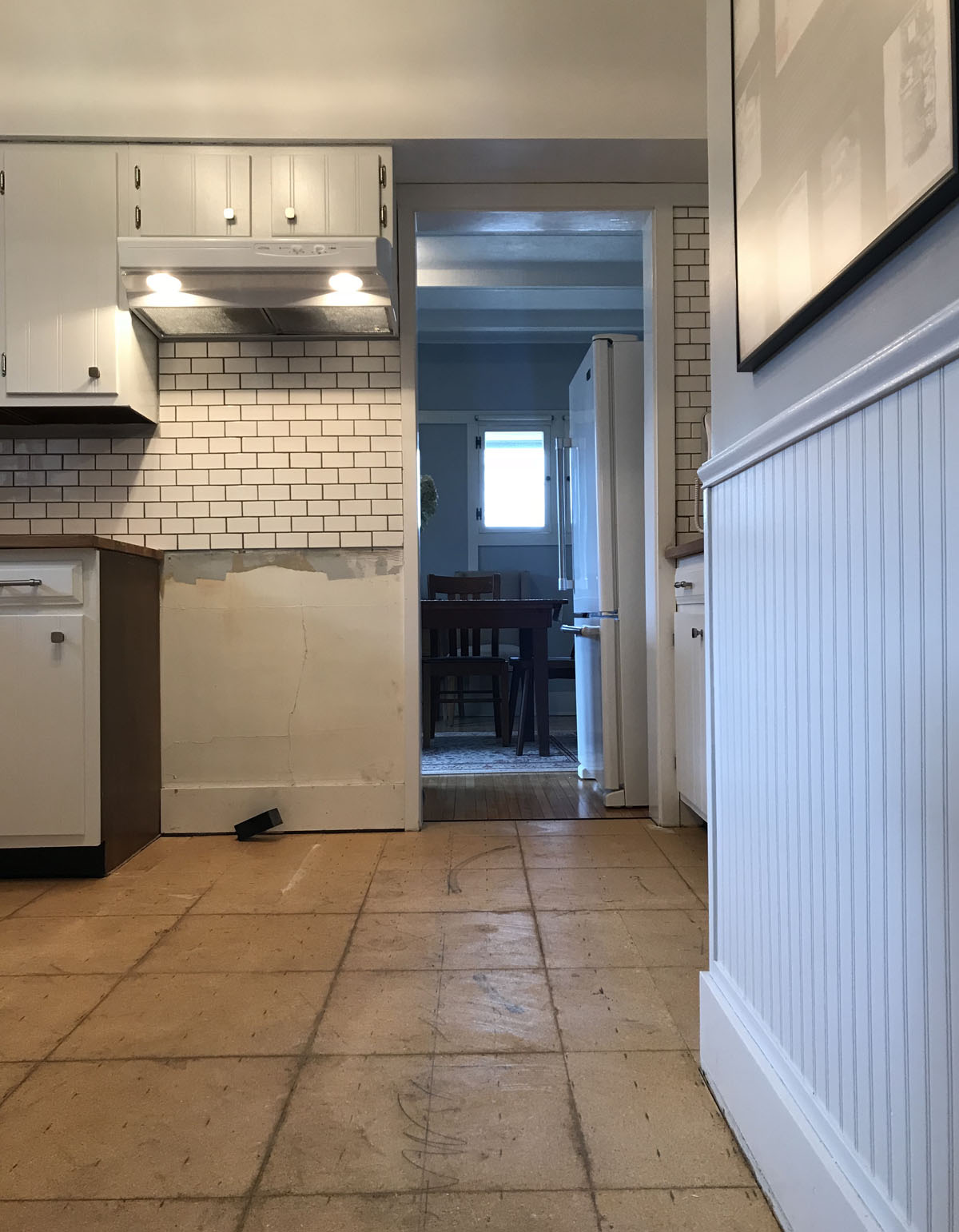 Pulling up the vinyl tile was a cinch. I used a utility knife to trace around the edges of the tile and that loosened them enough to allow me to grip them with my fingers and pull them up. Those lines that you see in the photo above – that’s dirt that had worked itself between the crevices. Yuck. So after all the vinyl tiles had been removed I vacuumed and washed the subfloor. The old flooring left some glue behind but since we’re installing laminate flooring with underlayment, we didn’t have to contend with trying to remove that sticky residue. 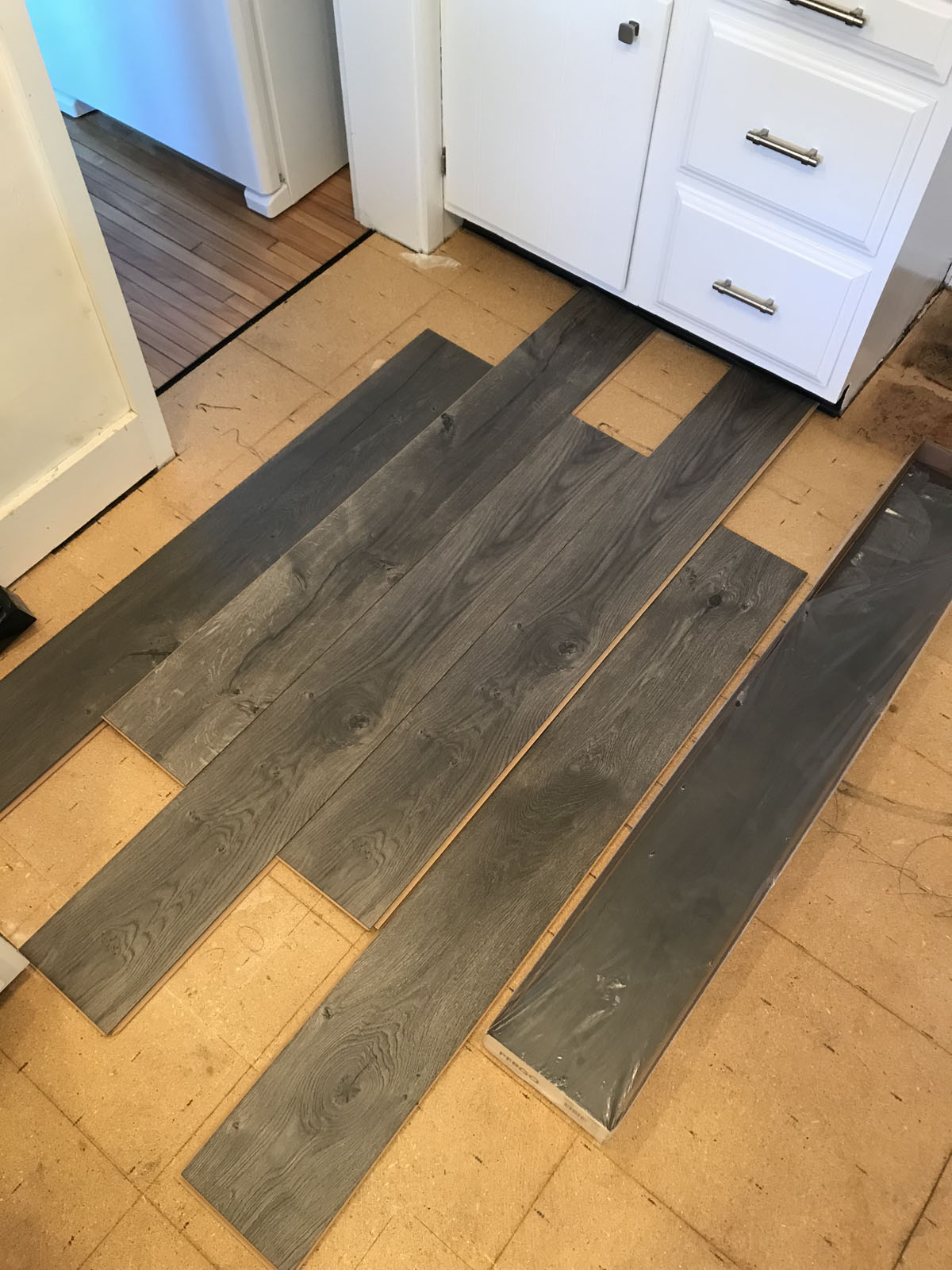 We chose Westlake Oak Laminate Flooring by Pergo to continue the farmhouse kitchen theme. I had actually thought about installing ceramic tile but once I considered how long it would take for mortar and grout to dry and for the kitchen floor to be usable, I decided to go with something that would have a quicker turnaround time. We installed laminate flooring in the basement bathroom last year so I was knew that it went down fairly quickly and easily. Whereas tile would have taken about a week from start to finish, we had the laminate flooring down and the appliances re-installed in under 48-hours. 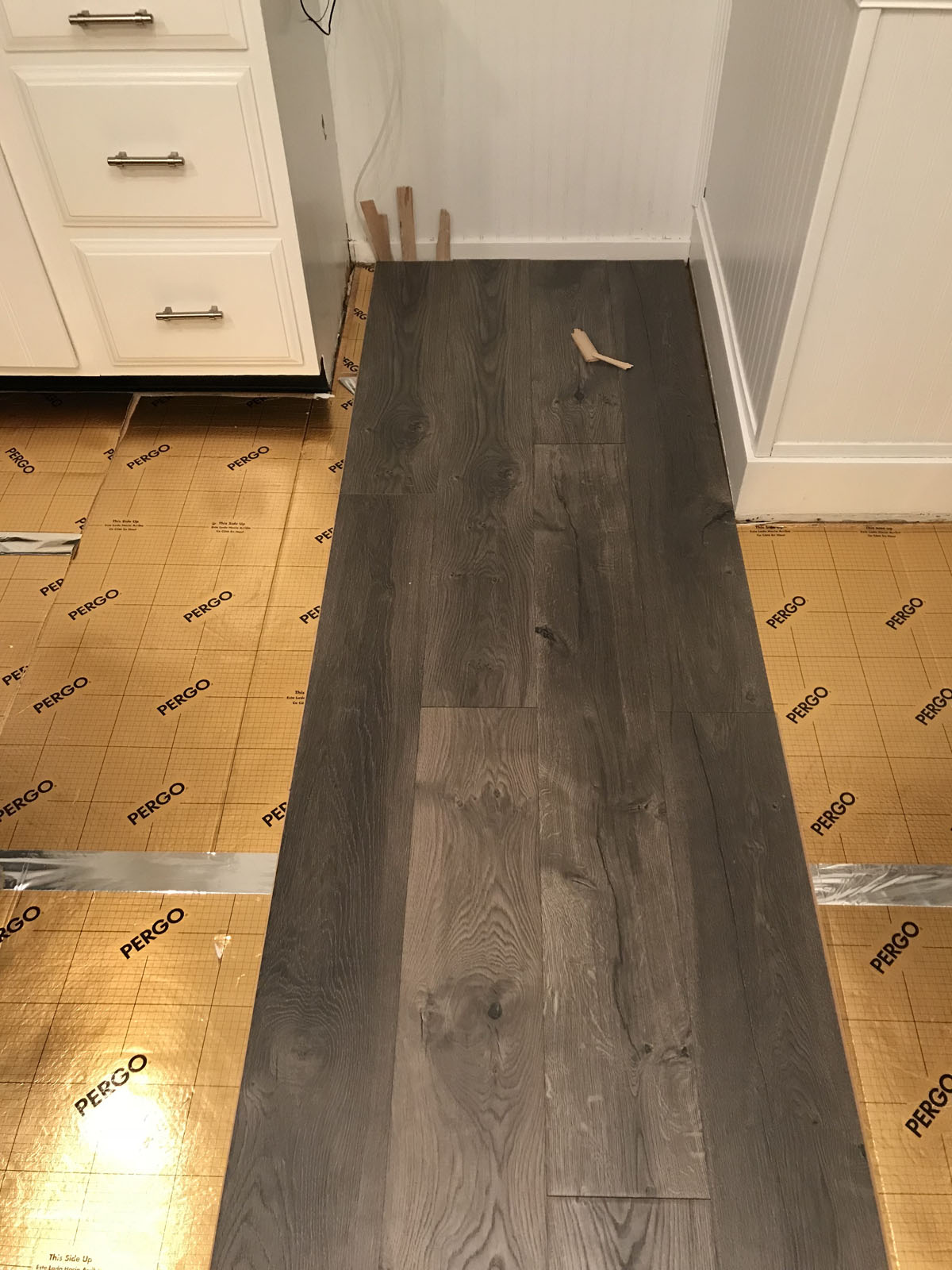 The hardest part of installation was deciding where to start. Normally with this kind of flooring, it’s easiest to start along a solid wall. But with the direction that we chose to install the laminate, there really wasn’t a solid wall available. Instead, I started in the middle of the room. Getting those first four rows down and straight was quite a task! By the time those first rows were down, I decided to quit for the day. I found myself swearing far more than usual – that’s always an indication of quittin’ time. When f-bombs start falling like it’s D-Day, you know it’s time to step away from the project for a little while. 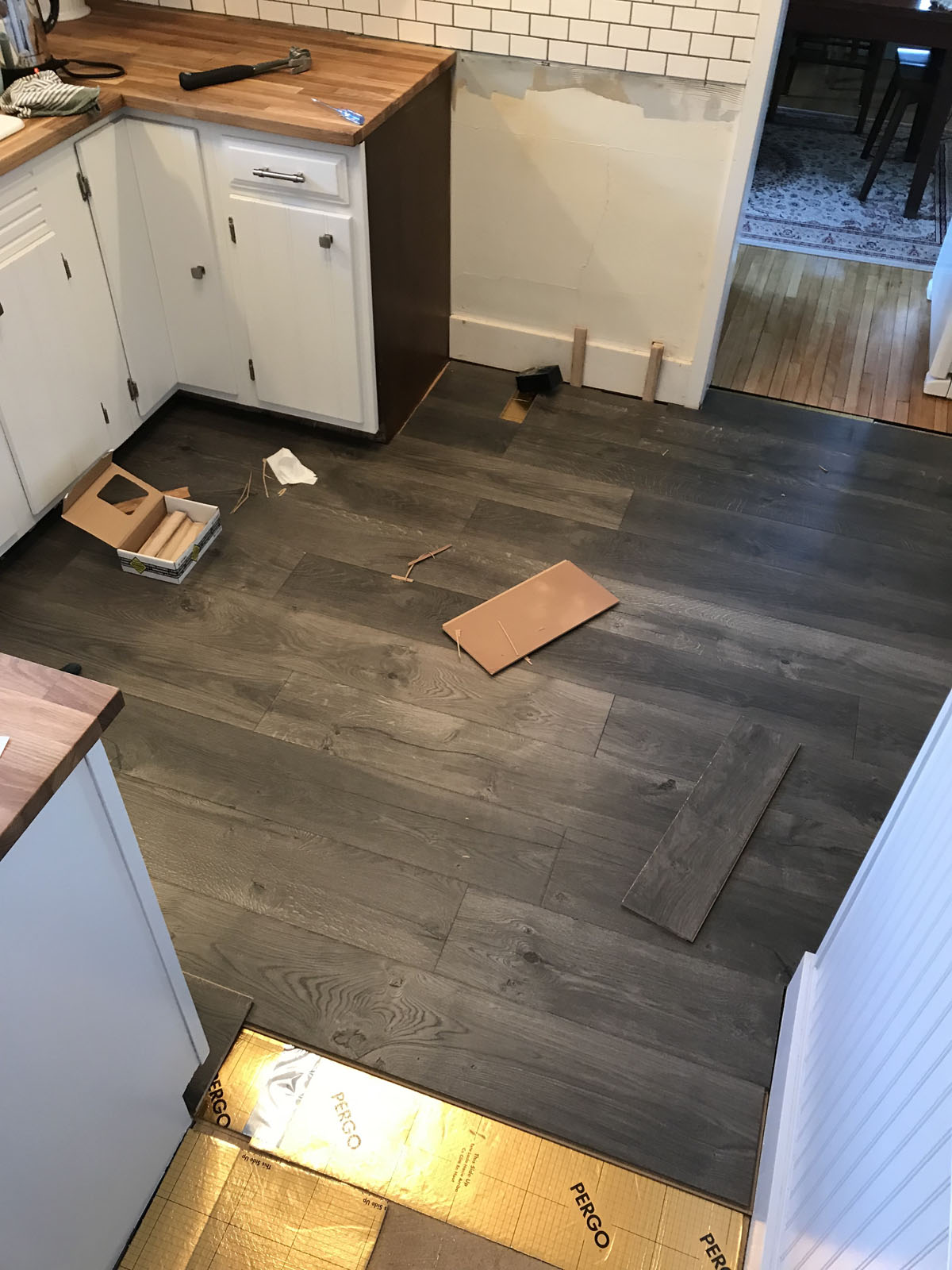 When we resumed the project the next morning, I’m happy to report, the remainder of the flooring went down rather quickly. Those first four rows really were the hardest part, everything else was cake. In a twelve hour span – from my expletive laden tirade the night before to the productive morning after – I rode a rollercoaster of DIY emotions. I went from thinking that I had made a huge mistake in buying laminate for the kitchen and an even bigger mistake taking on the project myself to feeling like the room was more gorgeous than ever and I could install flooring over the surface of the entire planet. Do you think Martha Stewart still goes through these moments of creative crisis mid-project? 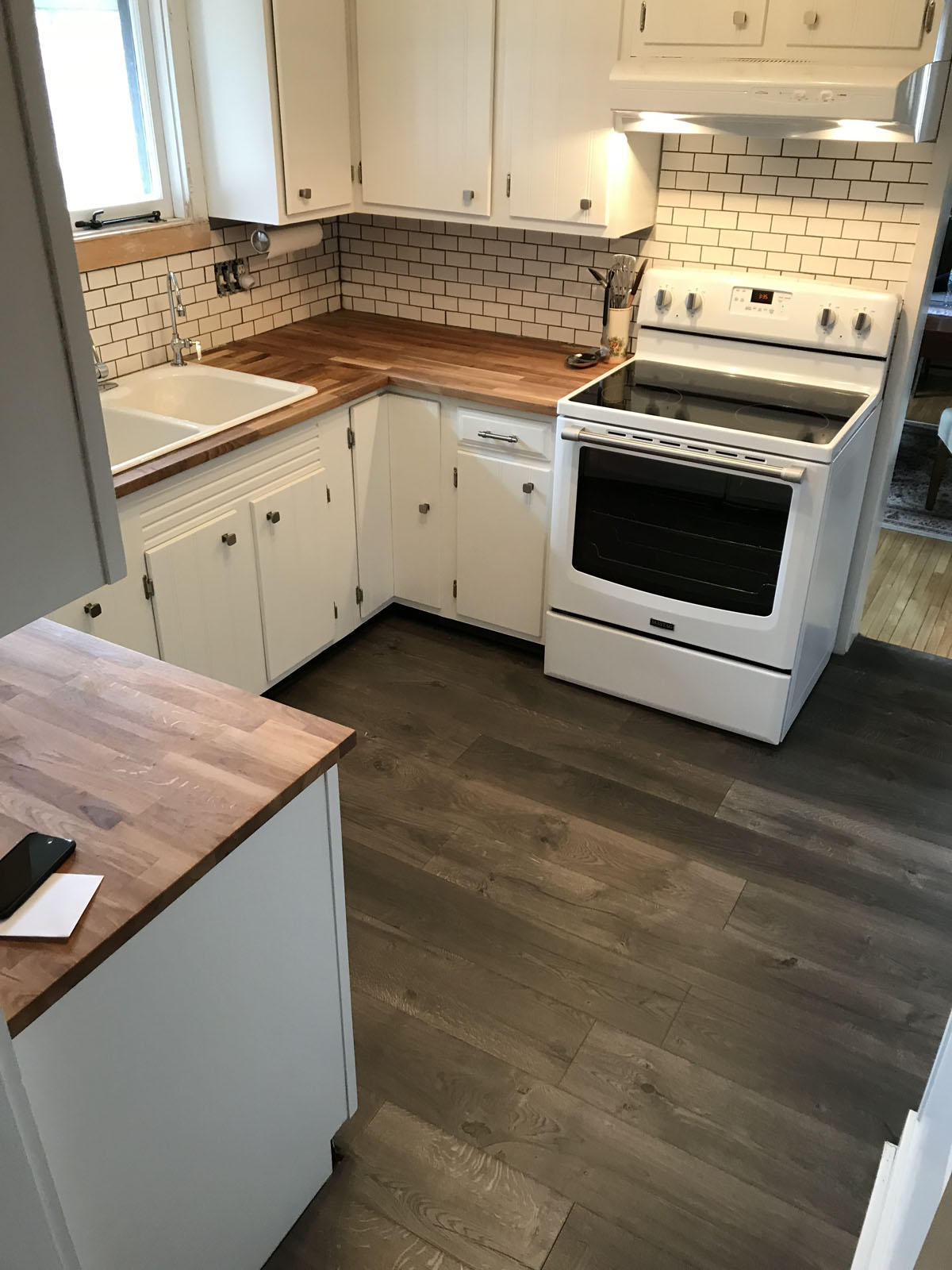 By the time half of the flooring was down, I knew that the color and finish of the wood was a perfect choice for this kitchen. The weathered gray coordinates well with the butcher block countertop and gray grout in the backsplash and it also lends itself nicely to the overall farmhouse kitchen look. And then once all the flooring was down and the appliances had been moved back into place, well, I didn’t exactly cry tears of joy but I was damned close to a blubbering mess. Fortunately this brand of Pergo is waterproof. It can withstand my salty tears and the wear and tear of being in a kitchen. 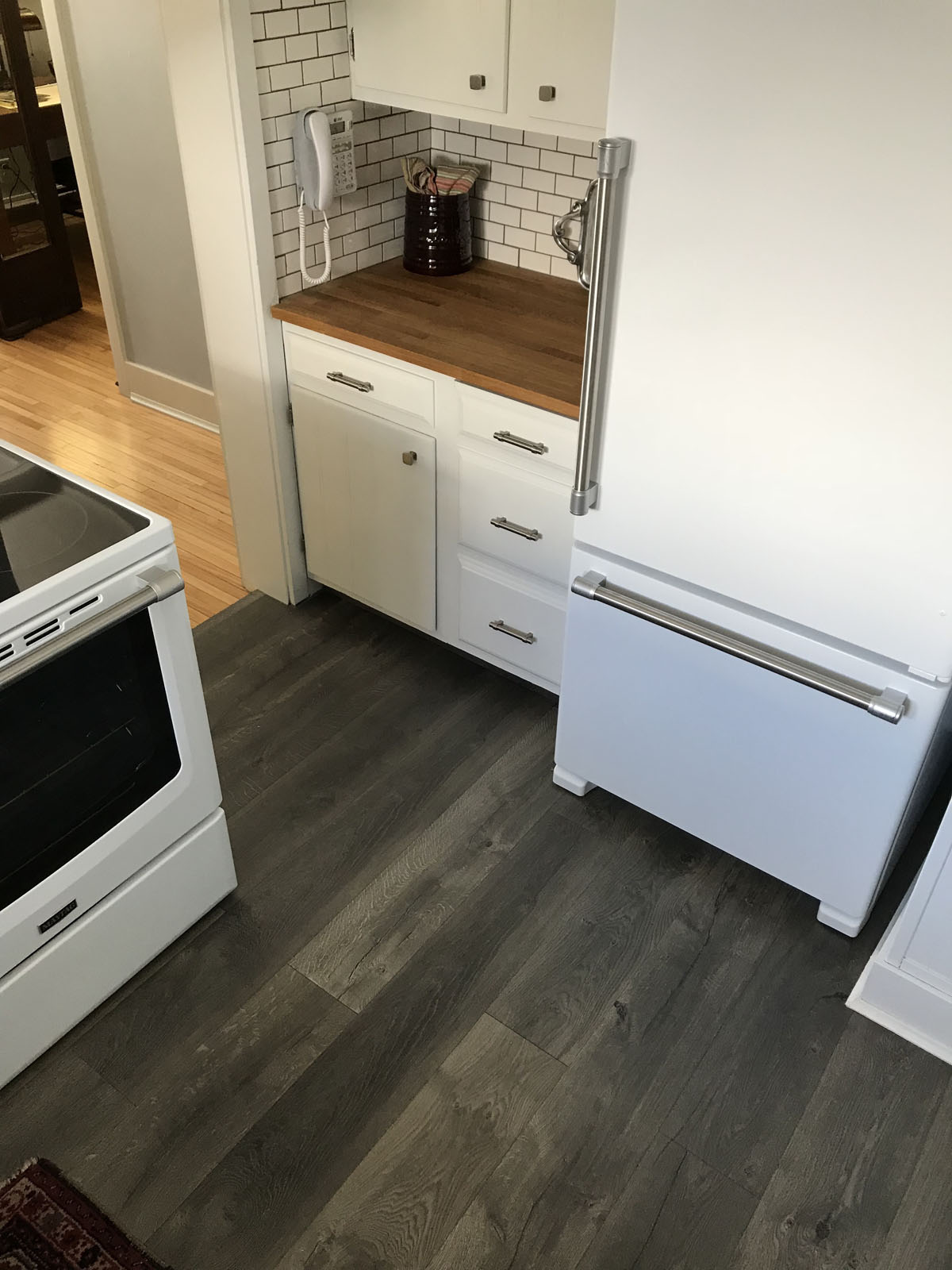 Unlike the laminate flooring that I installed in the basement, this style of Pergo has a more genuine hardwood feel underfoot. The flooring is textured and with the recommended underlayment installed, it also sounds more like genuine wood. I’m interested to see how this laminate ages in a frequently used and abused kitchen. 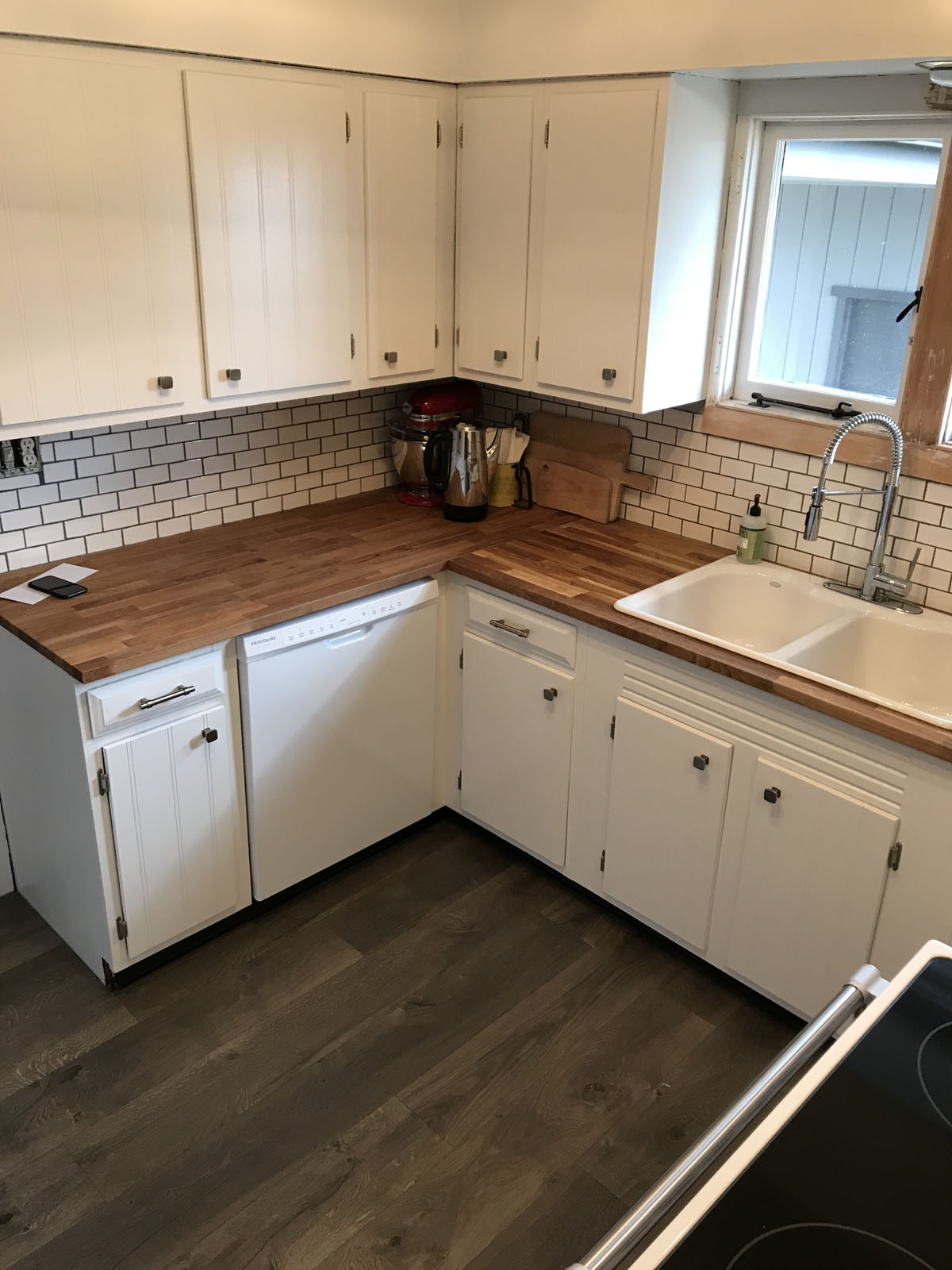 So let’s take another look at that to-do list:

With the new flooring down, there are just a few remaining items on the list. Stay tuned to see what we check off the list next.

How to Install a Tile Backsplash <br>(Good News: It’s Easier Than You Might Think!)