bathroom, before & after, DIY, renovation, thrifty 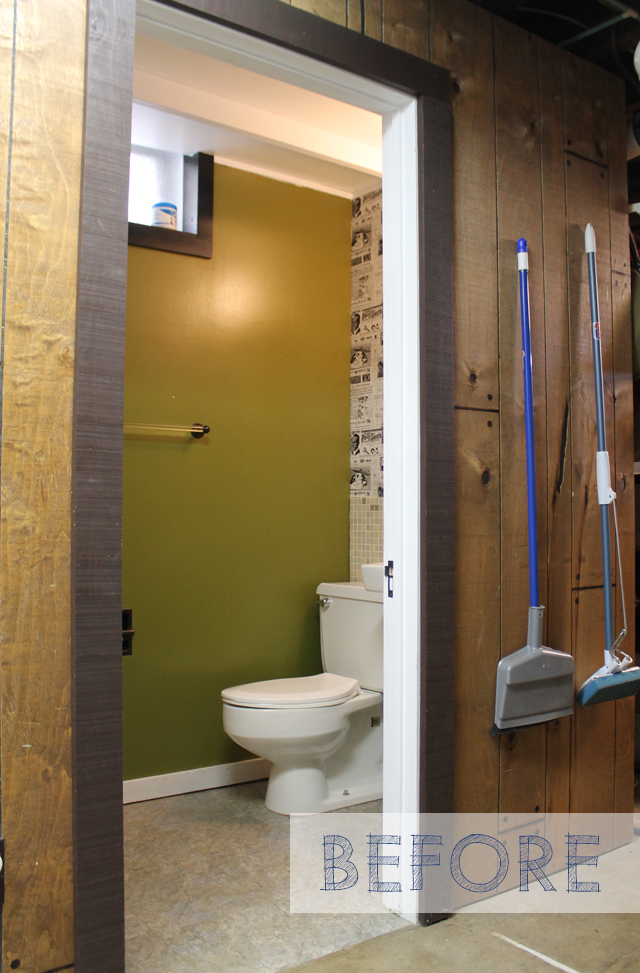 When our house was built in 1917 it was equipped with one bathroom on the second floor. Somewhere along the way – and judging by the Bathking shower I think it was post-WWII – a bathroom was added in the basement. This little bathroom has been great in a functional kind of way when we’ve had houseguests. Or even when it’s just the two of us and nature calls at the same time! Still, this little bathroom could use some refreshing. From the army green wall to the peel and stick floor, it was time to give this bathroom new life. 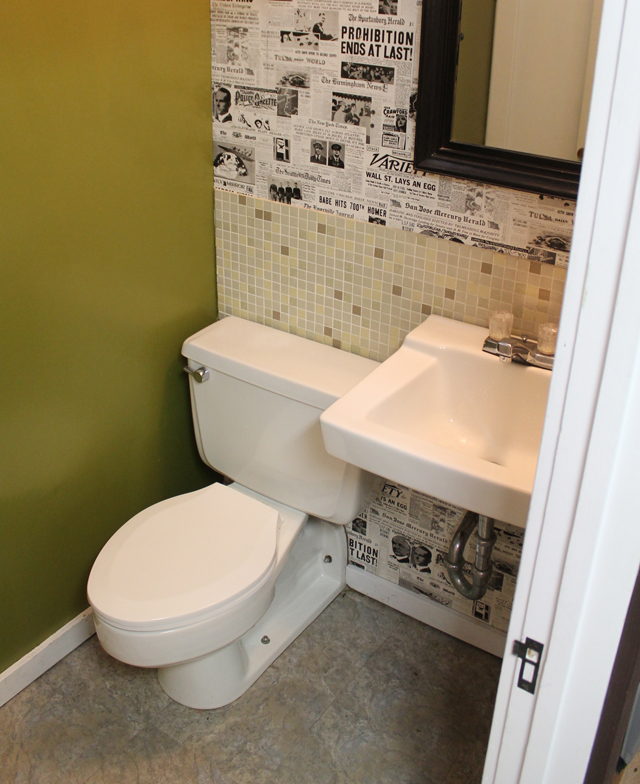 The floor was covered in peel and stick linoleum squares that were applied directly to the concrete. I’m sure it was a great solution when it was put down (so easy! so fast! so cheap!) but there are better options now. Options that I was more than happy to explore. 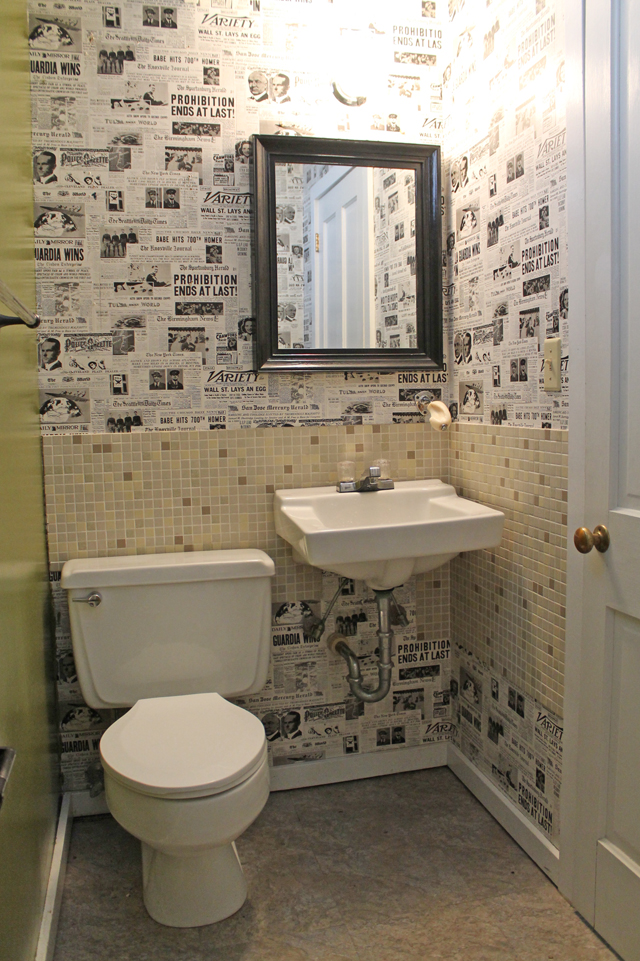 I actually quite loved the wallpaper. The Mister and I are both old movie fans and he’s quite a history buff so this newspaper themed wallpaper seemed kind of fitting for us. Plus, what man doesn’t like something to read while he’s urinating? In intervals of one to three minutes I’ve read and memorized every single word on that wall. Perhaps if the wallpaper wasn’t interrupted by a strip of tile, I might have kept it. But as you can see in the photo above the wallpaper is interrupted by rather haphazardly placed tile. Better to pull it all down and start fresh! 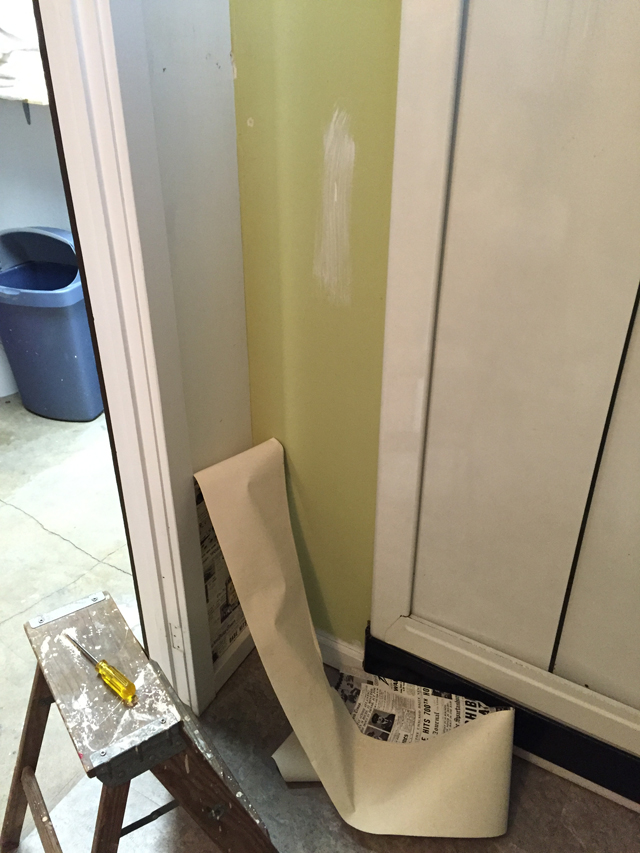 Fortunately, the wallpaper came down in clean strips. If you think I’m nerdy enough to have rolled that used wallpaper up and stash it away for later use, you’re damn right! I don’t know what I’ll do with it, but just like those vines from the garage, I’ll find some use for it. 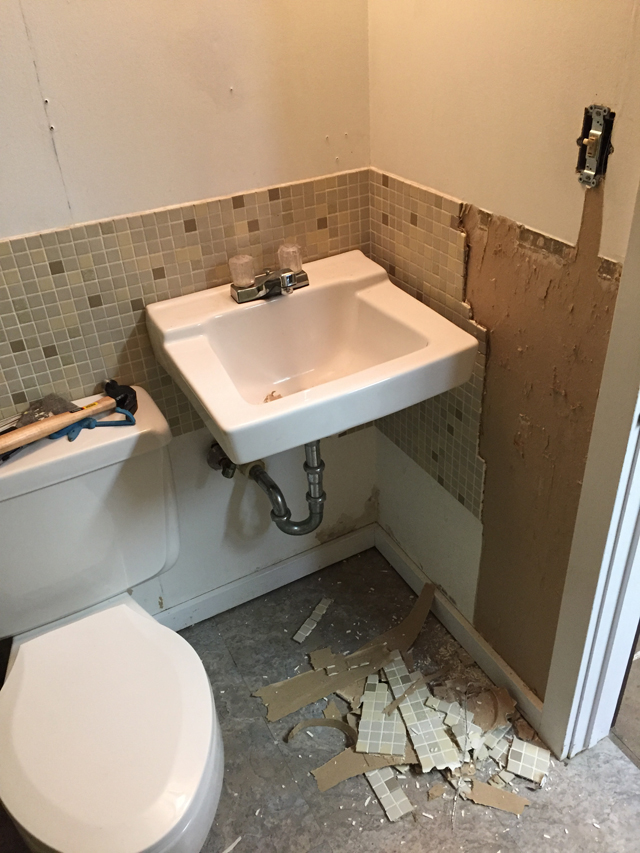 The tile, on the other hand, was not quite as cooperative. As I used the putty knife to pry the tile from the wall, it brought along with it a layer of paper from the drywall. It was messy and I knew that it would require a lot of patching plaster. But it would eventually be worth it. (Also, to be honest, my parents were visiting the weekend that I worked on this and my mom volunteered to patch the wall. Thanks Mom!) 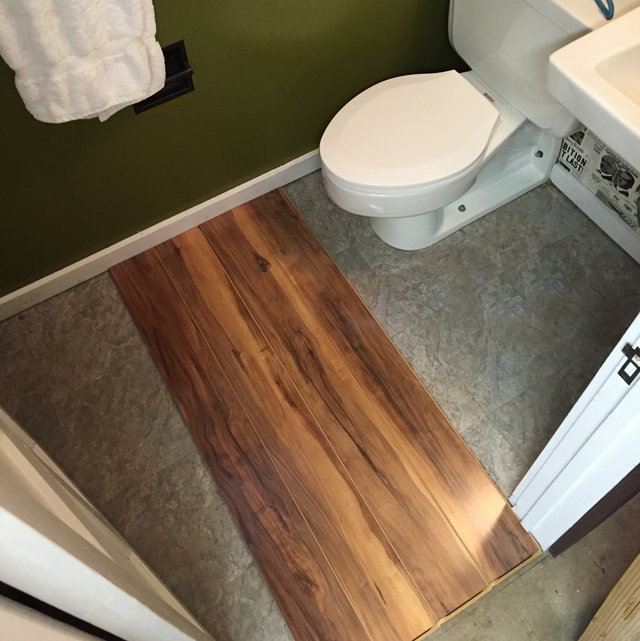 We scraped, patched, sanded and painted the walls before we put down the flooring. But of course before we did anything, we laid a few of the planks of the new laminate flooring down to see which direction we wanted to place to them. (Also, because I was itching to see how it would look!) As you can see in the photo above, the planks were practically perfectly sized if we installed them vertically with the doorway. That saved us at least four cuts so that’s the direction we chose. 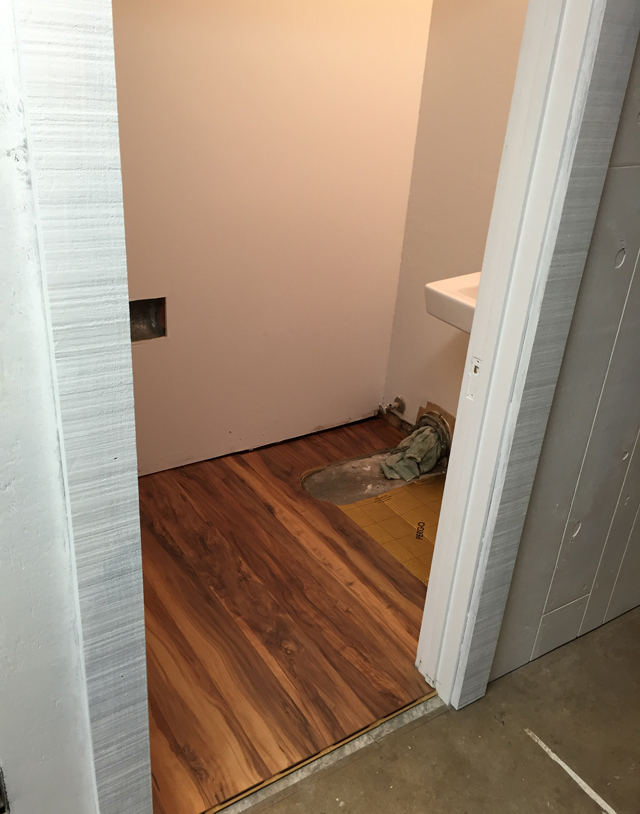 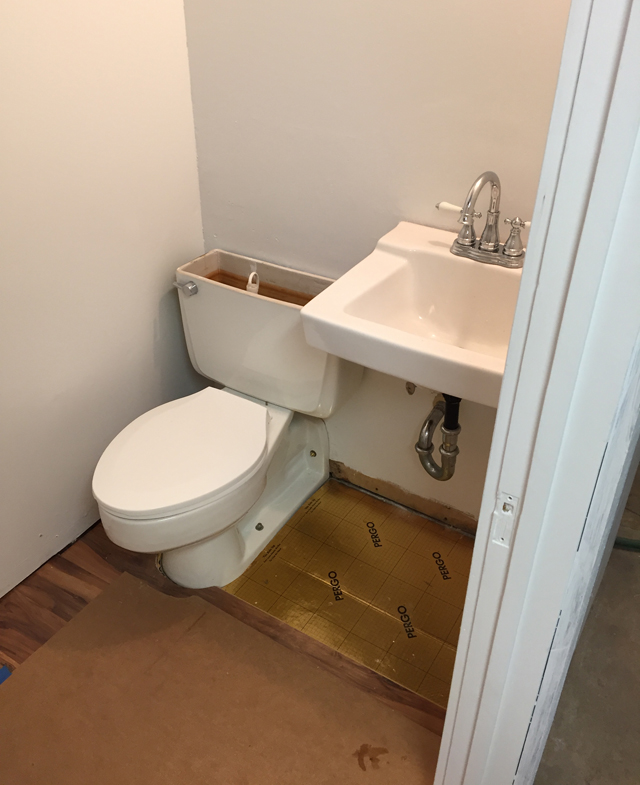 Realizing that we’d have to special order a new toilet, we decided to clean up and re-install the old toilet. And since we didn’t want to have to change the location of the plumbing in the wall, we couldn’t install the flooring under the toilet lest it raise it too much to match up with the drain in the wall. So that means we had to work around the toilet. 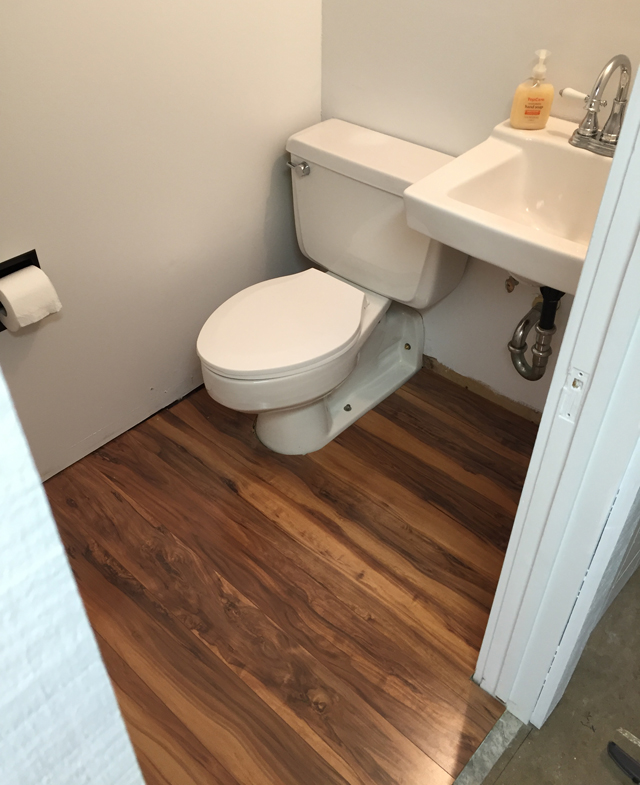 It took a lot of measuring, some creative cutting and a fair amount of swearing, but we finally got it all installed. 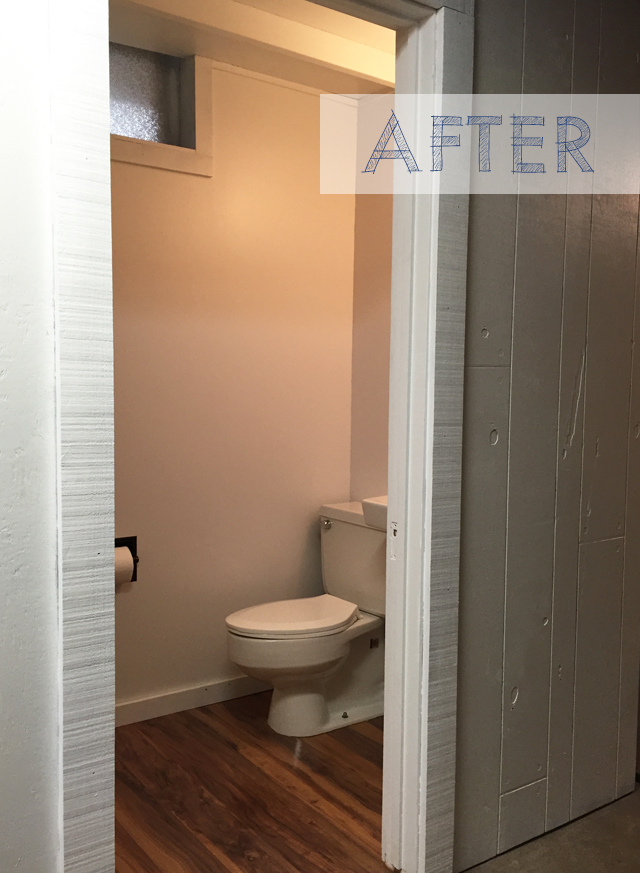 While I was at it, I painted the dated brown wood paneling on the outside of the bathroom too. What was once a dark and dreary basement bathroom is now a brighter, happier and cleaner space. 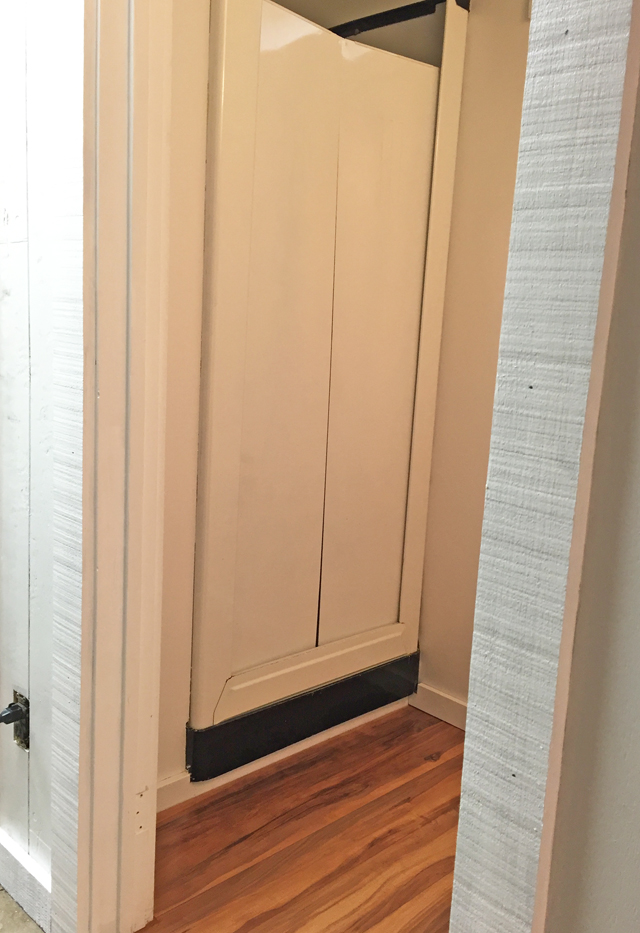 And of course we didn’t touch the Bathking shower. That is and always will be my favorite thing in the basement. I had also bought a new pedestal sink to the replace the wall mounted sink. After we decided to keep the old toilet, however, the new sink would not fit. So I decided to clean up the old sink and just replace the faucet. In the end, the only thing that’s new in this bathroom is the flooring. Everything else was just scrubbed clean. 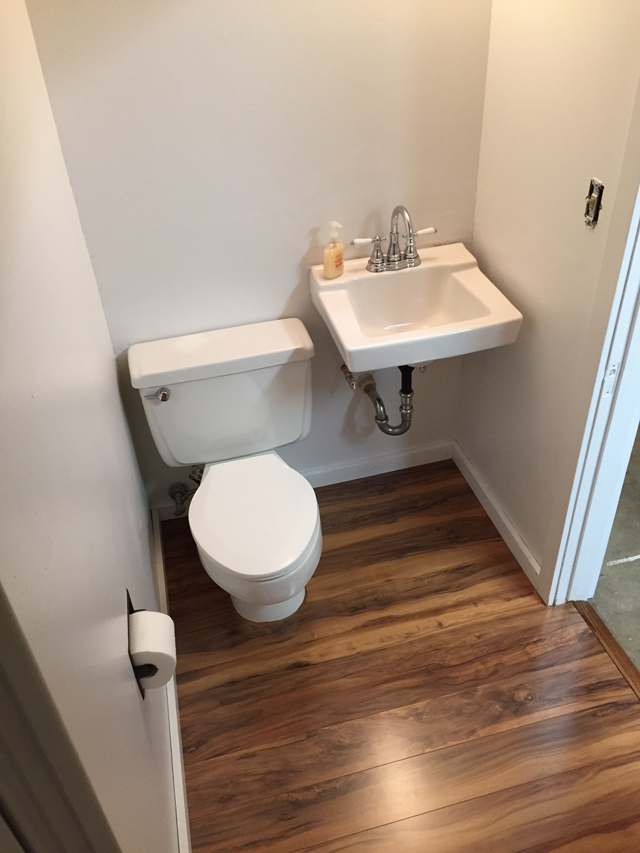 There’s still a bit of work to do to finish the room. When I removed the door the bathroom I realized how much space that freed up. So the plan is to install a barn door on the bathroom. I also need to add towel racks and some other accessories.

Which Throne Will We Own? Shopping for a New Toilet