This Vintage Ekco Vegetable Peeler Just Wants to Be Used 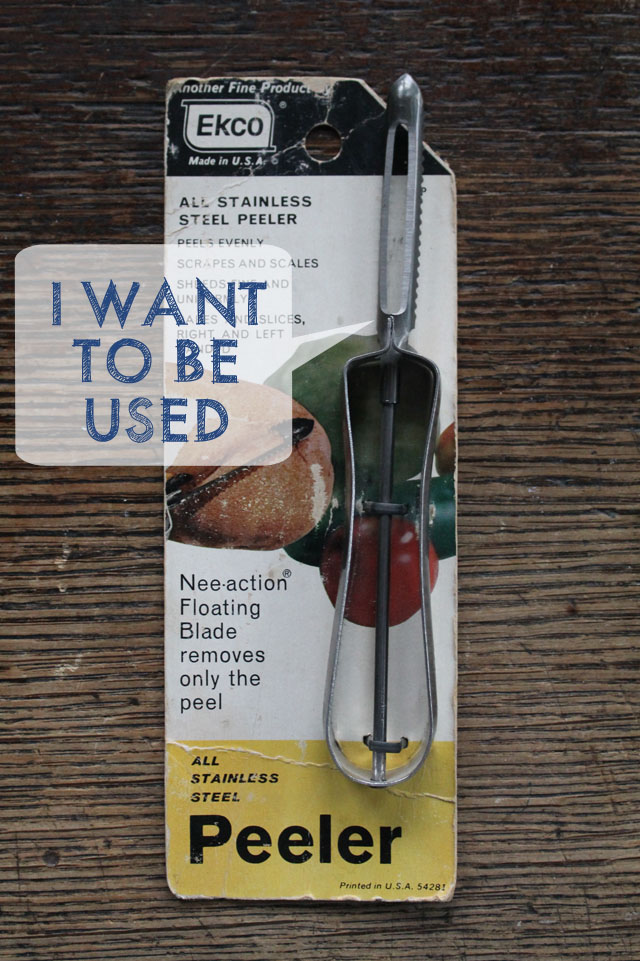 I was having one of those mostly unsuccessful trips to the antique mall so I started digging deeper. You know, crouching down and looking behind things and really searching for a good find. I was NOT going to leave empty handed dammit! And then there it was, a vintage Ekco vegetable peeler still attached to its original packaging. Take me home and use me, it seemed to say to me. Don’t mind if i do!

How ridiculous is it that I am excited about a vegetable peeler? Uh, yeah, pretty damned silly, isn’t it? But I make no apologies for my simple pleasures. Especially when those pleasures cost one dollar and promise a lifetime of enjoyment … not to mention hours of research possibilities.

It seems like every time I come home with a new secondhand find, I also learn about American manufacturing history. Like the Dormey mixer I picked up a couple weeks ago, the company behind this peeler, Ekco, has a connection to Chicago.

Ekco was founded by Edward Katzinger, a journeyman tinsmith who emigrated from Austria to New York City in 1881 at the age of 18. He left his secure $25-a-week job as a master mechanic in a New York tinsmith shop to open a business in Chicago in 1888. Named the Edward Katzinger Co., this concern manufactured tin pans for commercial bakeries. By 1899 the company, which was always profitable, had a product line that included equipment for confectioners and ice cream manufacturers as well as bakeries. A five-story factory went up in 1906 and a seven-story addition in 1913.

Born over the shop in 1894, Edward Katzinger’s son Arthur was an unruly child expelled from high school. He was packed off to a military school and returned, reformed, to become a 12-letter athlete and captain of the football, basketball, and track teams at Armour Institute (later the Illinois Institute of Technology), from where he graduated with a degree in mechanical engineering in 1916. He then joined his father’s company as plant manager. He later said that, after the death of an older brother in 1919, his father “took me out of the factory and told me to run the company.”

In 1923 the Katzingers built a new, up-to-date two-story factory on Chicago’s Northwest Side.

Through the decades, Ekco continued to grow and diversify its business. In the 1930’s and ’40’s, it acquired other housewares companies, like Geneva Cutlery Co. and Massillon Aluminum Co. The Funding Universe post about the company states that, “By the late 1950s it was said that Ekco produced some 65 percent of all kitchen tools and 40 percent of all kitchen and table cutlery.”

Ekco has been bought a sold a couple of times in more recent decades but as of “1995 Ekco owned seven manufacturing and distribution plants in the United States and an office and distribution facility in Canada.”

I don’t know when in the company’s history our vegetable peeler would have been made. Based on the packaging, I’m guessing the 1970’s or ’80s. The fact that the peeler is still packaged makes me think that it came out of an old hardware store that went out of business.

The peeler came to the Dream House just in the nick of time. I’ve been using a paring knife to peel root vegetables. Apparently my knife skills are not that great because I would usually end up with just a little nubbin of carrot by the time I was finished peeling it. Freed from its packaging, the peeler has been has been making short work of prepping potatoes and carrots.

Top 7 DIY Security Cameras: Someone to Watch Over Me