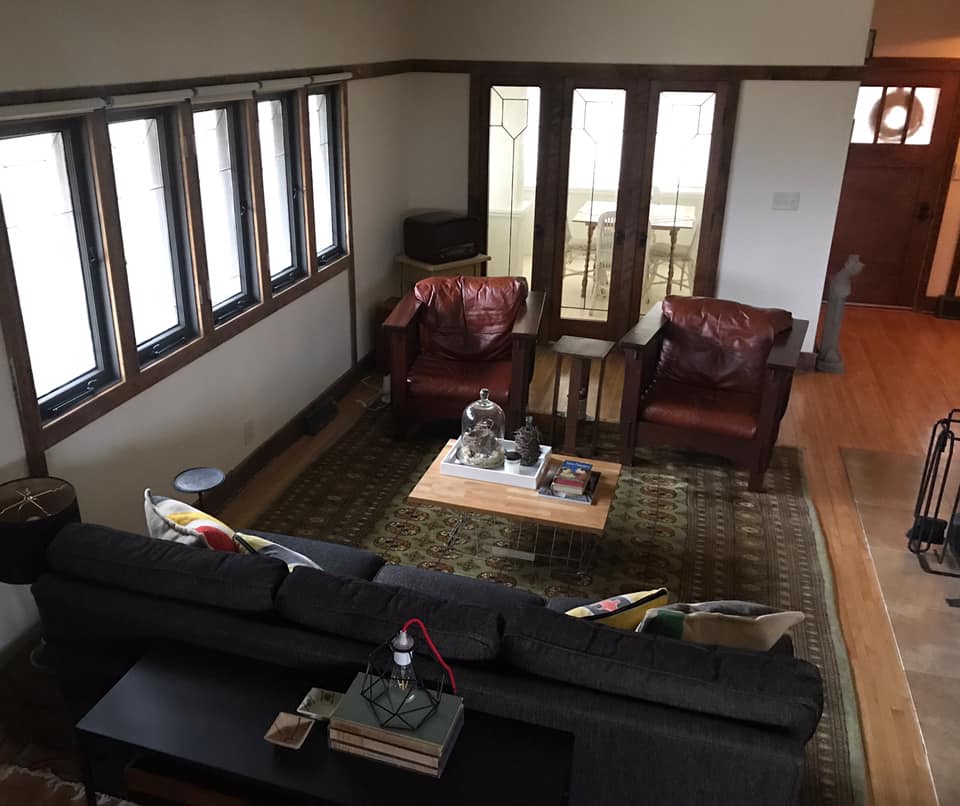 When we first moved in and bought this sofa for the living room, we placed it under the windows, parallel to the fireplace. At the time it seemed like the only logical placement for the sofa in this space. The rug – a hand-me-down from a friend – came along a couple years later. With the sofa placed under the window, the rug seemed too big for the room. It sat rolled up like a gigantic wool sausage in the basement for the next three years.

Well, we temporarily moved the sofa when we started stripping the wood trim and windows. Not knowing how long the window project would take, we placed the sofa perpendicular to the fireplace so we could still use it … and suddenly it all made sense. The rug came up from the basement and bingo! the whole room suddenly came together. Moving the sofa and adding the rug not only changed the room, it has opened up our view through the gorgeous zinc glass windows. You gotta love happy accidents, right?

Here’s a quick peek of the room before we moved the sofa. Note how the tone of the room has shifted with the new/old rug. 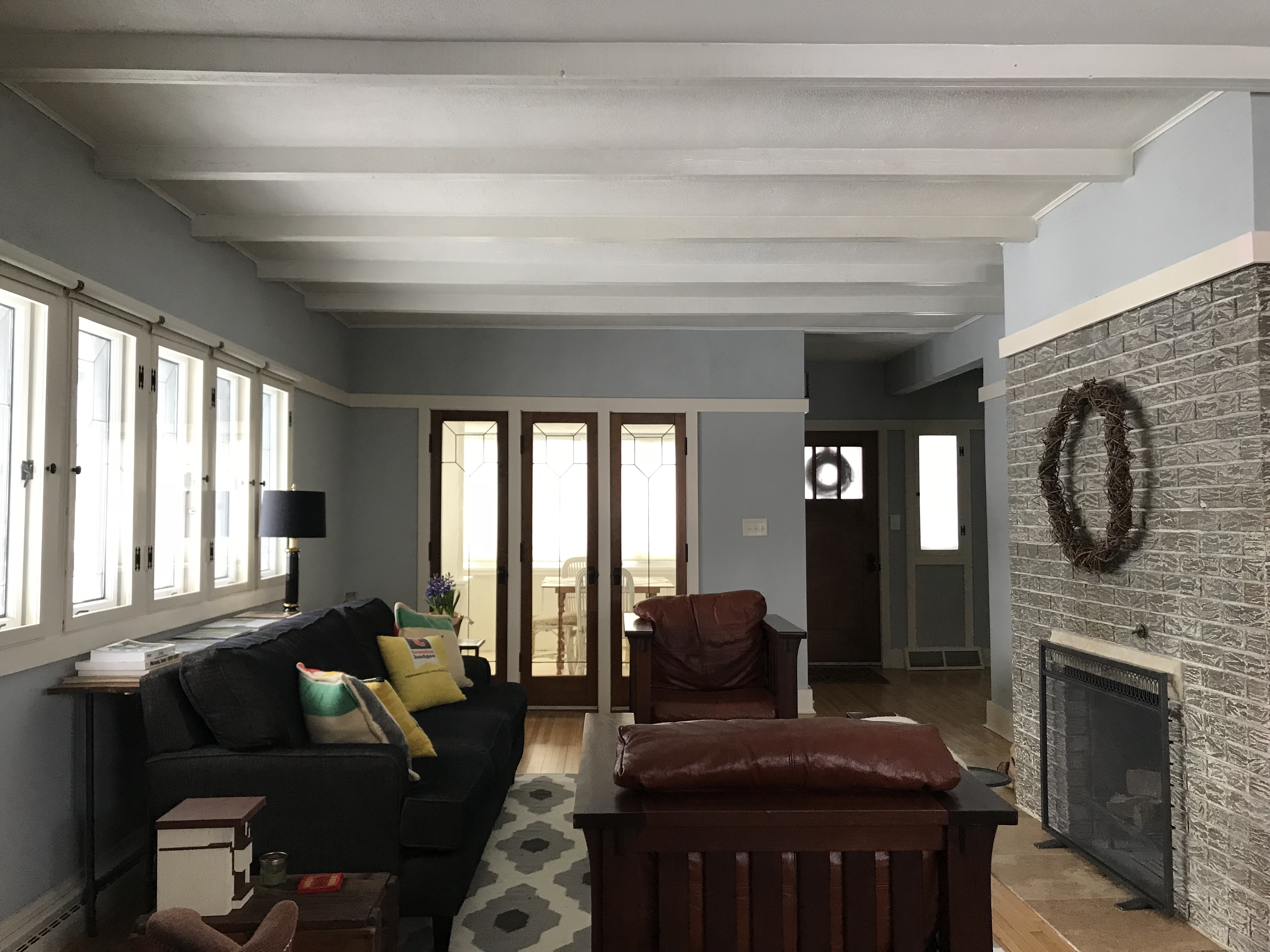 Also, wow! The room looks SO DIFFERENT now that we’ve stripped the trim! 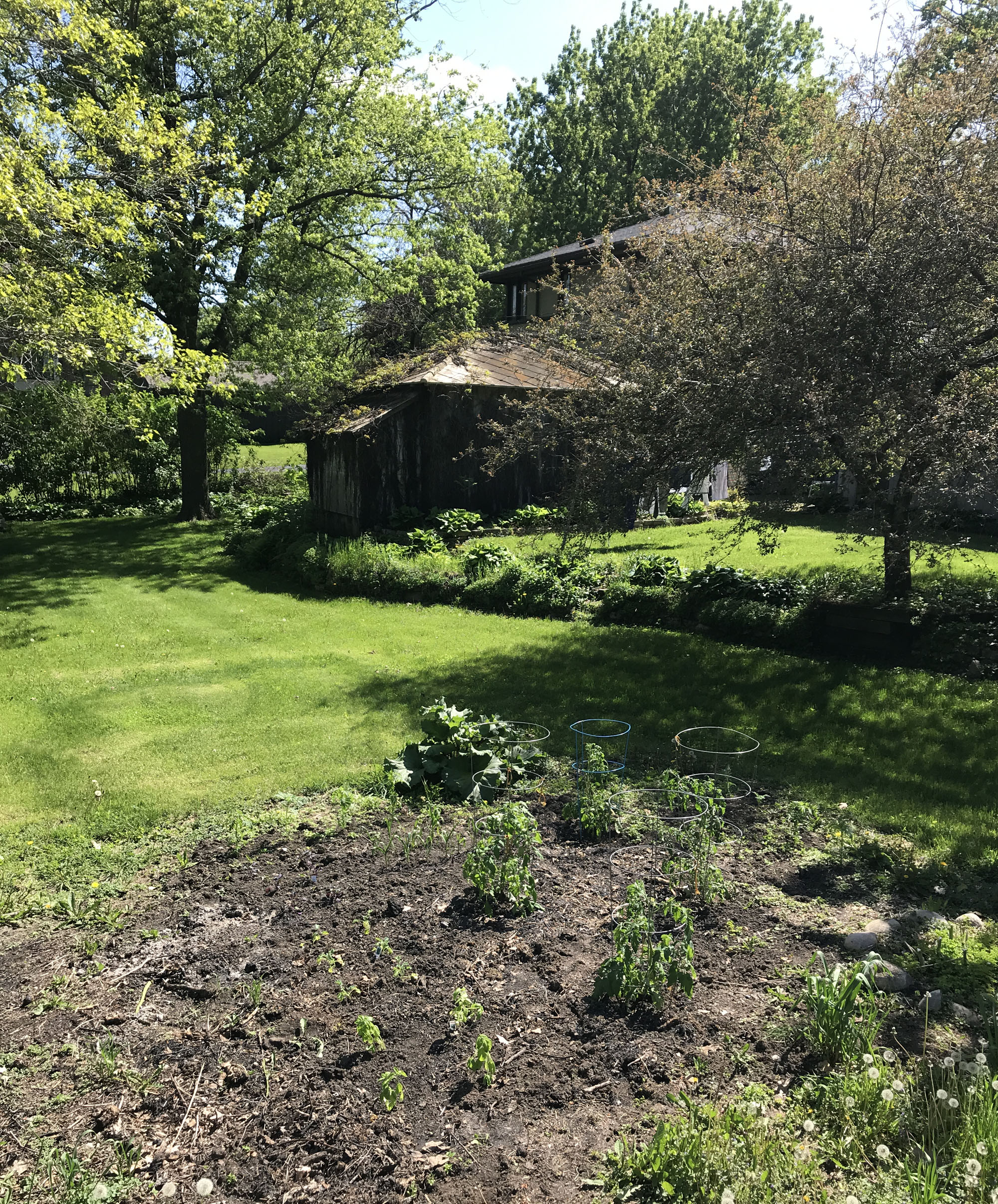 It has become somewhat of a tradition that we plant our garden over Memorial Day weekend. Not only is Memorial Day the unofficial kickoff to summer and the first long weekend of the year, it’s also when it’s finally warm enough here in the upper Midwest to put plants in the ground without fear of a final frost.

We had never really intended to garden. While we both love food and frequently shop farmers markets for fresh, local produce, we’ve always seen our thumbs as more black than green. Judging by our record with houseplants, we’d be sentenced to life in prison for the neglectful death and overwatering of many a poor, unsuspecting little life. Still, former owners had a garden already plotted out and that first spring we put in a few plants as an experiment. By midsummer we were feasting on lettuces and green beans and vine ripened tomatoes. And let me tell you: after you’ve eaten a tomato fresh from the vine, you’ll never touch a mealy, tasteless tomato from the grocery store again. We’ve been putting out gardens ever since.

There seems to be something magical in this Iowa soil that makes our gardens successful. No matter what we’ve planted in the garden, it matures and produces fruits or vegetables. The only thing we’ve had difficulty growing is green beans. That failure has nothing to do with the soil, mind you. We did get a healthy harvest of green beans during our first summer of gardening. Every summer since then, however, the green bean plants are attacked by rabbits before they ever get a chance to grow. As soon as the bean seeds sprout and break ground, the rabbits come along and eat the leaves. The poor little plants never have a chance to produce a single bean.

There are some other plants that we’ve learned not to repeat. Brussels sprouts are easy, but it takes too long between planting and harvest and the plants take up too much space in the meantime. The same goes for broccoli. We’ll just stick to getting those vegetables from the grocery store.

Last year was the first garden that had a singular purpose: salsa. We planted more tomato and pepper plants that we thought necessary and ended up with crop upon crop of salsa ingredients. We froze dozens of containers of salsa and canned dozens more in jars. We’re still eating last year’s canned salsa!

And so we’re repeating that plan this year. We got the tomatoes and onions in the ground this weekend but forgot to pick up pepper plants when we were at the greenhouse. We also got a few kale plants in the ground because you gotta love those leafy greens!

Our garden definitely won’t win any prizes. We tend to take a rather haphazard approach to the task. And since we can be away for weeklong stretches, the weeds tend to get away from us, making it difficult to discern between invasive plants and something that will actually produce edibles. We’re trying to keep things as simple and organic as possible so we’re not spraying the garden with weed treatment. As you can see in the photo at the top of this post, we’ll always have a healthy harvest of dandelions!

Beautiful or not, gardening has become a seasonal treat that we both savor. After a week in the city sitting behind desks or countless hours stuck in traffic, there’s no better treat than crouching in the garden with the moos of cows carrying across the distance as we pull weeds or clip kale leaves for lunch.

What are you planning for your garden this year?

The bathroom is often overlooked in terms of comfort and charm. We’ll put all of our efforts into making the living room and bedrooms comfortable spaces and then just settle for whatever’s already in the bathroom. I’m here to say that it’s easy (and totally worth it!) to upgrade a bathroom. Whether you rent or own, all it takes is a few affordable items to create the creature comforts that will take your bathroom from lousy to luxe. END_OF_DOCUMENT_TOKEN_TO_BE_REPLACED

how to, kitchen, recipes, setting up home 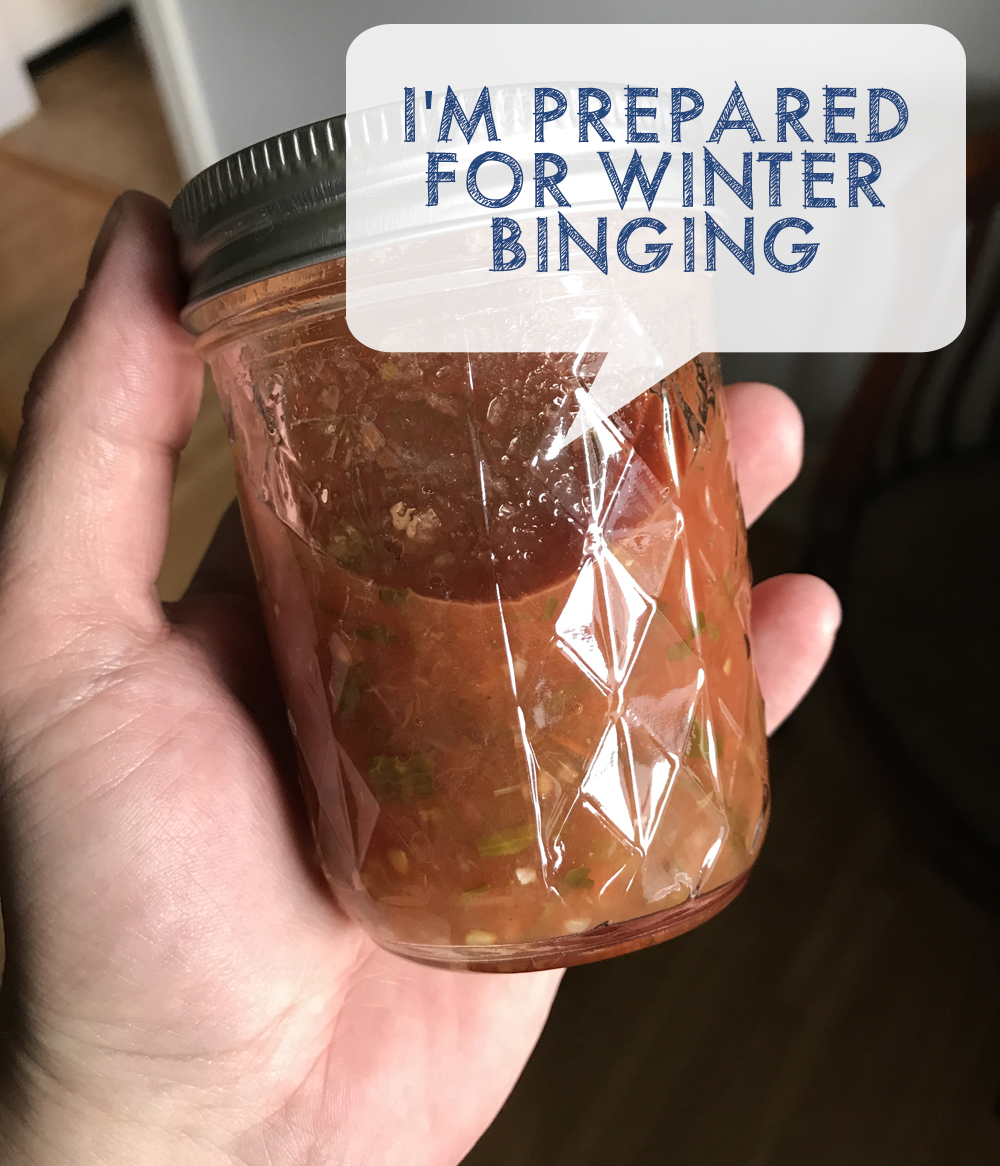 Every year that we’ve planted a garden at the house (for those of you not keeping score, the number is 4), I’ve announced that I’m going to have a salsa garden. Each spring I’ve started out by planting all the ingredients for salsa. I excitedly bury my pepper and tomato seedlings in the garden and declare that this will be the year that we’re swimming in salsa! But something always ends up going wrong. The garlic doesn’t come up or the tomatoes under-deliver in their bounty.

Well, mark it in your calendars, folks, that 2017 is the summer of the salsa garden at the Delbert Meier house. The tomatoes have come in strong, garlic is abundant and the peppers have performed. And what I’ve lacked in ingredients from our own garden, I’ve managed to pick up at farmers markets.

Salsa is one of those simple recipes that makes you question ever buying it from a grocery store. In addition to the veggies, it’s really just some vinegar, salt and herbs all mixed up to make a yummy dipping sauce. I improvised my recipe for salsa so my measurements aren’t exact. I did check the label on the side of a jar of salsa to confirm that I was on the right patch with ingredients. But from there, it’s all a matter of taste.

END_OF_DOCUMENT_TOKEN_TO_BE_REPLACED

American Standard “Clean” Toilet: The Throne to Own 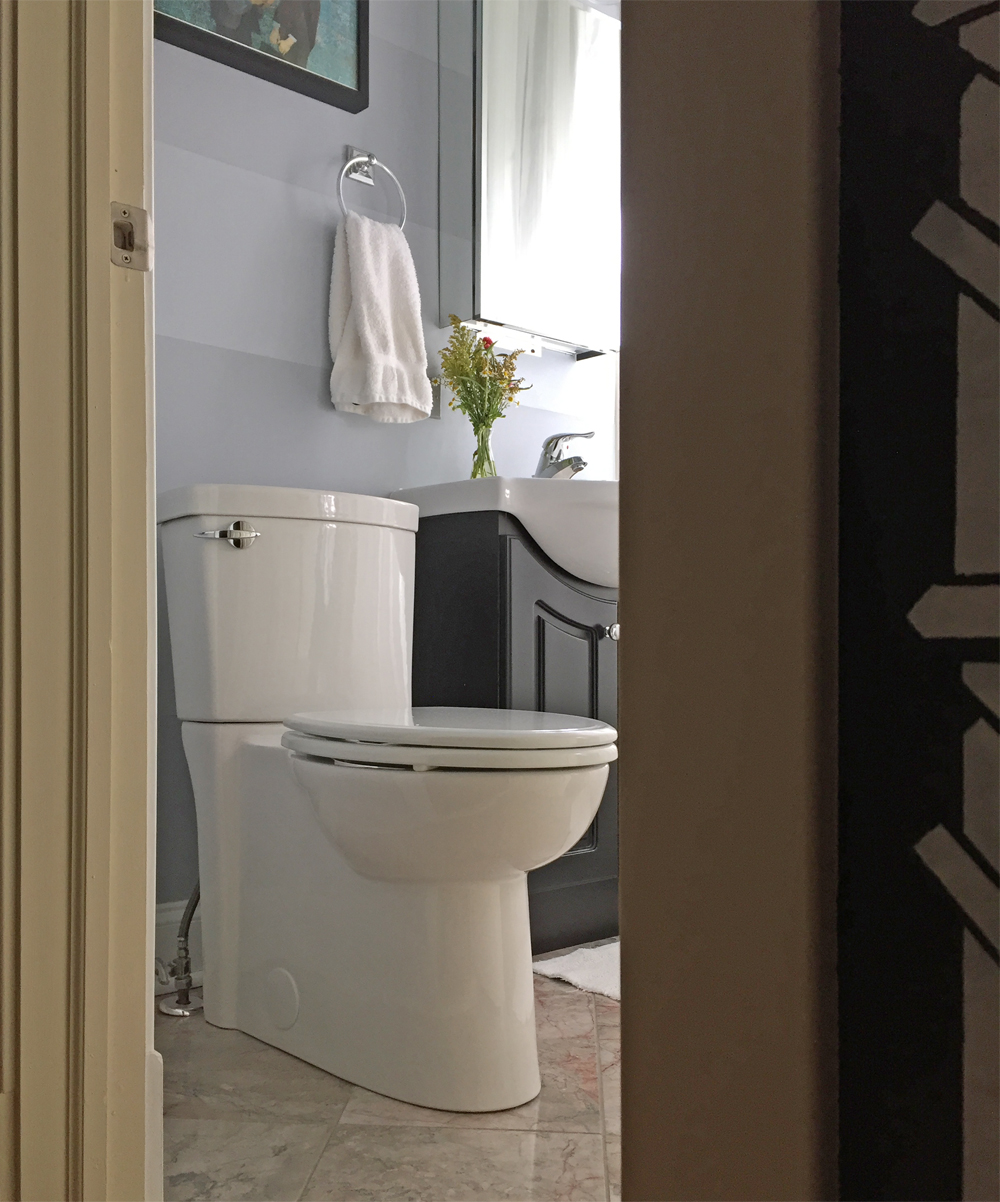 You know you’ve reached middle age when you get excited about a toilet. Although, really, can you name another fixture in your home that you have such an intimate relationship with?

In the past six months we’ve purchased two toilets: one for the bathroom in the city apartment and one for the bathroom here at the house. The toilet for the city apartment was a total duress purchase. The toilet that had been installed during the building’s gut rehab in 2006 had been causing trouble for a few years. We really shouldn’t have been surprised when we learned that the cause of a leak into our downstairs neighbor’s bathroom was coming from the toilet. And I guess we weren’t really surprised … but we weren’t really prepared to buy a new toilet either.

I wasn’t completely uneducated about toilets, mind you. Over the years I’ve written about toilets here and there. In doing research for those posts I identified three things that I wanted in our new toilet: concealed trap way, easy flushing and comfort height.

The thing about a duress purchase is that you have to make your purchase quickly, which means you’re at the mercy of what’s in stock at hardware stores. That basically eliminated the toilets on my Which Throne Will We Own  list. But then in a moment of porcelain serendipity, Lowe’s came through with a toilet that fits all of my criteria – and also happened to be under $300. 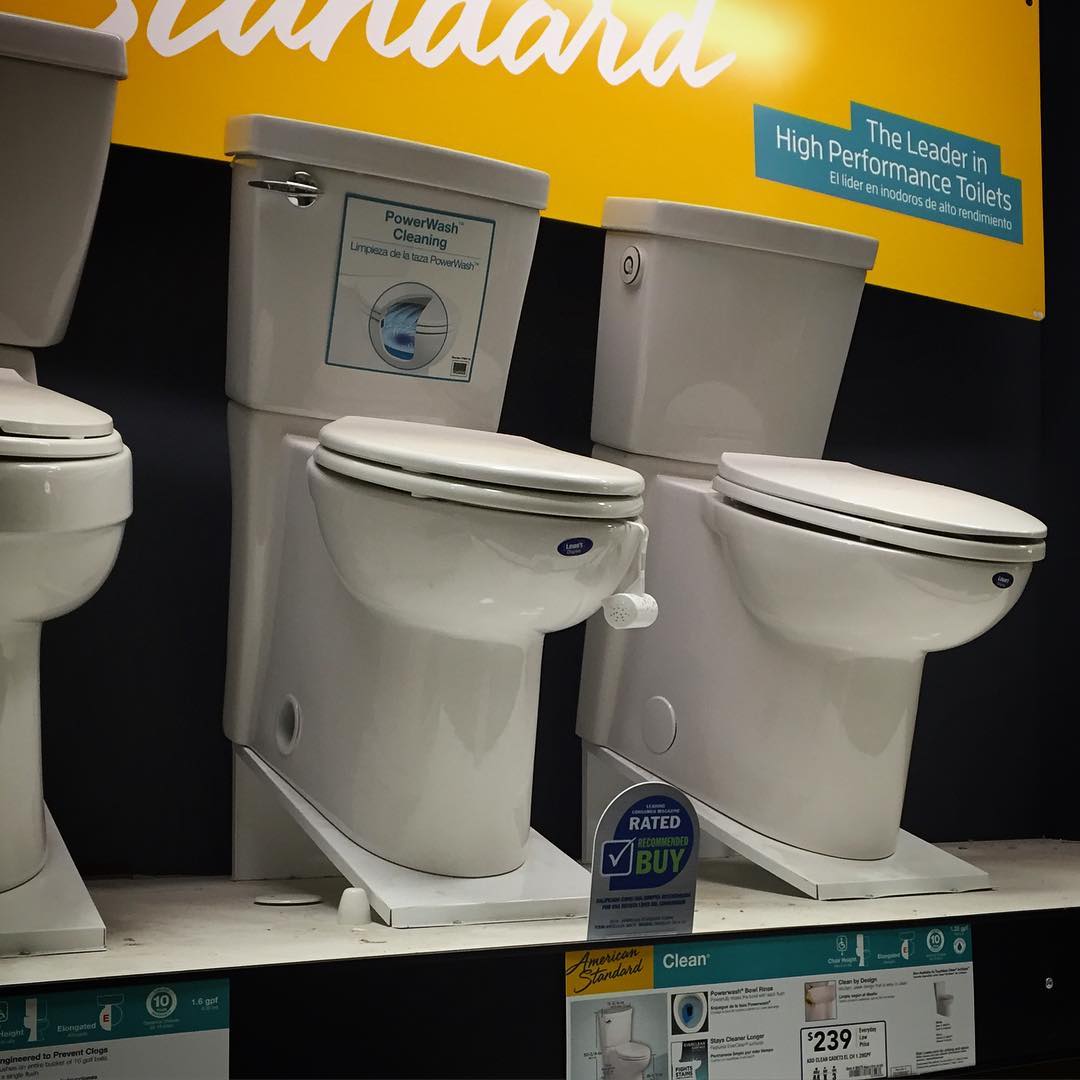 The American Standard “Clean” High Efficiency Elongated Toilet has styling that rivals the more expensive Toto toilets but at a fraction of the cost. As you can see in the photo above that I sent to The Mister when I bought the toilet, the Clean toilet came in well under $300. The concealed trapway and small tank look great in our small apartment bathroom. But perhaps even more importantly, this high efficiency toilet (1.28 gpf) packs a powerful flush! My experience with other high efficiency toilets has been that they require multiple flushes – thereby negating any water savings. The American Standard Clean toilet has a strong flushing system that rarely requires a second flush. 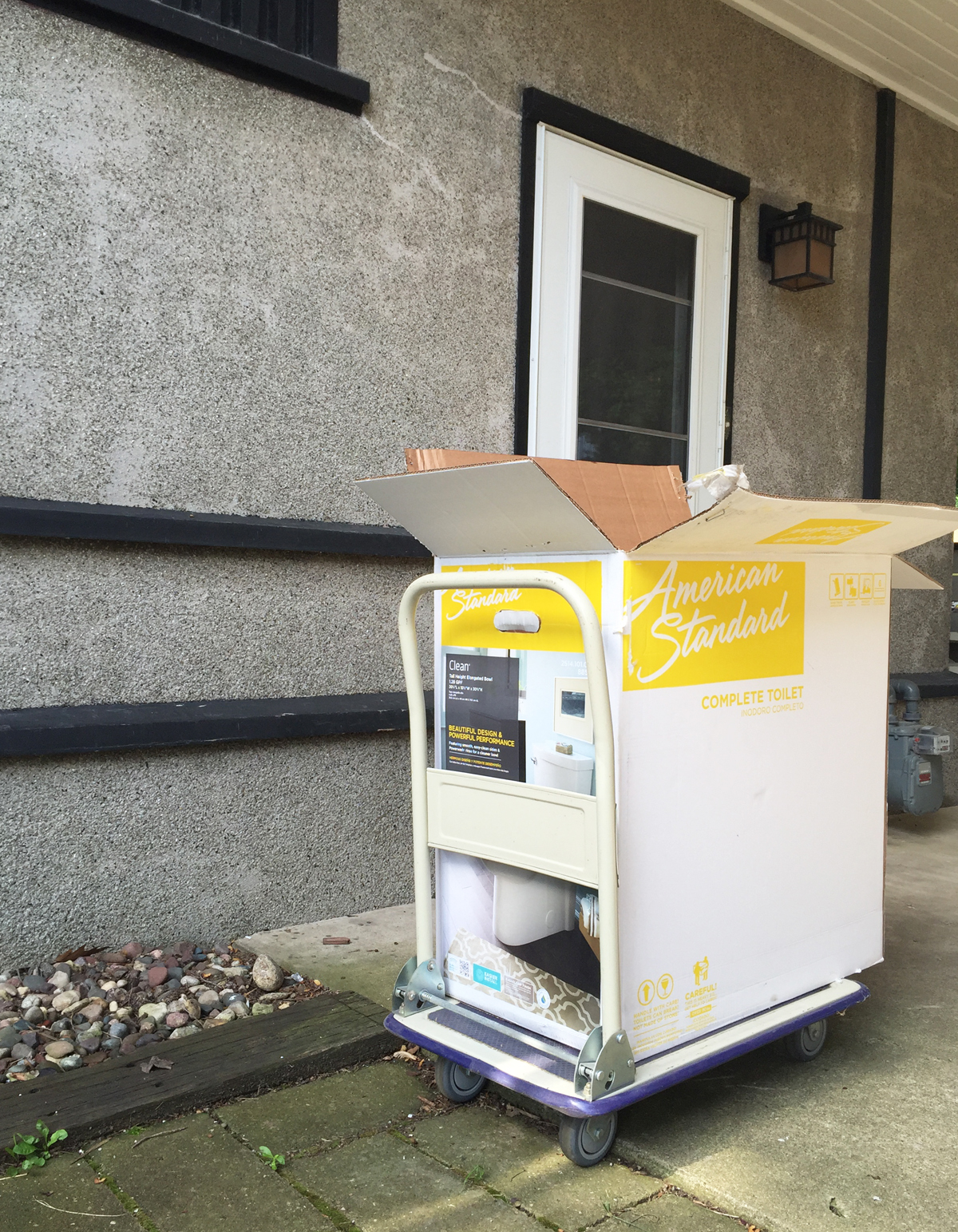 In fact, we’re so pleased with the toilet that we purchased for the apartment under duress that we bought the same toilet for the house.

DISCLOSURE: This is an honest review of our experience with the American Standard Clean Toilet. This American House was not compensation for this post. We may receive ad revenue from embedded Amazon clicks.