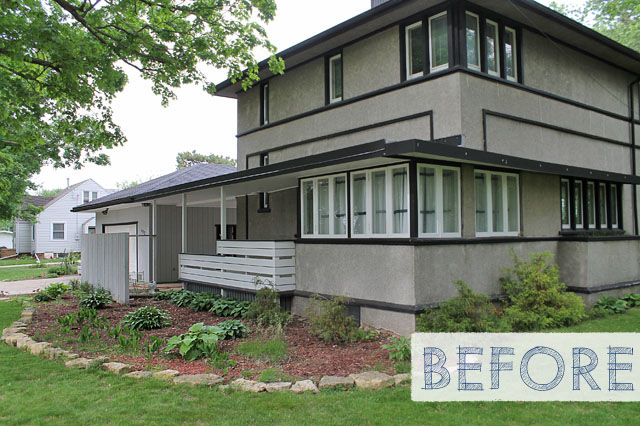 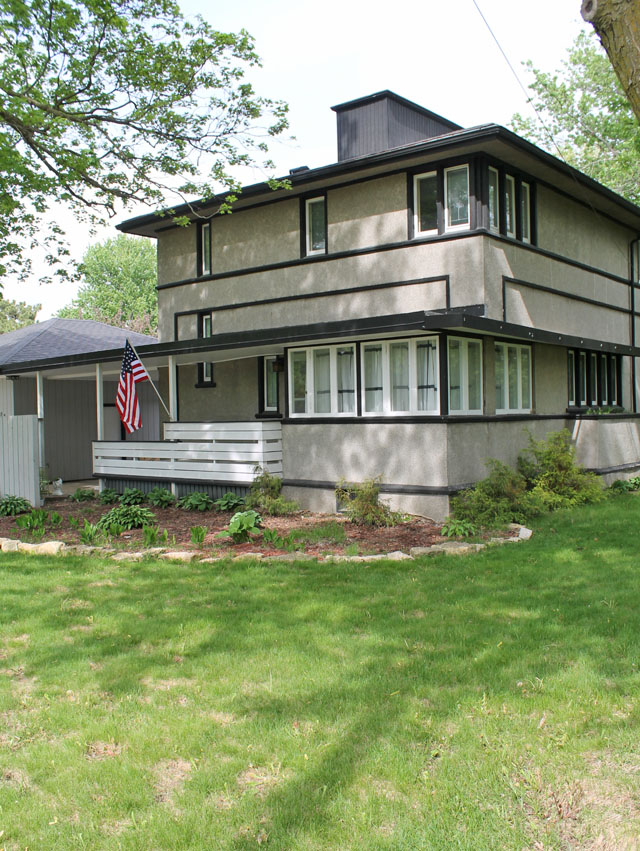 When we took possession of the house in November 2013, snow had already covered every inch of green space around the house. It wasn’t until March of this year that we finally got a look at the landscaping left to us by the former owners. What we found was a mish mosh of randomly placed plants surrounded by stone edging. There were hostas and day lilies and prairie grasses and some other plants that I couldn’t even name, all haphazardly situated within the border of the stone edging. While this may have worked at a different house, it felt like too much of a distraction for our American System Built home.

In the early days of home ownership a friend advised us to live with the landscaping for one entire year and then start making changes. Over the long, cold winter, we promised that we would indeed follow that advice. We said that we would leave the yard in whatever condition we found it and concentrate instead on our vegetable gardening for our first summer season in the house. Well, we kind of kept our promise. While we did make some changes to the landscaping in front of the house, we didn’t purchase very many new plants or shrubs. Instead we made use of almost every existing plant that had been placed by the previous owners, moving them around and creating some order, and also removed the stone edging. So, you know, we almost adhered to the original plan. 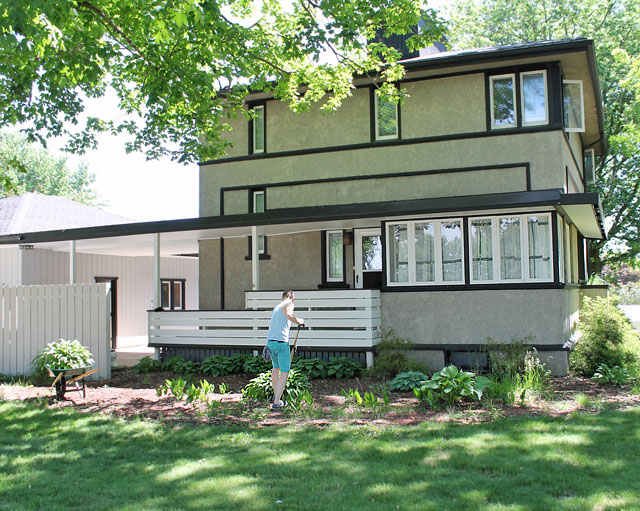 The prospect of removing all of the stones from the front yard was overwhelming to say the least. In fact, it was one of the things that made us think we would actually keep our promise and leave the landscaping as-is. But every time we would approach the house we would groan. The stone border was too distracting placed in front of our Prairie style house. And just forget about mowing around those stones! One hot, humid day back in June (why do we always choose the hottest days to work on these projects?) we finally couldn’t stand it any longer. Using a wheelbarrow and brute strength, we lugged the heavy stones around to the back of the house. Once we got started it was actually easier than we anticipated. And by the time we had removed half of the stones we could already see improvement and that gave us the inspiration to keep working on it. 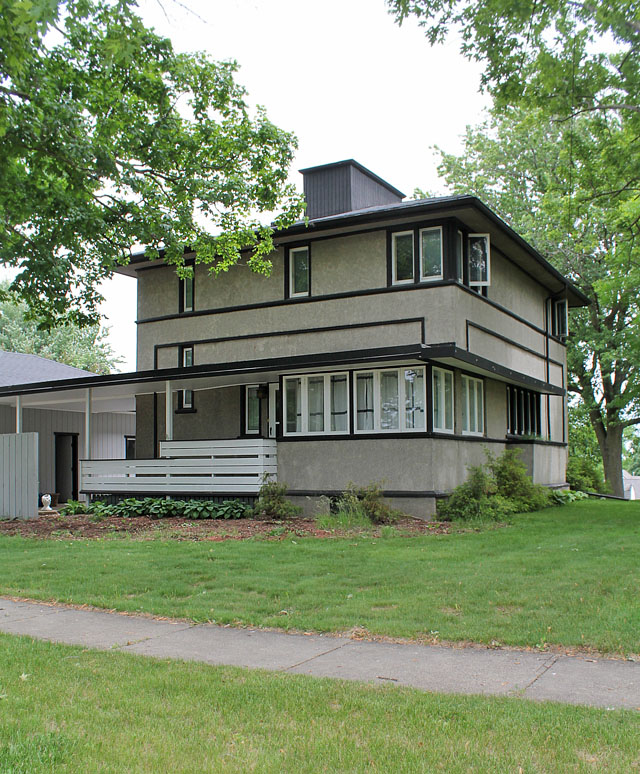 With the stone border removed (it looks so much better already!), we started the process of removing all of the plants that had been placed. We transplanted some of the hostas in front of the porch and moved the rest of the plants to other beds behind the house. 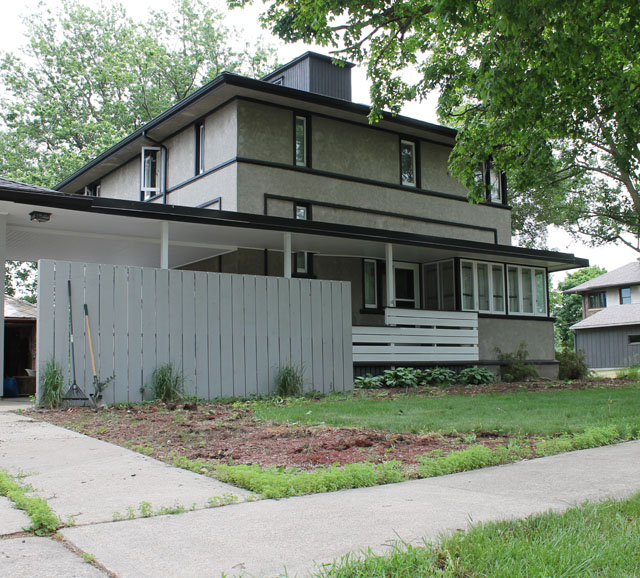 Then we scooped up the red mulch by the wheelbarrow-full and cleaned out the big bed of all the weeds. Using a hoe and shovel, we turned the earth and then spread grass seed just in time for two weeks of rain. 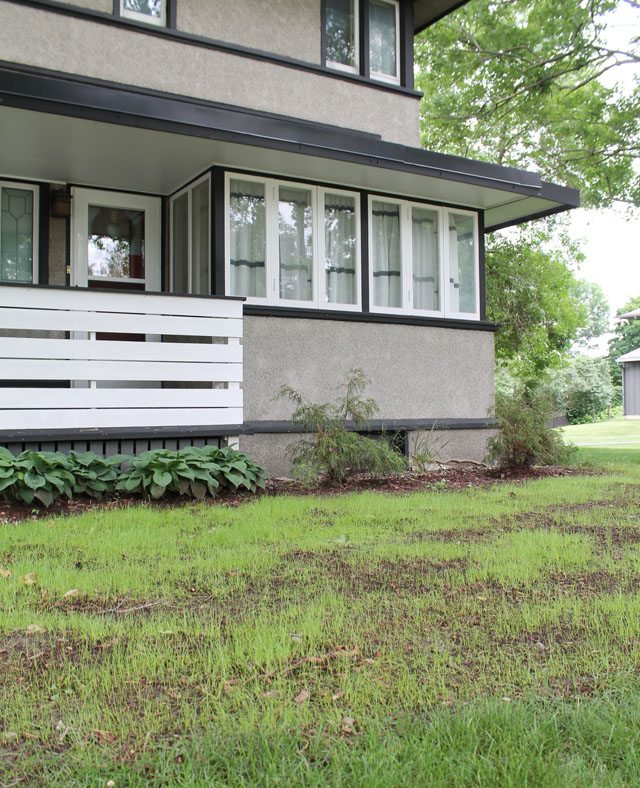 I’ve never been so happy to see so much rain. Within a couple weeks we had new grass where there was once nothing but a big open bed. 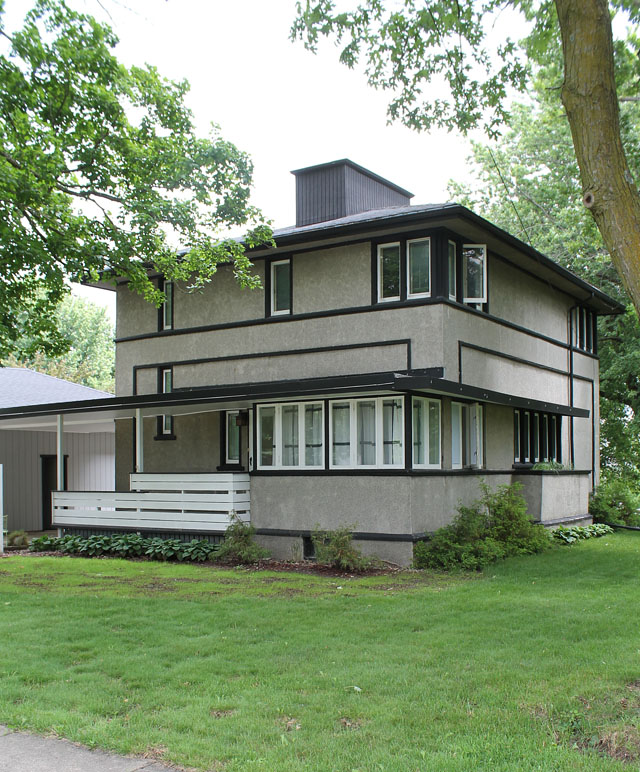 Once the grass started coming in, we could really see the progress we had made. The grass was a bit patchy at first so I went back and spread a little more seed in the bare patches. By the fourth of July we were looking at a smooth layer of grass.

And that was pretty much how the landscaping looked until the middle of August, when we finally pulled out the two wimpy evergreen shrubs in front of the sun room windows and replaced them with hydrangeas. 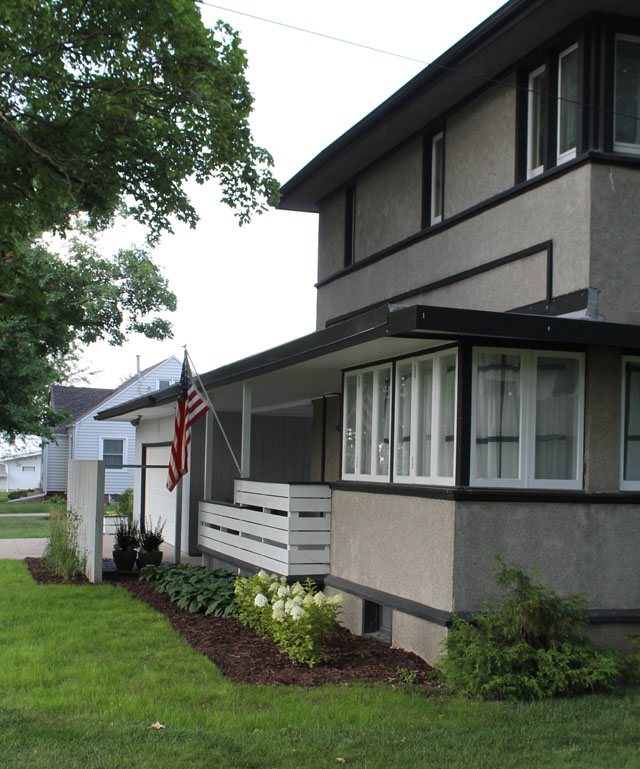 With the hydrangeas in the ground and the hostas all lined up in a row, we covered the new bed with brown mulch. I was originally looking for black mulch but I guess everyone else had the same idea. The only mulch available by the time we got around to it was red and brown. So brown it is! 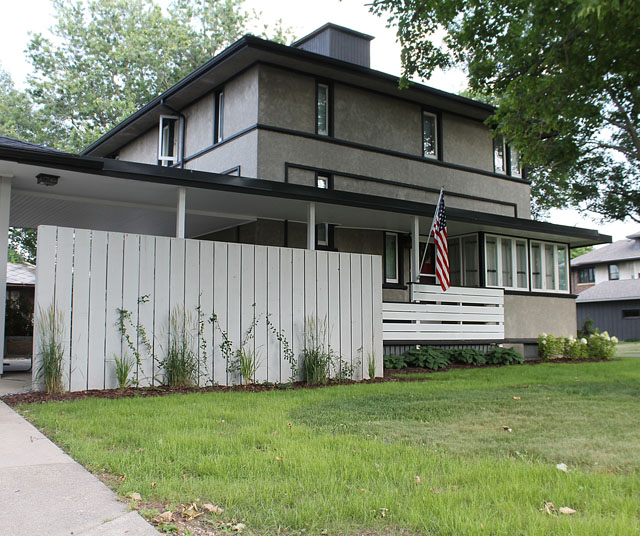 We’re pretty happy with the results of our “make it work” landscaping makeover. Now when we drive up to the house we breathe a sigh of relief instead of an exhalation of disgust. 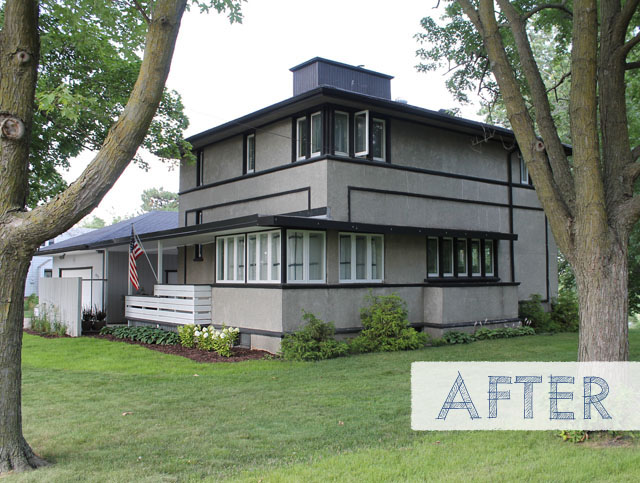 Next year we’ll do a bigger overhaul of the landscaping but until then we’ve added some curb appeal and made the front yard easier to mow.