before & after, decorating, furnishing

Before & After: Making Progress in the Master Bedroom 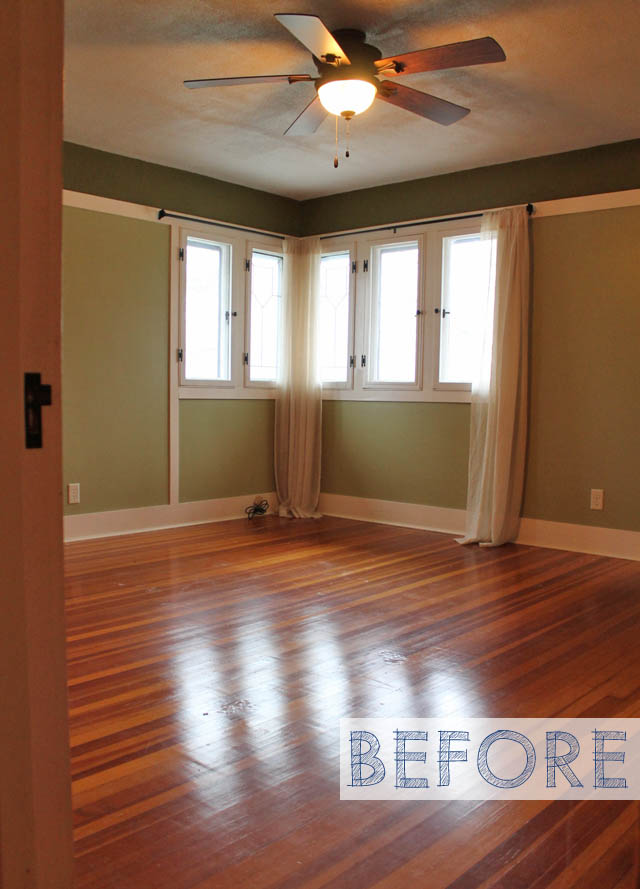 There’s nothing better than putting before and after pics side by side (or top to bottom as the case may be) to see the progress that’s being made on the Dream House. This is especially important when we start getting impatient with ourselves and feeling like we’re not getting enough done. So let’s take a look at how the master bedroom has changed since we moved in a three months ago. 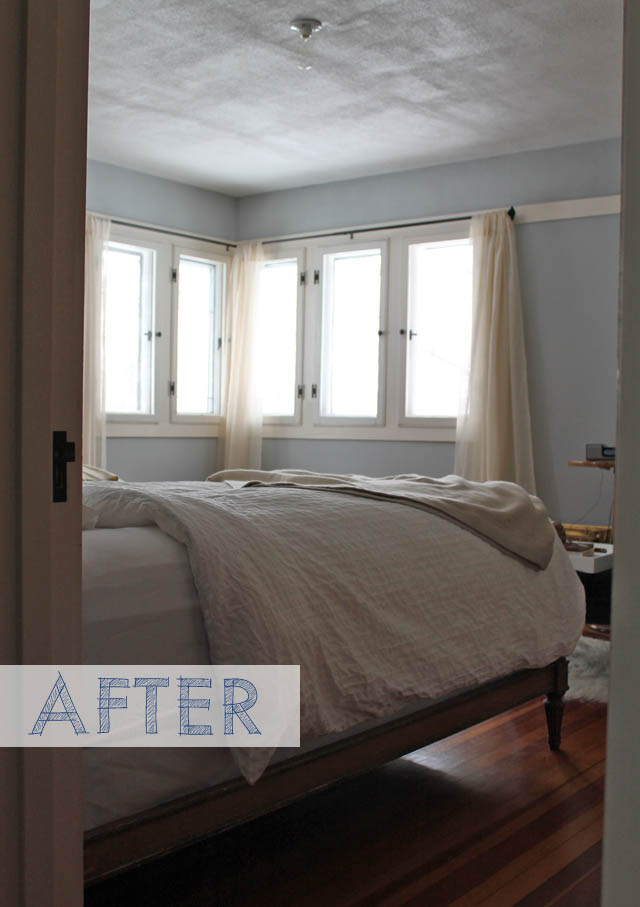 As with the rest of the house, the first step in making over the master bedroom was painting it. When we moved in the room was painted in two shades of green – a light green on the portion under the picture rail and an army green on the top. We painted all of the walls in Campfire Smoke by Valspar. By painting the room one consistent color, the walls feel more like a blank canvas rather than a visual distraction.

As you can see in the before and after pics above, we also removed the ceiling fan and replaced it with a porcelain lampholder and exposed Edison bulb. Now, I’m not one of those people who hates ceilings fans. I think they can be very convenient and in the right space they can even work visually. In this room with a relatively low ceiling and small square footage, however, the ceiling fan gobbled up the visual space. 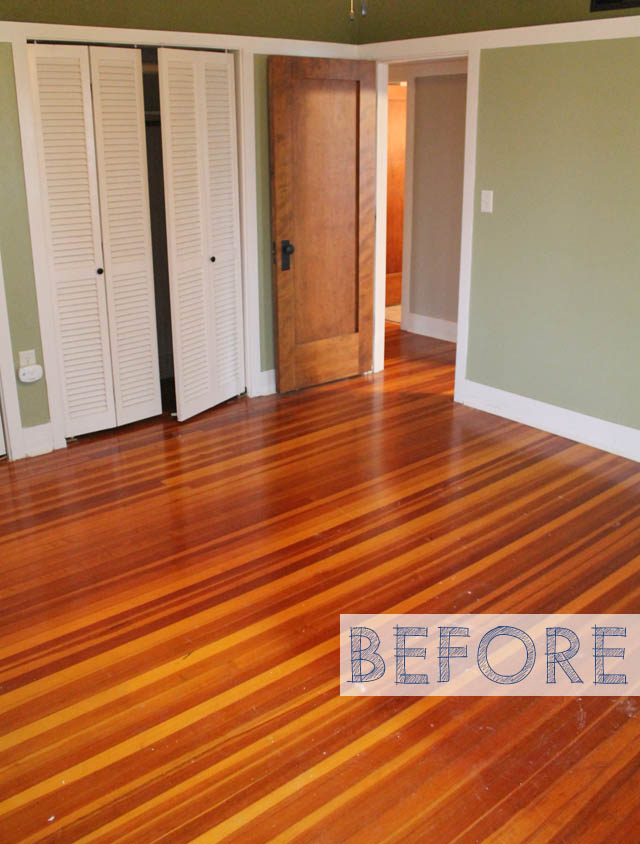 I have been totally obsessed with twin beds for a couple of years now. Perhaps it’s my love of old sitcoms like The Dick Van Dyke Show, but I find matching twin beds to be oh so charming. So when we knew we were going to buy this house with multiple bedrooms, I saw my chance to fulfill my twin bed dreams. With the master bedroom being the largest of the three rooms, it’s the perfect place for two twins. 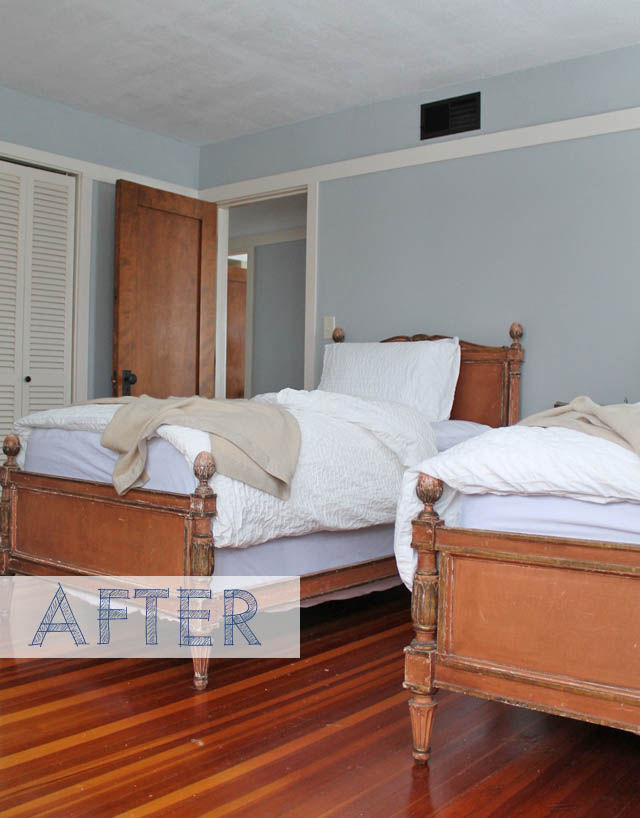 We were led to these beds by our friends Edgar and Larry. I was admiring the twin beds in their perfectly appointed guest room when Edgar said that they would keep an eye out for twins of our very own. A few days later Edgar texted me and said that he found the perfect beds at a thrift store in the city. We hadn’t even taken possession of the house yet but we went to look at their finds anyway. Edgar was right – the twin beds were perfect. We bought them that day and stowed them in the basement storage room of our city apartment until we could move into our house. 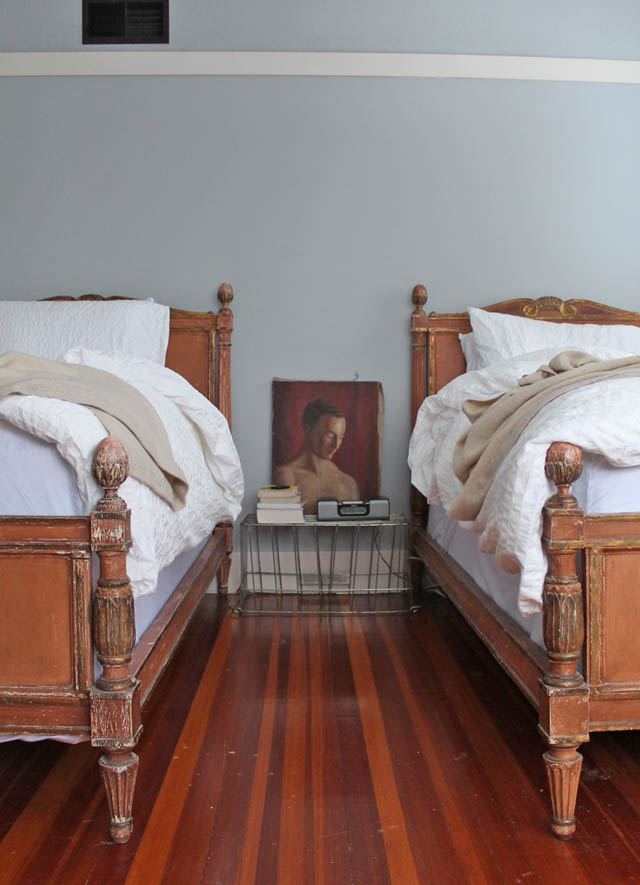 There’s still much more to be done in this room. We’re hunting for the perfect bedside table to place between to the two twins (the metal basket is just a stand-in). We’ll also add some rugs and change out the window treatments at some point. For now, however, we’re happy with the progress we’ve made. I got the twin beds I’ve been longing for, and we were also able to craft a little reading nook in the corner… 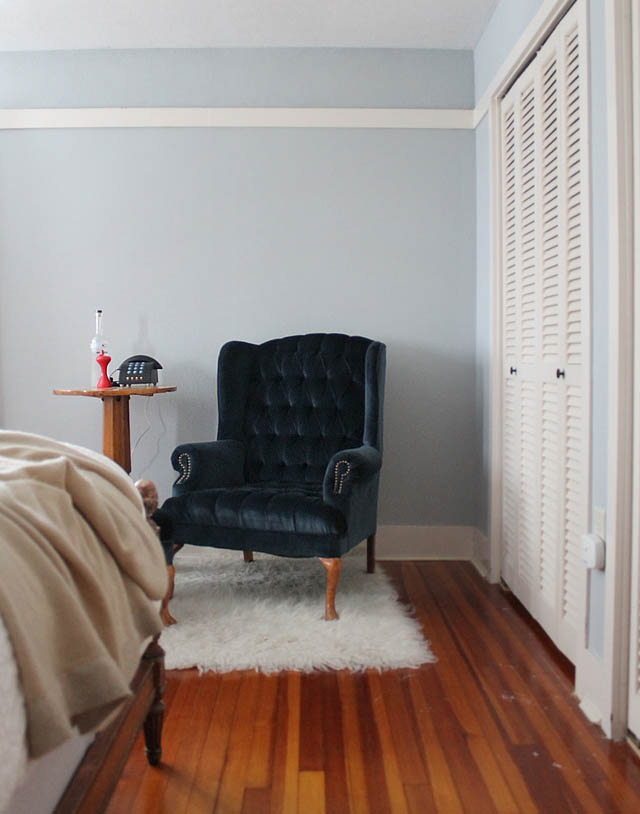 We’re both completely stumped on what to do with those louvered bi-fold doors. To say that we hate them would be an understatement. It’s not that they’re so visually unappealing as much as it’s that they’re a pain in the ass! I can’t tell you how many times they’ve fallen off their tracks and smashed a toe. We’ll definitely be replacing them but with what we’re not quite sure.

Let me reiterate – the room is not finished by any means. We need more lighting and rugs and art … but isn’t it nice to see the progress we’ve made so far?

Shopping for a New Light Fixture for the Hallway