garden, how to, small town life 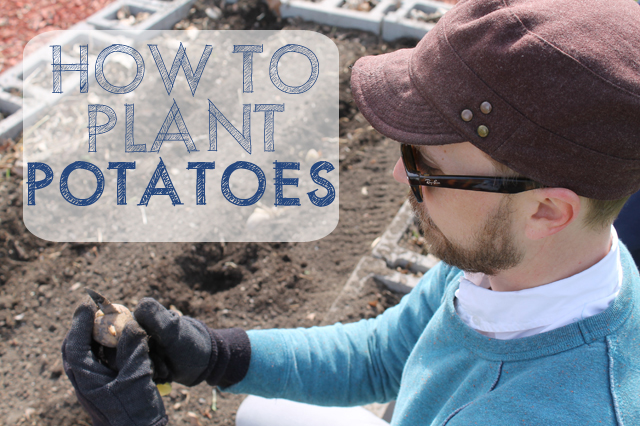 As a young boy in the Midwest, I was surrounded by skilled gardeners. I have a memory bank full of images of me standing in my grandfather’s garden as he reaped and sowed his way to a bountiful harvest. And, yet, I absorbed very little of that garden knowledge myself. I was always preoccupied with singing the latest Madonna tune and dreaming of my future as a famous celebrity correspondent for Entertainment Night to pay attention to what my grandpa was doing. Why the hell would I need to know how to farm?! I was going to go live in the city! 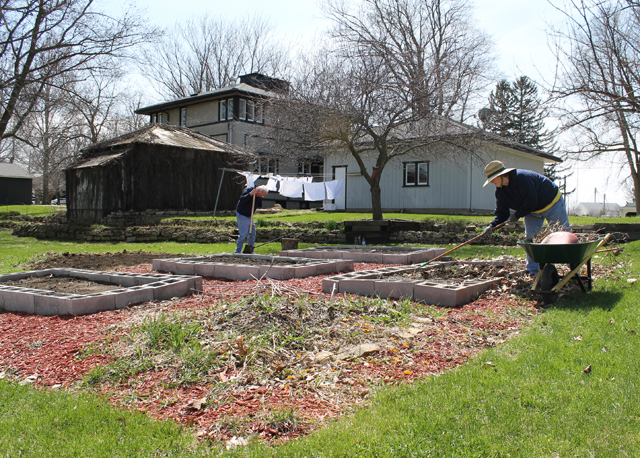 Um, yeah, I probably should have just paid attention. Gardening seemed ridiculous to me when I was a kid but now, as an adult who has become obsessed with food, it seems absolutely paramount. And now that we have a big old house with an expansive yard and garden, I really regret that I didn’t pay attention during my days in my grandpa’s garden. Lucky for us, my parents agreed to impart their gardening wisdom on us. In between rain storms over the weekend, they helped me cleaned off the raised beds and plant our first crop. We started with The Mister’s favorite food – potatoes.

HOW TO PLANT POTATOES 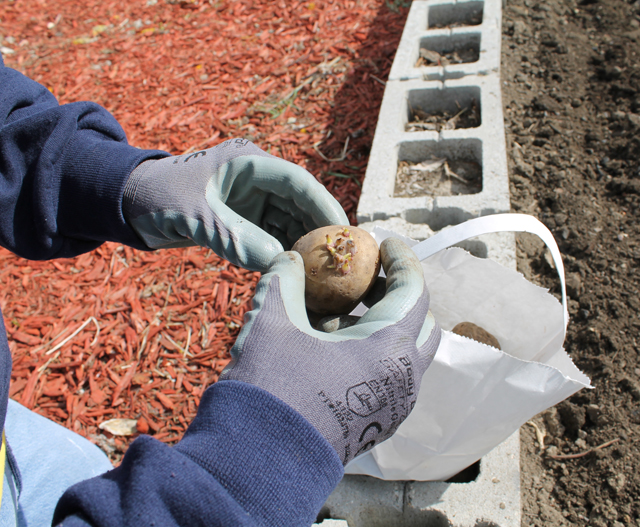 The great thing about potatoes is that you don’t start from scratch with a tiny little seed. You actually start with a regular ol’ potato. More specifically, you start with a seed potato. A seed potato is simply a potato that has grown “eyes,” white root looking thingies that grow out of the potato. We picked up two pounds of Kennebec seed potatoes at Piggly Wiggly. Hopefully next year we’ll have our own potatoes leftover from this year’s crop to re-plant! 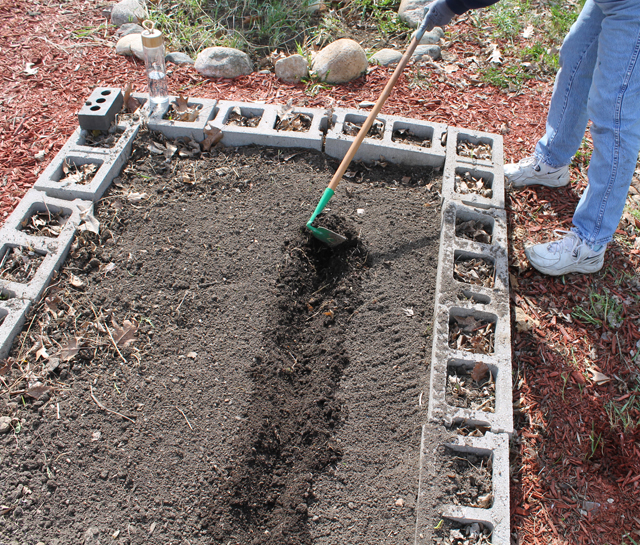 First, prepare your soil. We already have some raised beds that the previous owners of the Dream House had created. Using a hoe, we turned the soil in the raised beds. Translation: we dug down below the surface and pulled some of the richer, wetter dirt above ground. If you’re working with a larger garden, you can use a garden tiller to turn the soil. After the soil was prepped, we dug two shallow channels with the hoe. 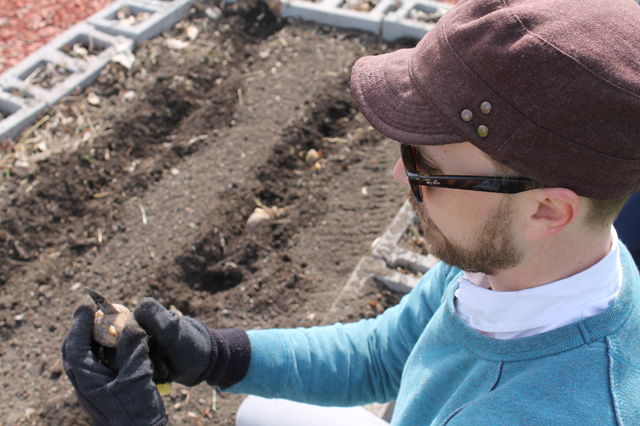 If your seed potatoes have multiple eyes, you can slice them. You’ll want at least three strong eyes on the potato that you plant. Some of our potatoes only had one small group of eyes so we planted them whole. 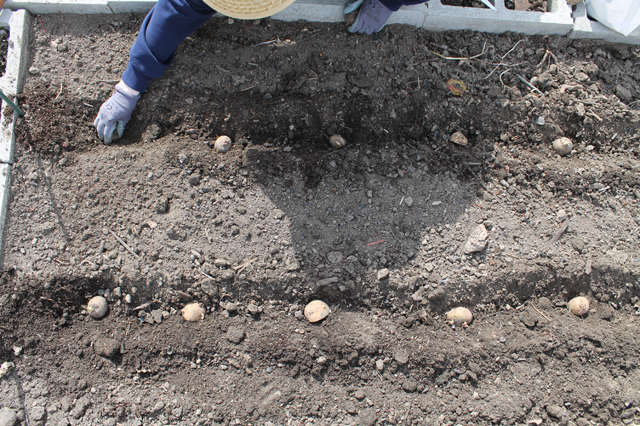 Place the potatoes eye side up in the channels, leaving about twelve inches between each one. As my mom commented when I was worrying about whether we were doing it right, “People have been growing food since the beginning of time. It can’t be that hard.” 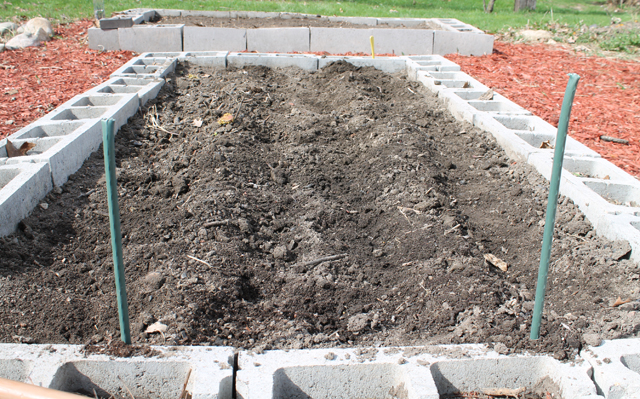 Cover the channels into which you’ve planted the potatoes with a small mound of dirt. You may also want to use some sort of marker to indicate where the potatoes have been planted. 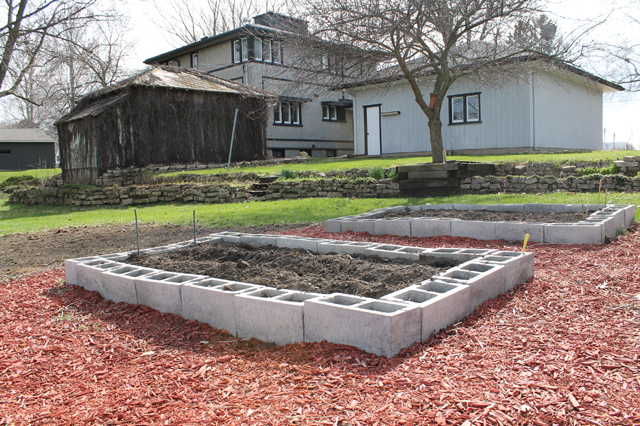 And then we wait. In a few months we hope to have a big crop of potatoes. Until then, you can bet I’ll be checking the garden every other day to see if there’s been any growth!

**A note about these raised beds. The Mister and I really hate the cement blocks that were used to create the raised beds. We have an equally strong distaste for the red mulch. All winter long we talked about our grand plans to pull out the blocks, scoop up the red mulch and start over with the garden. And then we realized that we had to pick our battles. There are more than enough projects around the house to keep us busy this spring so we decided to leave the raised beds as they are and wait until next year for a big overhaul.

Spring Treat: Lily of the Valley on the Bedside Table

Fresh Air! Our First Use of the Clothesline