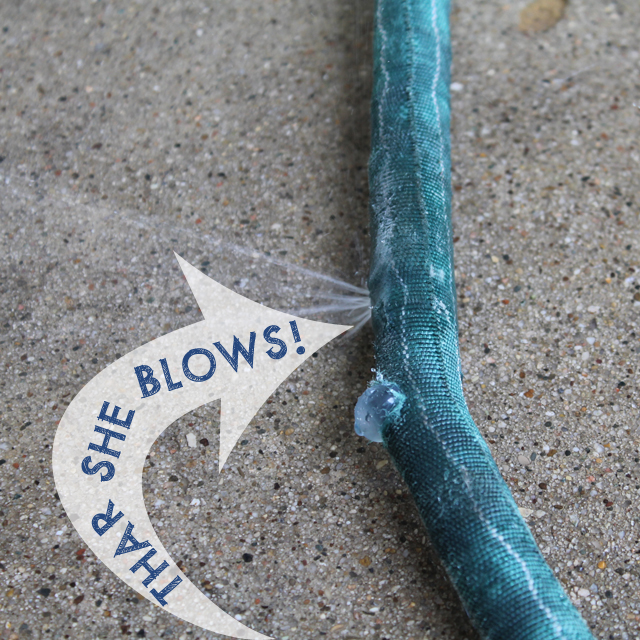 Mind you, I followed all the instructions that came with the Pocket Hose. I disconnected the hose from the faucet after every use and stored it in our garage. And yet even with those preventive measures, the hose lasted just over a month before it started to leak.

It’s hard to see in the first video so here’s closeup video of the leak itself.

On the day that the leak first appeared the spray from the hole was more like a geyser. One minute I’m walking along watering the plants and the next thing I know there’s a little pop and a jet of water starts spraying from the middle of the house. I wish I had stopped to video the spray that day. But, you know, I had wet hands and, frankly, I was so annoyed by the hose’s failure that I couldn’t be bothered to stop and shoot it. If you had been here with me you would have witnessed was a wild, uncontrollable spray that left everything in its path sopping wet. Yes, including me. I disconnected the hose that afternoon and then shelled out the $40 for a high quality, anti-kinking hose (which is what I should have done to begin with). Now that I’m back with camera in hand, the spray from the leak isn’t quite as menacing. Now it looks more like a slow leak than a wild geyser of a spray.

Because I blogged about the Pocket Hose when I first got it, I know that we purchased it sometime around June 25th. That’s less than 60 days of use before it failed. I would say we got about a dozen uses from the hose before it developed a leak. At $20, that works out t more than $1 per use.

While the Pocket Hose can still be used in its current leaky condition, it’s obviously not ideal. Plus, as you can see from the top photo, it looks like another hole is forming in the hose. Holy hoses, Batman, this thing is a rip off!