Welcome to the Carriage House: An Artful Mess 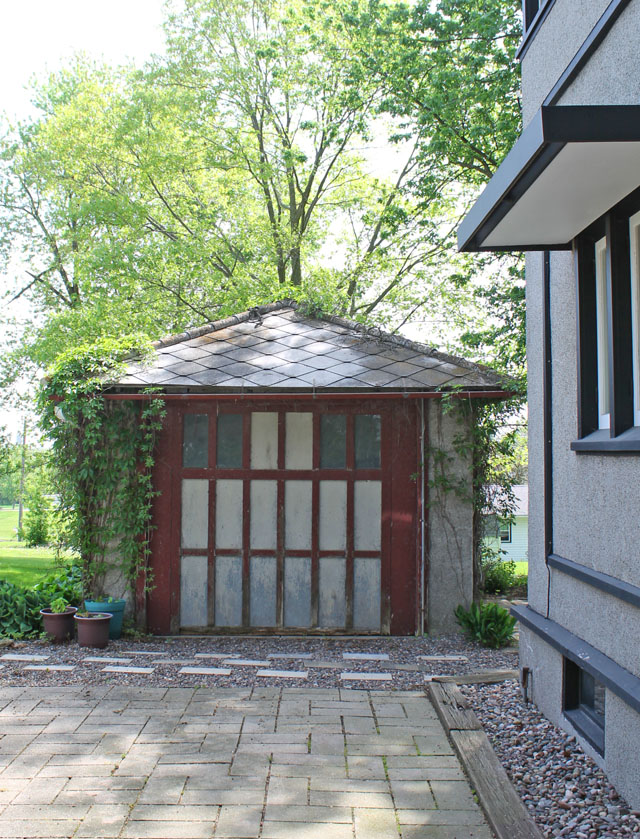 Back in 1917, when Delbert and Grace Meier had their American System Built home constructed, they built what would have then been called a coach house. This is where the couple would have parked their Model T or Monroe Roadster or whatever they were driving at the time. A small boxy structure, the carriage house is covered in the same stucco as the house and topped with the original slate roof. It’s no longer used for housing an automobile but it’s very much a useful part of the house. 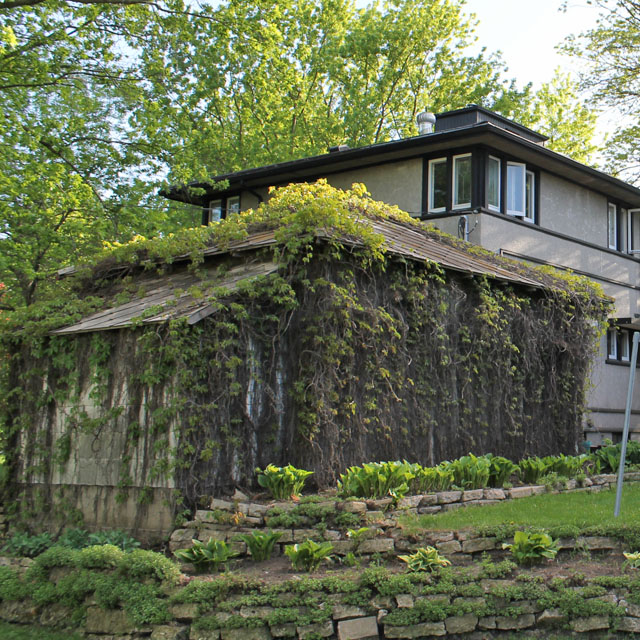 Over the years, little has changed with the carriage house. Vines have created a thick covering that we joke are probably holding the structure together. At some point in the 1950’s Mr. Meier added a bump out to the back of the garage to accommodate the growing girth of cars of the day. A later owner built a newer, bigger garage and now the carriage house acts mostly as a woodshed.

The big roll up door, which is old but probably not the original, is not easy to raise. It takes a lot of strength and a footstool to get the door to stay up on the track. In an I’ll-look-back-at-this-and-laugh moment, I spent a panicked fifteen minutes locked inside the carriage house a few weeks ago. Having raised the big door on my own, I stepped inside and started busying myself with the clean up. A few minutes later, the door slid down the track and slammed to the ground. It took me a moment to realize that the side door, which locks from the outside, was still in fact locked. I think I briefly turned into the Incredible Hulk that day because I was able to heave the big, heavy door open again. I put the great carriage house clean up on pause after that harrowing experience. 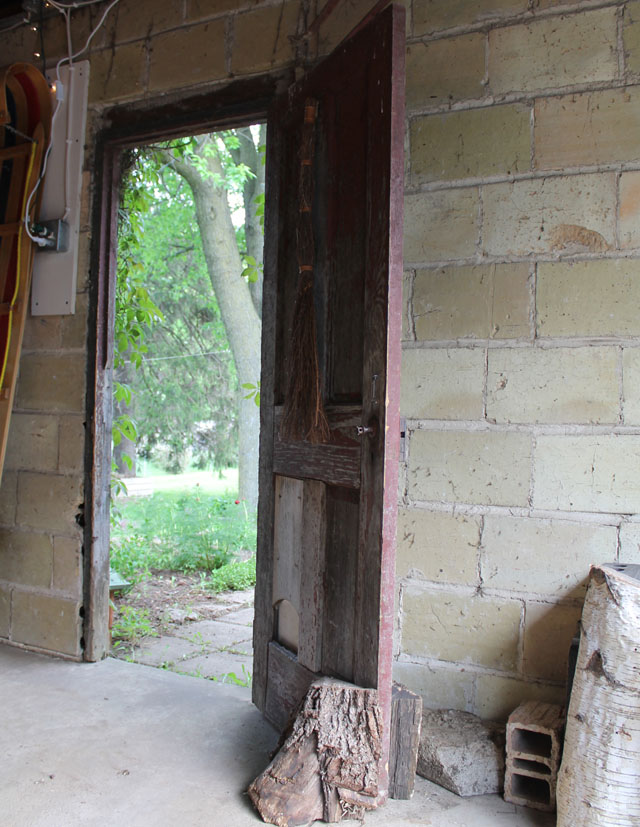 For our Memorial Day barbecue, however, I really wanted to clean up the scattered wood remnants and other outer detritus that was littering the carriage house so that we could incorporate the space into our outdoor entertaining. I unlocked the side door (lesson learned!), pushed open the big door and started the clean up. Then I used what we had lying around to create what I call an artful mess. 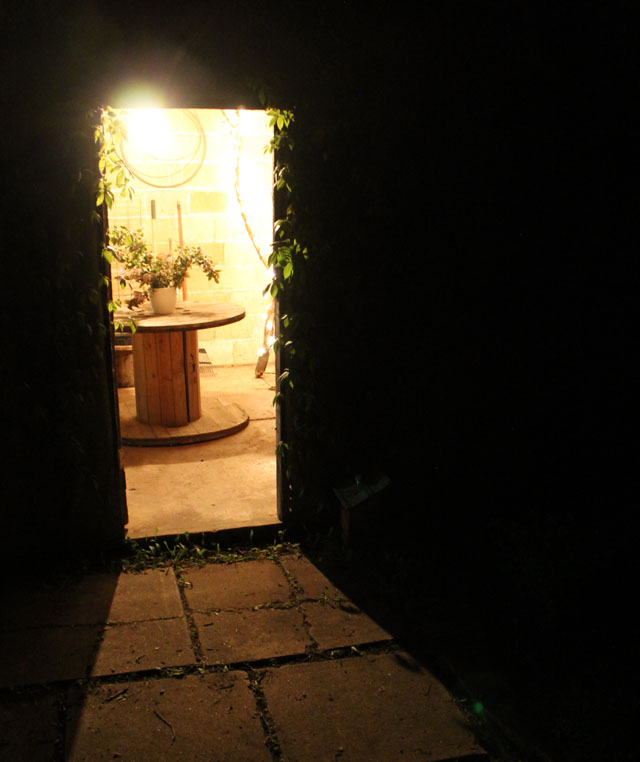 I used the big cable reel that had been left in the backyard by the previous owners as a table in the middle of the carriage house. I think the previous owners of the house had also been using the reel as a table. Only they had set it up by the fire pit. When I moved the reel out of the backyard, our neighbor commented how happy she was to see that it had been moved. We were happy, too. The reel was an absolute eyesore in the backyard. And while I don’t love it in the carriage house either, it does at least have purpose here. Namely, to hold a flower pot with tree branches stuck in it. 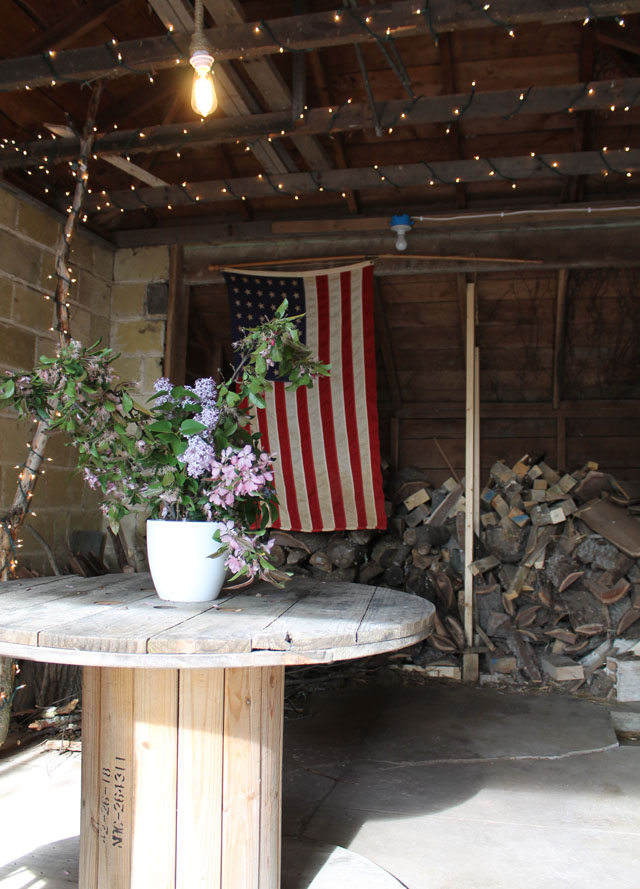 It’s amazing to see that we’ve burned through a large portion of the firewood left in the carriage house by the previous owners. The wood was stacked to the ceiling when we moved in. Now it only reaches about halfway to the ceiling. At some point, you may hear one of us bellow out, “Christina! Bring me the ax!” (Any Mommie Dearest fans out there?) 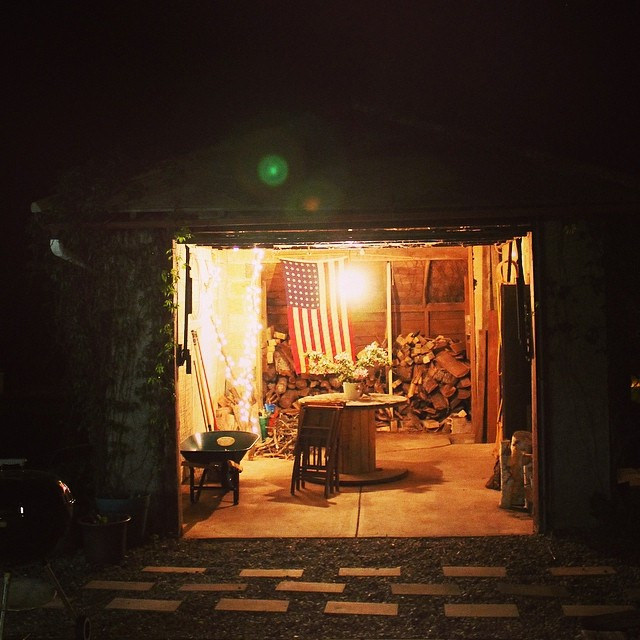 You know what’s also amazing? The transformative power of white Christmas lights. Wrapping a long string of white lights around the rafters went a long way in dressing up the carriage house. I also wrapped lights around a long branch that had fallen into our yard. And just like that a tree’s castoff became a decorative treasure. And, of course, an American flag makes everything look folksy, right?