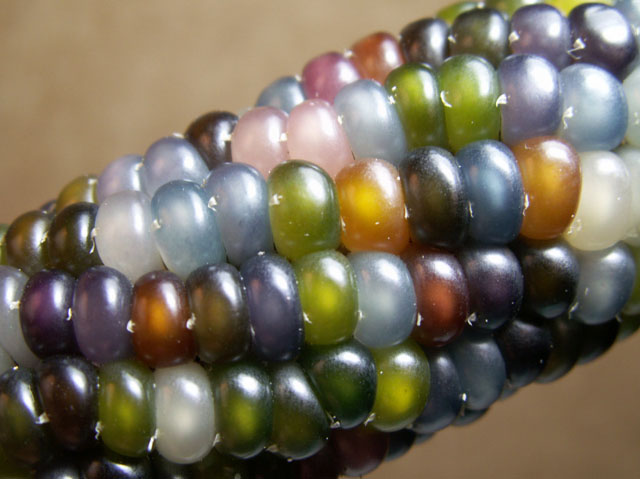 At first glance, this photo may look like beaded jewelry, a bracelet perhaps. But it’s actually corn. Yes, corn. As in corn on the cob! Have you ever seen such a beautiful vegetable? It’s just one of the gorgeous specimens in NPR’s blog post Gardeners’ Gems: Designer Crops That Will Wow The Neighbors.

The corn shown above is called Glass Gem Corn. And as beautiful as it is to look at, its story is equally awesome:

The story begins decades ago with Carl Barnes, a part-Cherokee farmer and breeder in Oklahoma who started crossing different Native American corns for beauty. He chose vibrant, translucent colors and eventually ended up with Glass Gem Corn. One of Barnes’ students, Greg Schoen, gifted the seeds to Native Seeds/SEARCH, a non-profit seed conservation group, in Tucson, Ariz.

We already have our potatoes in the ground but it’s not too late to plant some of the other designer produce that’s mentioned in the post. Maybe pineberries, the pineapple/strawberry hybrid that dates back to 1750’s Europe. I mean, why settle for plain ol’ strawberries when we could have the white and pink pineberries that were saved from extinction by Dutch strawberry breeder Hans De Jongh?

Check out the full post – Gardeners’ Gems: Designer Crops That Will Wow The Neighbors – on NPR.

Beside My Bed: Lindsay Humes of The Garden Apt.

Welcome to the Club Part 2: It Could Be Worse